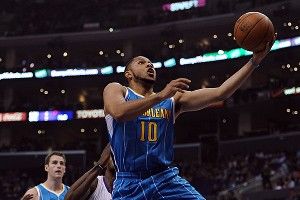 With the 2012 season winding down, the list of NBA free agents is here, and, well, it sure isn’t 2010 anymore. With enough Diet Coke and backroom talks to fill a lifetime, the biggest prize of this year’s free agent crop elected to stay at Disney World for another year. What’s left is a class that, while lacking superstars, is full of impact pieces for the right team. We sifted through the list so you don’t have to, and below are five types of free agents we think teams will be looking for this summer.

In a class that’s thick around the middle and light at the top, Deron Williams and Eric Gordon figure to be two of the major gets this summer. When Dwight Howard lost his mind earlier this spring, it left Williams as the top guy in the class. A superstar point guard who can both score and be an excellent facilitator, Williams will completely reshape any team that lands him. Dallas spent much of this past offseason working its way into some cap room to bring the local guy home, and the understanding is that Mark Cuban is ready to back the truck up. The problem is there’s a Russian guy in Brooklyn with a lot more money. My guess is that Mikhail Prokhorov isn’t too interested in showcasing his new $1 billion arena with Johan Petro and @blackboipachino, and the Nets will be throwing plenty of cash D-Will’s way. If Dallas does manage to coax Williams to Texas, it’ll be a great way to properly use the last few years of Dirk Nowitzki’s career. Williams isn’t the best player on a championship team, but paired with another star, he’s a major part of one.

Gordon isn’t the superstar Williams is, but there’s a reason he was the centerpiece of a trade for the league’s best point guard. The most anyone saw of the Clippers two years ago was Blake Griffin dunking on people’s heads while L.A. lost by 15. Interesting tidbit, though: This dude can play. Like, really play. Gordon is a born scorer who makes up for a 6-foot-3 frame with plenty of burst and one hell of a shooting stroke. He’s restricted, and though rumors have him tied to his hometown Pacers, Larry Bird has publicly said Indiana wants to re-sign its guys (George Hill and Roy Hibbert). The Hornets will have a right to match whatever any team does end up giving, and at this point, they’d be remiss to pass that up. Gordon can be an All-Star for a long time.

As Kevin Garnett had a second-half resurrection in Boston, Steve Nash just kept on doing what Steve Nash does, and never really needed one of his own. At 38, Nash averaged double-digit assists for the seventh time in the past eight seasons on a Suns team that wasn’t exactly flush with scorers. In recent years, as Amar’e Stoudemire skipped town and owner Robert Sarver systematically did everything he could to cripple his own team, Nash stood pat with the Suns. Now, no trade needs demanding, and Nash will be left to choose his destination for one more shot at a title. Miami has been seen as a possibility since last offseason, and with Derrick Rose’s knee injury likely to keep him out for most of next year, the Bulls have reportedly expressed interest in using the allure of a championship to bring Nash in at a discount. No one in the league has done a better job of keeping his body right than Nash, and even as he’s set to turn 39 next February, it seems that either team would jump at the chance.

For as valuable as Garnett was to the Celtics during these playoffs, there is a downside to the 36-year-old big man’s dominance — he very well could have priced himself out of Boston. With Ray Allen and his $10 million cap hit expected to come off the books, it would seem like Danny Ainge would do everything within reason to bring KG back. He was the most important player on a team that pushed Miami to the brink, and he was playing his best basketball at season’s end. The other team that’s already expressed interest is San Antonio, a destination that would pair Garnett with the player he’s been compared to for most of his career. The reality is that a few million bucks here or there probably isn’t going to make the difference. Garnett has made upwards of $300 million over his 17 years in the league, and if his loyalty to the Celtics is anywhere near where it seems to be, he’ll be back in green for the rest of his career.

There were glimpses in this year’s playoffs of what JaVale McGee might be in the right situation. His Game 5 performance against the Lakers was a perfect sample of the highs and lows. McGee outplayed Andrew Bynum for all four quarters on his way to 21 points and 14 rebounds, but he also managed to make at least four offensive plays that did not resemble basketball. McGee is still just 24, and with the cap room the Nuggets have, they probably can and should match any reasonable offer for the restricted free agent. The influence of a stable environment, solid coaching staff, and winning situation were evident in just half a season with Denver. A couple more, and McGee might just be the player some think he can be.

Earlier this season, when the Bucks traded for Monta Ellis, Jay Kang wrote that the microwave scorer has become an undervalued commodity in the NBA. Teams like the Bulls and Lakers were in desperate need of a player who could create his own shot when things broke down, and Ellis is that type of player. Strangely enough, it’s Williams — a player who has been linked with Ellis since both came into the league out of high school — who represents the best version of that ingredient among this year’s free agents. A team with plenty of defense and a dearth of scoring, Philadelphia is likely to use its ability to give Williams one more year on any deal to its advantage. Still, he represents an intriguing option for any team feeling it needs instant offense. Those players are available throughout this class — Jamal Crawford, Nick Young, J.R. Smith, Jason Terry — but coming off a season as one of the best sixth men in the league, Williams is the most appealing of the group.

Let’s be frank. This is not the Golden Age of NBA centers. The guys who can really play (Dwight Howard, Andrew Bynum, Marc Gasol) are a rarity, and when they do come about, they get paid. Those three are set to make a combined $50 million next season. Gasol’s payday was largely a product of an excellent 2011 postseason in which he proved to be maybe the most offensively skilled center in the league. Hawes isn’t nearly the player Gasol is, and he obviously isn’t expected to get anywhere near the $13.9 million Gasol will haul in next season. Still, he’s a 24-year-old, 7-foot-1 big man who showed during these playoffs that he’s a skilled passer and more. It wouldn’t be a surprise to see a team offer him around $7 million a year.

Hibbert also benefited from a strong playoff showing. He often seemed to be the difference in the Pacers’ series against Miami as he roamed the paint on defense and was able to consistently score with his back to the basket. As a restricted free agent, Indiana can match any offer Hibbert gets, and they’ve said they plan on doing so. Whatever that offer is, it figures to be a big one. In a world where DeAndre Jordan makes $10.5 million a year, Hibbert is worth at least 12.