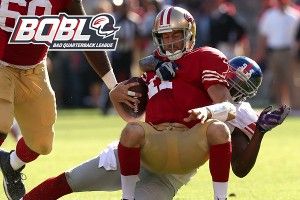 The way we define a benching is by asking the question, “If he had played well, would he still be on the field?” I bring this up because there were some borderline benching calls this week — a couple of those sympathy benchings, those-bruised ego benchings, those “If you throw another pick I am going to strangle you on national television so I am just going to put in T.J. Yates right now” benchings. The BQBL committee (read: some dude we’ve never met) has reached the conclusion that both Matt Schaub and Alex Smith were the recipients of this type of merciful benching this week. Even with those extra 35 points, their combined terriblocity couldn’t top what Philip Michael Rivers did last night. When Philip Rivers plays a division rival on Monday night, it doesn’t just go poorly, it goes straight Shakespearean tragedy.

Chargers (Philip Rivers), 110 points: It’s Tuesday afternoon, and we’ve already heard it all by now: Philip Rivers’s poor decisions, Peyton Manning’s veteran brilliance, blah blahbity blah blah blah. Chargers fans have every right to be disappointed in Rivers’s performance with the four picks, two fumbles, and general TAINTiness, but BQBLers aren’t upset about his poor play on the field; they are upset about the unscored points that he left on it. If Philip Rivers is going to go on national television and have a six-turnover game, we fully expect him to have at least seven or eight teammate/coach/fan arguments. What happened to the fiery Rivers that used to yell at his own fans? What happened to the Philip Rivers that looked like such a jerk his face launched a website? When he approached the postgame press conference podium, I fully expected him to have no shirt on, blood all over his face, and a necklace made of the ears of his receiving corps. What actually happened? Rivers was calm, measured, and pretty coherent. When asked how much the loss hurt, Rivers responded, “Well, ya know, every loss hurts, ya know, regardless of what negative plays or how you lose, it’s rough, especially when you had such a big lead and, ah, so much was at stake early in the year in a division game so, um, not the way you want to go into a bye week and certainly not the way I wanted to perform, but ah, 3-3, and you regroup and you get ready to go.” Sure, it might have been the longest sentence ever uttered by the human species, but it was exactly what he was supposed to say. He worked hard to maintain the kinder, gentler Rivers 2.0 persona, but when you break down his answers about the Broncos’ second-half turnaround, you can see how he barely represses his true dickhead self:

Two side notes about this game that need be recorded for the BQBL archives:

1. Peyton Manning (TAINTon Manning?) had a fantastically atrocious tackle attempt on his TAINT. He kind of knelt down in front of the dude like you would kneel down behind someone your buddy was going to push over. When that didn’t work, he swung a foot out that missed by five yards. It was something rookie BQBs could learn a thing or two from.
2) The Touchdown After Fumble needs a better acronym. Can you help us out in the comments? The closest I got was “Six Points Letup by Incurred Fumble.” I’ll be honest, it was a reach. I really just wanted to write the sentence, “Michael Vick lost on Sunday because he had two SPLIFs during the game.”

OK, back to the scoring …

49ers (Alex Smith, Colin Kaepernick), 74 points: It is no secret that the 49ers hide Alex Smith’s lack of ability behind conservative play calling and one of the best defenses in the league. And why not? It works. Coming into the game, Alex had only thrown one interception on the season, and the Niners were 4-1. What do you do in the NFL if you have a routine that works? You change it. For whatever reason, Jim Harbaugh decided that this week was going to be the week that second-year quarterback Colin Kaepernick was going to platoon with Smith in some sort of gimmicky, semi-Wildcat, junk pitch of a game plan. It did not work. Alex Smith threw three interceptions in this game, only two less than he threw the entire 2011 season. The Niners lost the game, and they may also have lost Alex Smith’s mojo. Let’s review the game drive-by-drive. Offensive impotence like this must be savored:

First Drive: March the ball down the field, make field goal.
Alex Smith’s Confidence Level: George Clooney looking to hook up, pulling his yacht up to a nightclub.

Fifth Drive: Three and out.
Alex Smith’s Confidence Level: Steve Nash in a kissing scene with Will Ferrell in Semi-Pro.

10th Drive: Smith starts the drive with a 12-yard pass, Kaeperick takes over and runs three no-huddle plays for six yards, Smith comes back in for a sack, punt.
Alex Smith’s Confidence Level: Go for dip in the ocean, get circled by fins.

11th Drive: Gets one first down, fumbles, gets sacked, punts, but hey, he played the whole series this time like a real starting quarterback!
Alex Smith’s Confidence Level: Imprisoned by Somali pirates.

I feel like all of Harbaugh’s players and fellow coaches thought it, but only his wife would come out and say it: “Hey, Jim, what the hell were you thinking with that whole Kaepernick thing? Let’s not try that again, OK?”

Texans (Matt Schaub and T.J. Yates), 74 points: On Sunday night, it all came apart for Matthew Rutledge Schaub in the fourth quarter. The wheels completely came off, and what was a semi-enjoyable, high-scoring cherry on your football Sunday (see what I did there?) turned into a rout that sent Schaub rocketing to the top of the BQBL leader board. When he took the field with 14:46 left in the fourth, the Texans were within 17 points and looking to get back in the game — an improbable mission, but not yet impossible. His first pass attempt deep to Andre Johnson fell incomplete. His second pass attempt, for Keshawn Martin, fell into the arms of Sam Shields, who jumped the route like he was in Schaub’s huddle. Schaub was then forced to watch Aaron Rogers throw his sixth touchdown pass of the day. Schaub then marched the Texans 60 yards down the field before throwing his second pick of the quarter.

When the Texans got the ball back, Schaub got word that he would be watching as T.J. Yates threw the Texans’ third interception of the quarter. That begs the following question: “If you are Matt Schaub, are you happy that T.J. Yates threw that pick, or are you disappointed? I honestly don’t know how I would feel in his shoes. Oh wait, sorry, I totally do — I’m ecstatic.

Chiefs (Brady Quinn), 56 points: I have been waiting a long time for this, Mr. Quinn. It isn’t often that a team starts a quarterback that has been on another team’s active roster for the previous two seasons and NOT PLAYED A SINGLE DOWN. Anytime you have the opportunity to sign a guy like that, you have to start him.

Bengals (Andy Dalton), 42 points: I feel like Andy Dalton is very upset about this loss, his TAINT, and especially the fact that he was outplayed by fellow redhead Brandon Weeden. Dalton shouldn’t worry, because he clearly has the most NFL upside. As far as BQBL upside, it’s The Ginger Cringer, hands down.

Looking at next week’s matchups, here are my predictions for the Week 7 top three (this is a new weekly thing that I will probably forget to do next week. Apologies in advance):

The Chargers Pee Their Pants (Again)