The Boston Red Sox have reportedly agreed to deals with both Pablo Sandoval and Hanley Ramirez (pending physicals), a combination of signings that could portend future moves and success or could end in spectacular failure.

CBS Sports’s Jon Heyman reports that Sandoval’s deal will fetch around $100 million over five years, while Fox Sports’s Ken Rosenthal reports that Ramirez’s deal will net $88 million over four years, with a vesting option for a fifth year at $22 million. Regardless of the exact terms, though, we know enough to assess the impact of these signings and to anticipate the ripple effects they could cause. Before we break down the risks that both deals carry, let’s start with the pros.

In signing two of the most highly coveted position players on the free-agent market, Boston would become a better team today than it was yesterday — and yesterday, it was pretty bad. In 2014, the Red Sox became the first team to complete a three-season stretch in which it went from last place to first place to last place in its division. Last season’s edition was both depressing and dull, featuring down years for key players, a miserable outfield, and a skeleton-crew starting rotation by season’s end. Boston finished second to last in the AL in park-adjusted offense, ahead of only the injury-ravaged Rangers. Signing Sandoval (who’s hit 22 percent better than league average on a park-adjusted basis in his career while adding gigantic playoff numbers) and Ramirez (who’s hit 33 percent better than league average in his career, and 35 percent better in 2014) all but guarantees better offensive results in 2015.

The timing would be smart too. The AL East was worse in 2014 than it had been in years, with the Yankees allowing more runs than they scored, the Rays seeing their six-year run of success crash with a 77-win season, and the Jays taking over as the MLB team with the longest playoff drought. While having two wild-card spots per league gives more teams a chance to compete, and while both 2014 World Series participants were wild-card winners, the easiest path to glory remains winning the division, making this AL East down cycle a good opportunity for the Red Sox to load up. A paper-thin free-agent market for bats will also make it tougher for Boston’s rivals to respond with big offensive signings of their own, thus forcing them to trade away significant talent if they want to improve their lineups.

But the biggest benefit of all is what signing Sandoval and Ramirez would allow GM Ben Cherington and his band of shrewd lieutenants to cook up on the trade market. As weird as it was for the Sox to finish last, then win the World Series, and then finish last again, one could argue that they’ve done exactly what any fan would want: win the big one, quickly recognize that they weren’t going to be able to repeat, and aggressively assemble assets when fate turned against them.

Sure, it wasn’t much fun being at Fenway in September, when the rotation featured the dynamic combination of Anthony Ranaudo, Brandon Workman, and a 55-year-old Oil Can Boyd.1 But forward-looking fans took comfort in the players whom Cherington had collected, including Yoenis Cespedes (via the Jon Lester trade with Oakland), Rusney Castillo (via the biggest signing ever for a Cuban player), Eduardo Rodriguez (via the Andrew Miller trade with Baltimore), Edwin Escobar (via the Jake Peavy trade with San Francisco), and, if they were feeling charitable, even Allen Craig and Joe Kelly (via the John Lackey trade with St. Louis). Once the season fell apart, the Red Sox began collecting as many pieces as possible, setting the stage for a busy 2014-15 hot stove session. With Sandoval and Ramirez now also onboard, the Sox have tons of trade chips at their disposal.

Granted, I would actually love to watch 55-year-old Oil Can Boyd in the big leagues, but I’m also a crazy person.

Boston’s biggest need, by a mile, is starting pitching. The current projected starting five looks something like this:

That’s … not so special. Now consider this possible projected lineup:

That’s a heavily right-handed but potentially dynamic batting order, especially if Betts (who’s an on-base fiend, projected by the notoriously optimistic Bill James Handbook to post a .405 OBP in 2015), Bogaerts (who’s still considered an elite talent despite a slow start to his career), and Castillo (who earned all of that money for a reason) take a step forward. What’s more, Sandoval’s nifty glove rounds out an excellent defensive infield, with the 24-year-old Vazquez already drawing praise as an elite receiver.

But what’s most striking about that projected lineup is the players not included in it, including Cespedes, Craig, Shane Victorino, Jackie Bradley Jr., Daniel Nava, Brock Holt, Will Middlebrooks, and Garin Cecchini. ESPN’s Buster Olney has already examined what each of those leftovers offers the Red Sox and potential trade partners, but here are the Cliff’s Notes: While none of those players other than Cespedes has a rightful claim to a lineup spot, several of them still offer real value. 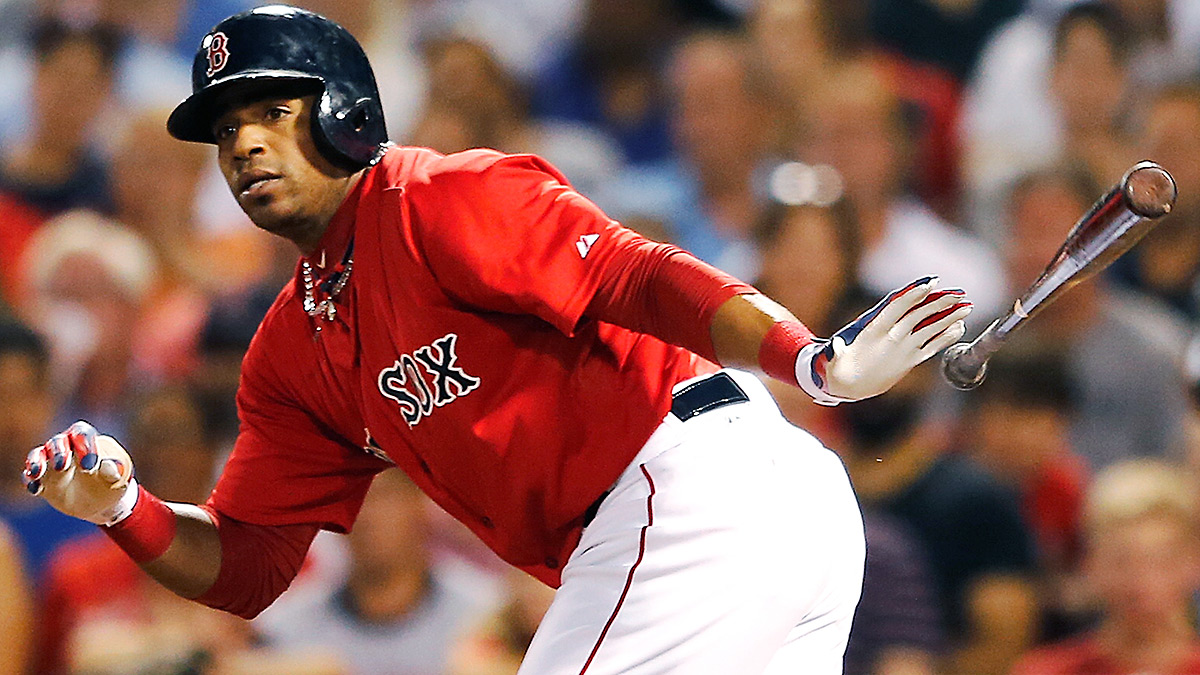 Now, Sox fans can close their eyes and wonder: If the A’s were able to parlay Cespedes into a Lester playoff race rental, could he and a few other assets be enough to entice the Phillies into a Cole Hamels trade? If that’s not an option, what about trading for one year of Jordan Zimmermann, plus either a long-term extension or a compensation draft pick? Mat Latos? Andrew Cashner? Ian Kennedy? These and other quality starting pitchers are viable trade candidates in a market that still has Lester, Max Scherzer, and James Shields sitting there for any spendy team to sign. In short, if there were ever a winter to have tons of hitters but not enough pitchers, this is it. If the Sox can add two better-than-average starters, they’ll have done exactly what they set out to do this offseason, giving them a real shot at becoming the first team to ever go worst to first to worst … and back to first again.

Here’s the problem: With so many other outfielders onboard, the Sox could have ended up in the same enviable position without adding Ramirez to play a position he’s never tried in his major league career. Unless, of course, Boston’s plan required landing an injury-prone malcontent on the wrong side of 30 who can’t field, ran one manager out of town, and caused half the Dodgers roster to scream hallelujah the second they heard he was gone … in which case, well done!

The Sox obviously hope Ramirez’s bat can make up for those shortcomings. His career .300/.373/.500 line and aforementioned 133 wRC+ look terrific even with a likely move from short to a less challenging defensive position. (The big caveat comes if Boston does something incredibly ballsy like trade Bogaerts to get that top-caliber starter, then sticks Hanley at short for a couple years. As crazy as that might sound, the Sox previously made due with some deeply flawed shortstops, parlaying a dynamic infield prospect into a trade for Josh Beckett, a key cog on some great Boston teams. That dynamic infield prospect, of course, was Hanley Ramirez.) His .283/.369/.448 line with the Dodgers in 2014 looks good, too, while his .345/.402/.638 demolition of NL pitchers in 2013 looks borderline illegal. Ramirez’s raw numbers could also improve thanks to a basic park adjustment, with the right-handed power hitter likely to benefit from the Green Monster more than a simple Dodger Stadium–to–Fenway recalibration would suggest.

But it’s hard to feel confident in hopes and coulds. Ramirez has gone from a speed demon who swiped 51 bases in each of his first two full seasons to a merely decent runner, and he’ll slow down further as he ages and his 225-pound frame expands. Betting on Ramirez’s age-31-to-34 (and 35, if he vests) seasons means hoping that he’ll be an outlier whose offense remains robust well past the point at which typical players peak in the post-PED era. What’s more, his injury woes compound those risks. Though Ramirez’s 2013 onslaught came in an 86-game season, players typically perform significantly worse in injury-plagued years, even on a per-game basis, and his last four seasons offer little reason to expect him to stay healthy:

It’s certainly possible that Ramirez will play a full campaign or perform even if he doesn’t, but the more negative scenarios become increasingly likely as he ages.

The impact of Ramirez’s clubhouse persona is much tougher to gauge. I try not to factor this stuff into player evaluations, since it’s subjective, tough to quantify, and might not even matter. Smart, analytically oriented writers have tried to quantify the impact of chemistry, but it remains a really tough nut to crack. Still, few players have elicited more negative reactions from those around him than has Ramirez, who had a well-publicized beef with former Marlins manager Fredi Gonzalez and who elicited some colorful text messages from former teammates upon the Boston news.

Former teammate of Hanley Ramirez described him in one word via text: "turd" #RedSox

If chemistry does matter, it’s odd to see a team that so recently took pride in its good-guy image en route to the World Series suddenly placing its faith in a player who’s been accused at various times of sulking, angering teammates, not hustling, and clashing with managers.

Sandoval doesn’t bring those personality concerns, but committing to him long-term still carries risk. The erstwhile Giant is two and a half years younger than Ramirez, is a skilled defender at third, owns three World Series rings, and has been a monster in the playoffs. However, he’s been a good but not great regular-season hitter, his ongoing weight fluctuations seem likely to affect his play as he ages, and even playoff results can vary wildly from year to year due to small-sample-size noise.

That said, this is still a deal that a wealthy team like the Red Sox can reasonably make in a thin free-agent market given its litany of needs, including left-handed hitting and strong defense. There are far fewer land mines here than with Ramirez.

So really, the fate of this grand experiment will likely come down to what the Sox do from here. If other teams view Boston’s collection of spare parts and prospects as insufficient for an impact trade, then signing one or more big-ticket free-agent pitchers will become a must, and there’s no guarantee that Lester, Scherzer, or Shields will pass on taking someone else’s money instead. If Boston enters next season with little more than Buchholz, Kelly, and pray it’s not smelly, this won’t end well.

Then again, maybe it’s fitting that baseball’s most high-variance team is adopting an incredibly high-risk, high-reward strategy that depends on a world-class flake and two or more blockbuster trades. If the Red Sox rally back to win the East in 2015, we shouldn’t be too surprised. But if Ramirez prompts torrents of boos by Memorial Day and Boston’s gambit fails, that shouldn’t be a shock either.