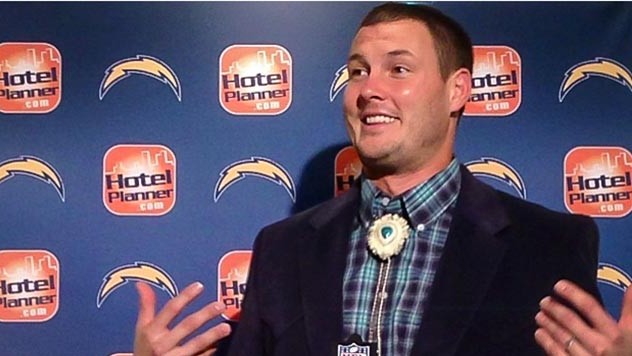 With men, there are two kinds of mistakes: The kind we make for them and the kinds they make for themselves. Just last night, for example, NBA commentator and Hall of Famer Calvin Murphy made one of his own. He discussed a Rockets win over the Celtics while wearing what, from where I sat at a bar, appeared to be a snakeskin-print suit in pencil-eraser pink. Murphy can often be found grinning in similarly hideous clothes. He makes you wonder what on earth he’s overcompensating for. You don’t know why he’s done it, and you don’t want to give him the satisfaction of asking.

But sometimes, the problem is us. A man makes a change, and we freak out. Philip Rivers spent the waning weeks of the football season in bolo ties and a pair of rattlesnake cowboy boots. This wasn’t a player going out on a limb. This was Texas and New Mexico and Arizona style. (Rivers is from Alabama.) This was anywhere that features a country-and-western outpost — ideally, a bolo is just a leather cord with a metal fastener that sits under the neck. Rivers kept wearing the bolos, and the bolos became a thing. Hashtags snowed. His San Diego Chargers, in fact, came up with #BOLOTieFriday: The team’s wormy lightning bolt logo was grafted onto a medallion.

Most of the freaking-out was good. Fans sent bolos to Rivers, and Rivers wore at least one. The manager of a San Diego Boot Barn told FoxSports.com that Rivers had stoked high demand for the tie. Politicians and celebrities fastened them up in tribute. After San Diego beat Cincinnati in the wild-card round, legendary New Jerseyan Richie Sambora wore a Chargers jersey to a Fox studio, sat holding a guitar on a stool, and argued, in song, that the bolo tie was responsible for the win.

Bobby Rubio, a story artist at Pixar, whipped up a cartoon still of Rivers with a lighting storm shooting from the bolo.

But as the tie turned into a craze, you could feel it getting away from Rivers, getting bigger than him, like the beards on the Boston Red Sox last year. He had to talk about the ties, and whether they were wearing him. The Broncos took care of that. On Sunday, Rivers arrived at Denver’s Mile High Stadium, dressed solemnly in a dark brown blazer over khakis, and a bolo whose metal fastener looked like a small animal skull. Not long after the team’s 24-17 loss, Rivers towered over a podium in a sleeveless T-shirt that gathered at his shoulders. He was still wearing eye-black. You could see a scar on his left arm. He looked like he was going back out to play the game again.

This happens with a big loss. Style suddenly seems absurd. How could it not? But Rivers had found himself this season. The new Chargers coach, Mike McCoy, is a trim, long-necked 41-year-old Californian. He sometimes wears simple, handsomely tailored suits, and thought his players should arrive to games doing the same. Dress codes have a way of imposing order, and getting you to think about conformity and transgression. Rivers did a little of both. He has said he wanted to wear something a little different, and in apparent consultation with his friend and backup quarterback, Charlie Whitehurst, he came up with the bolos, which he often wore with buckles, boots, khakis, a plaid shirt, and jacket.

Rivers seemed to find himself in these clothes. They made sense on him. He’s always seemed like Jon Voight in a PG-rated version of Midnight Cowboy: long in both length and old-fashioned innocence. The ties and the belt buckles also lent the impression of fun. The bolos caught on, but this isn’t a look you just go out and own. It’s as if Rivers spent the first half of the season doing a dry run, making sure it wasn’t the costume it would be on most men. His size ensured the bolos never upstaged him. The clothes themselves fit. The colors and the plaids popped. The shirt he wore after a regular-season Chargers win actually caught the turquoise oval on the arrowhead fastener. Rivers, or someone, was thinking about these clothes. He didn’t take it too far. He looked neither like a used-car salesman nor the singer in a country band from Red Hook, Brooklyn.

The clothes at most postgame press conferences tend to be overthought. But Rivers never seemed to be overdoing. We were. Maybe the sting of the Chargers’ playoff loss brought out a mild embarrassment that Rivers couldn’t be bothered to process. But it’s important that he understand it means the world that, for those weeks, he didn’t wear a rumpled suit. He didn’t show up with a pair of headphones around his neck or a backpack. He didn’t look like Calvin Murphy. No matter what happened last Sunday, Rivers spent the season as an inspired version of himself. He should keep looking like that.