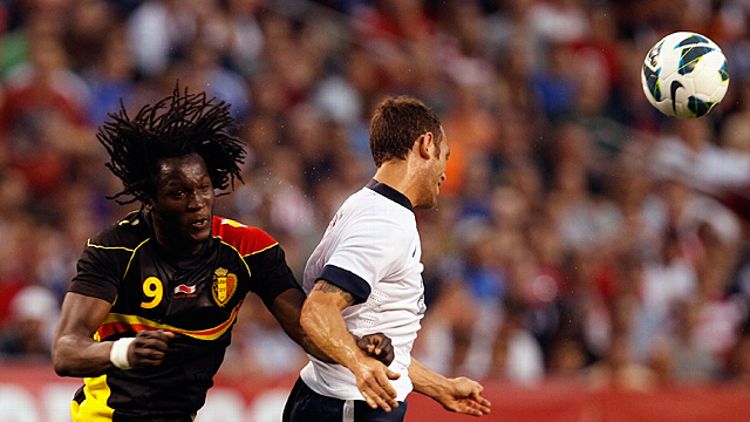 On Wednesday night, United States men’s national team coach Jurgen Klinsmann trotted out his 26th different starting lineup in the 26 matches he has coached. Not that it mattered. No combination of American players would have been good enough to contend with the young, creative, and excellent Belgium side that ran roughshod over the red, white, and blue at Cleveland’s FirstEnergy Stadium. Perhaps Captain America could have helped if he had taken a break from filming downtown. But probably not.

Klinsmann, who was without Michael Bradley, Fabian Johnson, Maurice Edu, and two or three other potential first-teamers, chose to start the Los Angeles Galaxy’s Omar Gonzalez and Brøndby IF’s Clarence Goodson as the central defensive pairing. That backfired almost immediately as Goodson and right back Geoff Cameron watched Belgium’s Kevin Mirallas pounce on a rebound and deftly chip his Everton teammate Tim Howard in the sixth minute. The forward swung a phantom baseball bat in celebration, which was rather wonderful, if the wrong sport for the venue. Perhaps pantomiming a Brandon Weeden interception required too much coordination.

That would be hard to believe, however, as team coordination is something Belgium has in abundance. Admittedly, the U.S. back four of Cameron, Gonzalez, Goodson, and DaMarcus Beasley — making his 100th appearance in the stars and stripes — didn’t have much experience playing as a unit, but it was remarkable how easily the visitors lost their defenders with overlapping runs and elegant backheels. Simple stuff but effective, and concerning if you’re, say, a coach watching his back line fall apart repeatedly or hearing from the fickle American fan base, which is content to complain constantly.

For a bit, the Americans fought back. Cameron made amends for his miscue in the 22nd minute, knocking a Clint Dempsey header into the back of the net after giving his marker a subtle push during the post–corner kick scrum. But in terms of offense, that was pretty much it for the U.S. in the first half. Belgium’s players had ideas on the ball; the Americans, more or less, did not. More charitably, the ideas came but did so a half second or two later than they should, at which time the opposition was prepared. The first-half heat map offered evidence of a relatively even match. The eye test showed something else entirely.

Klinsmann made two changes at halftime, inserting Brad Guzan for Howard and Eddie Johnson for Jozy Altidore, who still can’t score for the U.S. (The strangest moment of the night came in the first half, when Altidore whipped off his uniform, threw off his undershirt, and put his jersey back on in the time it took Graham Zusi to take a corner kick.) Belgium responded to the reinforcements by scoring three more times. Christian Benteke tallied two against his Aston Villa teammate Guzan, and Everton’s ball of hair Marouane Fellaini had another, breaking his 10-game international scoring drought. So that’s nice for him.

But hey, it wasn’t all bad for the home side. After all, the regular FirstEnergy fans console themselves with moral victories, too. Stuart Holden made his first appearance for the U.S. since October 12, 2010, after nearly three years of battling injuries. (Amazingly, it was only the second-most-inspiring U.S. Soccer–related comeback of the week.) Jermaine Jones played smart until the very end and again proved that he isn’t afraid of the best teams in the world. Beasley put in another strongish performance at left back, showing his ability to hustle, attack, and make sneaky, off-ball runs behind a defender’s back. The only concern: He’s slight, picks up knocks throughout the game, and seems to end up hurt. You have to wonder how he’d hold up over a few games in a row, but don’t question his heart. Gonzalez made mistakes in the back, but Tuesday night was his seventh cap and it was a friendly. As long as he learns, those errors don’t matter. And Clint Dempsey scored again, coldheartedly stepping to the penalty spot after Costa Rican referee Jeffrey Solis called a Joey Crawford–esque penalty. That absurd confidence continues to be the American’s best, and sometimes only, weapon.

So yes, the U.S. got blown out by a country whose population is 500,000 less than the state of Ohio’s. And yes, Klinsmann has issues in attack and defense and, to a lesser but still serious extent, the midfield. And yes, the opponent didn’t even have Chelsea wunderkind Eden Hazard. But no, this is not the end of the world. For one thing, Belgium is just a better team. For another, there is another game around the corner. Four, in fact. And three of them matter way more than the result Tuesday night.

On Sunday, the U.S. plays a friendly against Germany, followed by a trio of World Cup qualifiers: at Jamaica, against Panama, against Honduras. The first match presents a similar challenge to the game in Cleveland: a difficult test against a strong opponent. Germany is missing some of its stars but easily dispatched Ecuador hours before the Americans took the field against Belgium and, oh right, this is personal since Klinsmann played for Germany and coached the squad in the 2006 World Cup. He’ll want to beat Jogi Löw, his former assistant, who took over after he left and has retroactively gotten much of the credit for transforming Die Mannschaft into its current world-beating incarnation.

A year ago, the fixture could have been cause for concern, as the ever-competitive Klinsmann might have done too much to try to win and put his charges through too much before vital qualifiers. But, to his credit, the German is learned the difficulty of playing in CONCACAF, where nothing is as it seems and he has another, better score to settle. Namely, beating Jamaica in Kingston. The Americans lost there last September, one of the low points of the Jurgen Klinsmann era. The coach would certainly enjoy beating Germany, but he’s desperate to succeed at the Office, as Jamaica’s stadium/party venue/house of fun is known. The team is as well, and will be better prepared this time.

A draw or win in the first qualifier would give the Americans a real chance to finish the three-game set with seven or nine points and assert itself in the Hexagonal table with four games to go. (For all the U.S.’s struggles in CONCACAF on the road, the team rarely loses at home in qualifying.) That would get Klinsmann, who looked miserable on the bench for most of the second half against Belgium, flashing that big smile again. He’s learning that when it comes to U.S. Soccer, it’s not how you start but how you finish. Which is good because the start of this latest bunch of national team activity couldn’t have been much worse.