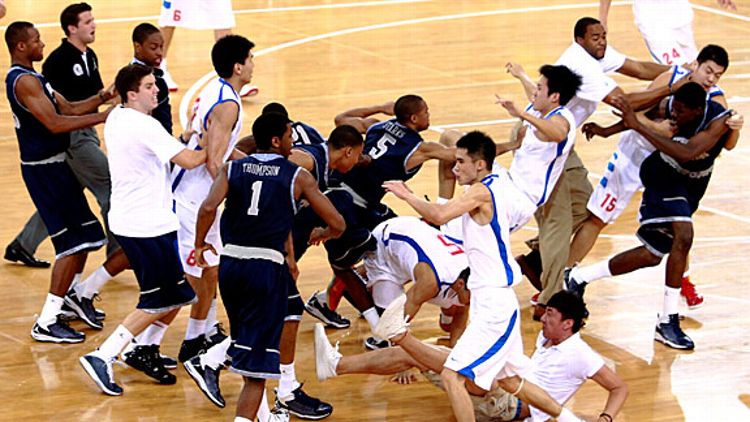 Tim Burke’s day started pretty early on Thursday. Not long after the 32-year-old SportsGrid video editor woke up, he was frantically searching online for a two-minute clip that sports fans around the world wanted to watch.

SportsGrid’s video, an on-court brawl between Georgetown and the Bayi Rockets, had been viewed more than 666,000 times by Friday morning, a number that doesn’t include eyeballs from television spots. It was a viral sensation for Burke, who started taking screencaps in 2004, when he was too enthralled by Don Cherry’s splendorous wardrobe not to preserve it for posterity. This clip has more commercial appeal than any of Cherry’s floral-patterned suits. It’s already the most-viewed video Burke has ever uploaded, beating even a clip that was linked by the Drudge Report last month.

“I put more work into finding this than I put into finding pretty much anything in my life,” Burke said Thursday around midnight. He was with his eight cable tuners and two computers in Jacksonville, Fla., where he previously worked as a communications professor before turning this hobby into a full-time job. Burke said he typically finds videos by flipping through live games that he records and monitoring Twitter for updates. His coup Thursday was more complicated.

You Ever See a Bumper Sticker on a Maybach?

Burke started looking for footage of the fight that spoiled Georgetown’s goodwill tour as soon as it happened. He searched for a few Chinese phrases on Sina Weibo, a social-media site that is essentially a cross between Facebook and Twitter and hosts 57 percent of China’s microblogging market share. It wasn’t easy. “How one person might spell the word Georgetown would be different from somebody else,” he said. Burke also picked up key words like “basketball” and “Rockets,” the name of the Chinese team with a reputation for fisticuffs, but even those relatively simple terms proved problematic. “Most people thought I was looking for Yao Ming videos,” he said.

Eventually — after rewriting and refreshing long enough — he spotted the video that had not been uploaded until minutes earlier. At 1:32 p.m., almost five hours after beginning his search, Burke published his post.

Then came the torrent of attention: links, embeds, and licensing requests from basically every journalistic outlet that covers sports. As someone who works with videos on the Internet, Burke has grown accustomed to crediting his sources and abiding by fair-use regulations. On Thursday, though, he found himself on the other side of the news cycle. Photos from the melee had already hit the wires when Burke was pecking away in Chinese characters. It was the video he turned up — and more footage that later surfaced and, early Friday morning, Burke synced with the original — that depicted the rowdy scene in all its visceral detail.

Burke celebrated all this sleuthing at 3 p.m. by grabbing a sandwich, the first thing he had consumed since a cup of coffee in the morning. “There’s always some sort of pride when it comes to finding video I know I’m looking for,” he said. “This was that, plus a massive language and, to some degree, Chinese firewall, obstacles. It was like upping the difficulty level by 10.” Finally, around 5:40 p.m., Burke took a nap during Pardon the Interruption. He dozed off right after he saw a certain video in the show’s first segment.

Filed Under: Georgetown, Things On the Internet, Viral Videos, Youtube