Butler’s Back: Can the Rejuvenated Bulldogs Make Another Cinderella Run? 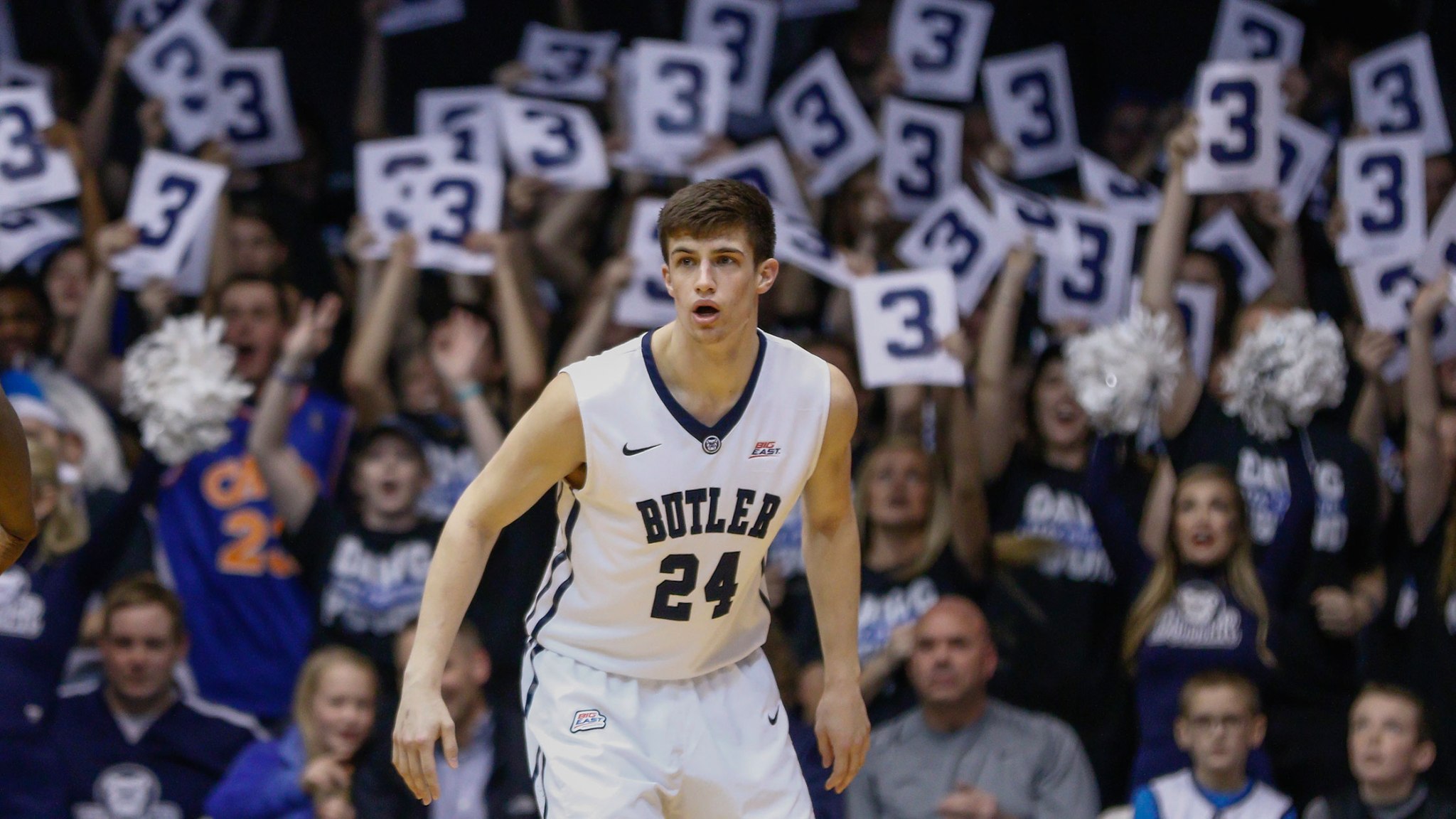 Moments before their final home game of the season, the Butler Bulldogs are lined up in front of their bench, soaking up the atmosphere of Hinkle Fieldhouse one last time. A Lutheran church choir in khaki pants and red polos belts out the national anthem, and the noise bounces off the faded brick walls and iconic arched roof overhead. The pep band kicks in from its perch in the low-hanging balcony. A bulldog named Trip waddles over the timeline. It’s basically perfect.

Until tipoff, at least. Georgetown’s interior length bothers wide-body Roosevelt Jones, Butler’s second-leading scorer, who finishes 2-of-10 from the floor. Sophomore forward Andrew Chrabascz, battling a hand injury, misses all six of his free throws. And Indianapolis native D’Vauntes Smith-Rivera makes a few heady plays for the Hoyas down the stretch to seal the 60-54 win, an old-school Big East slugfest. Sitting behind his alma mater’s bench, the Pacers’ Roy Hibbert dances around in long-limbed glee. A few minutes later, with his beaming father on his right and his weeping mother on his left, guard Alex Barlow will endure postgame senior night festivities by staring stoically at the floor in front of him, frustrated that he couldn’t make one more play.

In the media room afterward, elbows resting on a rickety banquet table, head coach Chris Holtmann repeats the same phrase three or four times, as if anyone who has followed Butler basketball since the mid-major days had forgotten: “This is what we signed up for.” 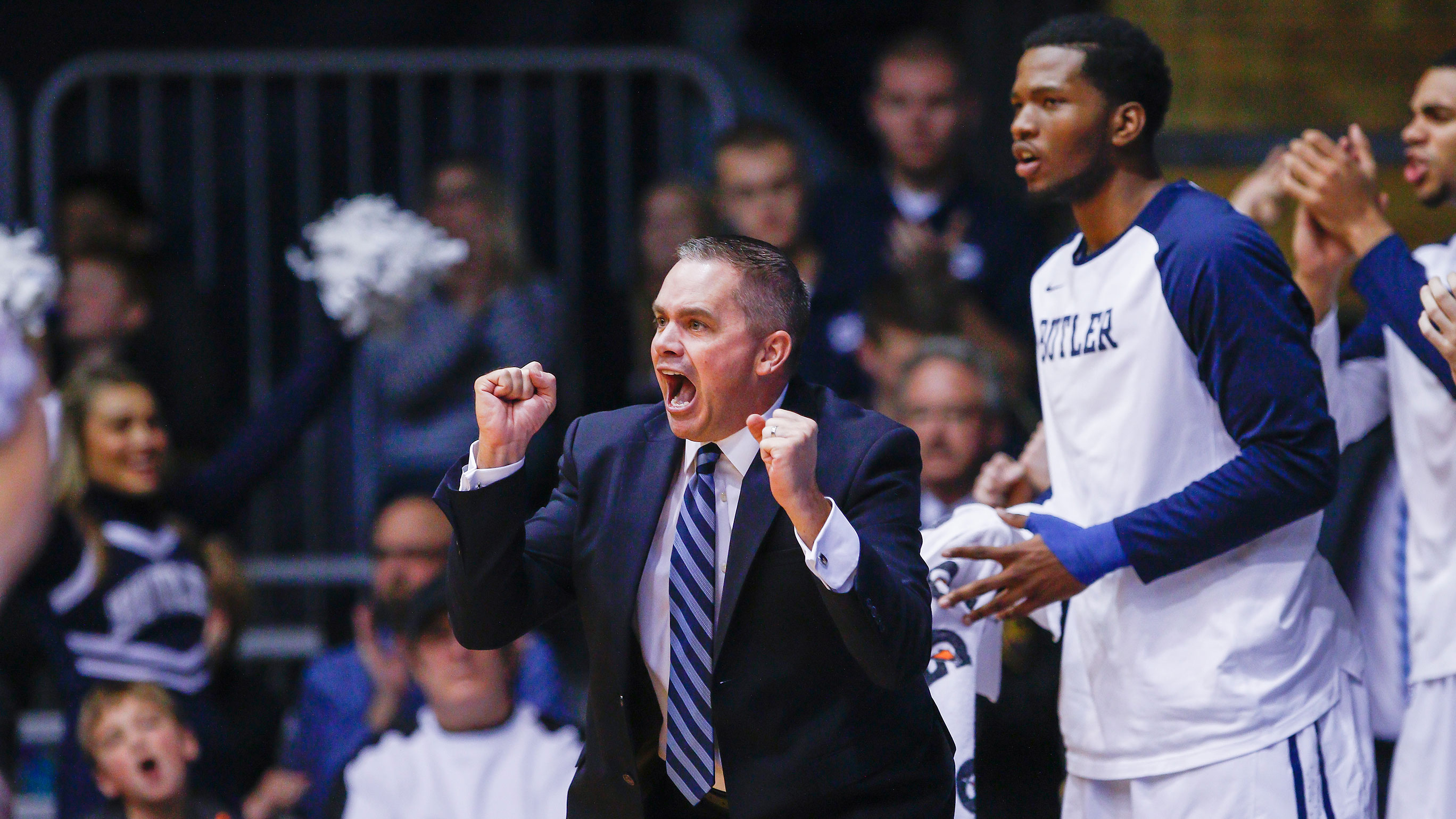 To write about Butler basketball — hell, to think about Butler basketball — without resorting to cliché is functionally impossible. Consciously or not, the Bulldogs invite it. That they suit up at Hinkle, the literal site of Norman Dale’s measuring-tape routine in Hoosiers, is just the start. There’s the puny enrollment of 4,900 and the heartland location. There’s the near-total absence of blue-chippers; since 2007, Brad Stevens’s first year, Butler has signed exactly one consensus four-star recruit (Kellen Dunham) and has never cracked the top 50 in team recruiting rankings. There’s even the Butler Way, a maxim that “demands commitment, denies selfishness, accepts reality, yet seeks improvement every day while putting the team above self.”

But for a program draped in nostalgia, Butler has undergone seismic changes in the four years since its last Final Four appearance: three different conferences (Horizon League, Atlantic 10, Big East) and three different coaches, all while facing new scrutiny generated by the program’s Cinderella runs. “When I first got to school [in 2008], we’d be in Chicago and people would ask where Butler is,” says assistant coach Emerson Kampen. “You didn’t ever go to the mall and see Butler people.” Even Indiana’s Basketball Cathedral, 87 years old and a National Historic Landmark, underwent a $36 million renovation this offseason, adding chair-back seats, a video board, and expanded locker and video rooms.

For all the upheaval since Stevens left for the Boston Celtics, this Bulldogs squad (22-9, 12-6) is back on familiar ground, like warm apple pie resting on an NCAA windowsill. Coming off the school’s second losing season in just 20 years — one that’ll be remembered for a preseason injury to Jones and a winless February — Holtmann replaced Stevens’s replacement, Brandon Miller, this past October after Miller’s unexplained medical leave. The Kentucky native added to the playbook a few zone defensive schemes that Butler had traditionally spurned, but continuity and positivity have been his priorities. During film sessions, he’s queued up footage of his guys exhibiting bad body language, a habit many of them did not realize they’d picked up. “We struggled to move on to the next play, to move on to the next team when you take a tough loss,” Barlow said. “For the most part, we’ve been able to break that habit.” Yes, they’re still analytically minded; like the wholesome math whiz before him, Holtmann speaks fluently in the language of tempo-free statistics. And yes, they still work their butts off guarding you. Through the end of regular-season play (and adjusted for opponent), Butler has allowed just 91.6 points per 100 possessions, 10th-best in the country. “I think the really cool thing,” Kampen says, “is that the tangible stuff, the stuff that really matters, is all the same.”

It’d be easy to dismiss the Butler Way as glorified Midwestern coachspeak or Protestant work ethic claptrap, but people in the locker room surely don’t. For them, playing gritty defense and limiting turnovers is a competitive strategy to execute — there are only so many ways to win consistently when you’re playing more talented teams.

Take Barlow, a 5-foot-11 point guard who enrolled at Butler in the fall of 2011, “a little pudgy” (in his words) and with ambitions to coach. He scored six total points in 16 games his freshman season before cutting back on fried foods and parking himself on the Hinkle hardwood to practice. “I didn’t just come here because I wanted to be part of a program that had been to two national championships,” he says. “I came here with the expectation that I could earn minutes.” Last year, his assist-to-turnover ratio was second-best in the league. This season, in spite of his middle infielder’s body, Barlow is averaging 8.8 points, 3.8 rebounds, 2.7 assists, and 2.1 steals per contest. He even admits that he’s “become a capable and reliable shooter when it’s needed,” which his true shooting percentage of 56.8 bears out. Now a power conference starter, he received zero Division I scholarship offers four years ago.

In college basketball, the idea of the underdog is relational: One team’s prey is another team’s predator. I asked Kampen, a former Bulldog walk-on who played on both of the school’s Final Four teams, if Butler’s players still think of themselves as the little guys. “We do embrace hunkering down together and doing tough things together,” he says after taking a few seconds to mull it over, “and finding ways to do something that people might not think we can do.” 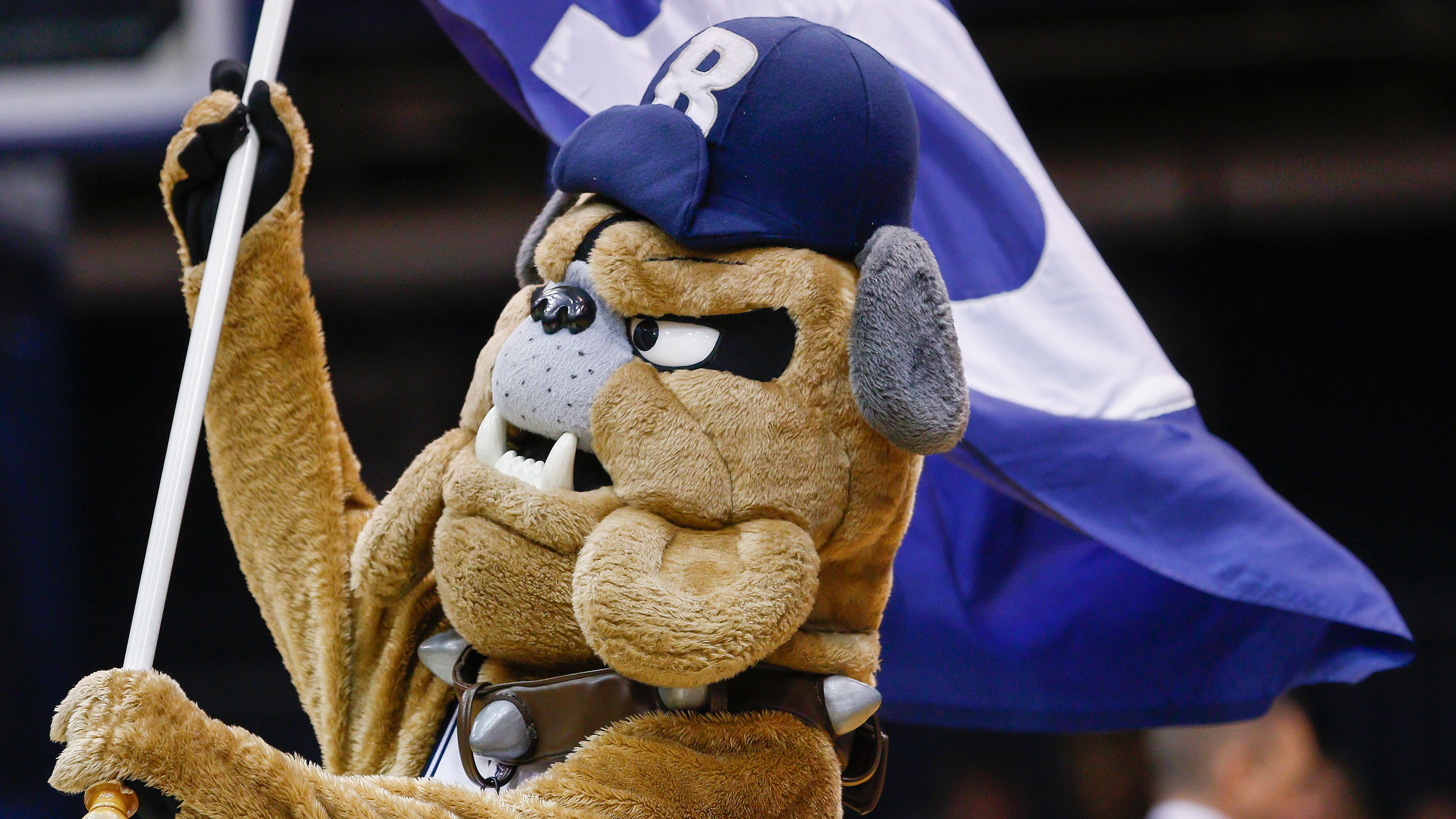 This March, few are predicting the Bulldogs to romp through postseason play. Yet it’s foolish to expect they’ll go down without a fight, regardless of their NCAA tournament seed, likely in the five range. They were picked to finish seventh in the Big East, and here they are again, third in the conference and ranked 23rd in Ken Pomeroy’s efficiency rankings (through March 12). Returning starters Kameron Woods and Dunham, a kid who looks like the wind could knock him over, have made efficient strides in the calendar year, and while Butler’s rotation is precariously thin — they rank 338th in bench minutes — Holtmann’s five starters draw fouls at a steady clip and can rebound with anybody. One could even argue that this year’s club is better than the crew that lost to Connecticut in the 2011 national title game. Its compact half-court defense is certainly stingier. “They make you grind,” says Georgetown head coach John Thompson III. “They make you focus, they make you execute, they make you work for 35 seconds.”

Holtmann, multiyear contract in hand, has quickly earned the trust of his players and staff. All he has to do now is outcoach and outrecruit the big boys, year in and year out, including that behemoth down the road in Bloomington, the school that’s casting a furtive gaze at Butler’s old coach in Boston. “It’s just a small private school — it is what it is,” says Michael Pointer, Butler’s beat reporter for the Indianapolis Star. “You’ve got to win games to get the attention.”

They’ll get another shot tonight, against Xavier in the Big East tournament quarterfinals. After that, who knows? The NCAA is holding the Final Four just six miles down the road from Hinkle this year. It wouldn’t even take that long for Trip the bulldog to scamper over.

Best Shape of His Life! Does the Oft-Mocked Spring Training Declaration Actually Forecast a Better Season?