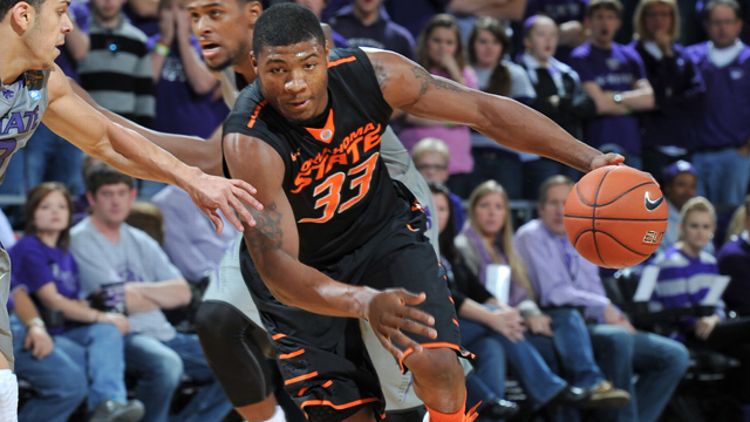 That was my favorite quote from Wednesday’s Oklahoma State press conference, in which the freshman point guard, along with teammates Markel Brown and Le’Bryan Nash, announced that he would be returning to the Cowboys next season.

Smart was laughing, and so were the undergrads at the Oklahoma State Student Union. But while the student laughter was full of joy, Smart’s contained the remnants of the grueling decision process. His announcement had stunned everyone. As Gary Parrish noted at CBS, there’s very little precedent for a consensus lottery pick turning down the NBA draft. You have to go back to Chris Marcus in 2001 and Tim Duncan in 1996 to find a real parallel; even Trey Burke last season wasn’t a projected top-10 pick. As Smart understood all too well, he was turning down millions — most experts thought he’d go in the top 3 — and removing himself from a weak 2013 draft class that only increased his stock. The situation may not be so opportune next year, and of course a bad injury could threaten his career. His choice was bold and unlikely, and nearly everybody on the college basketball scene was surprised.

But some of the reactions to Smart’s decision went beyond shock. As Eamonn Brennan pointed out, the criticism that followed had the ugly feel of paternalism, as though Smart were too simple to know what he was doing, or was ignorant of the business realities surrounding the situation. Which is why I liked the quote above — it was a definite dig at the analysts and fans who thought the stupid 19-year-old needed things explained to him, perhaps with some visual representation of what “millions” really looked like since the concept had clearly escaped him. That quote was Smart telling them, “Thanks for your concern, but I know what I’m doing.’

So why did he choose to come back? If nothing else, we can all agree that it represents an anomaly in the world of modern college basketball; something we could easily go a decade or more without seeing again.

To understand the decision, you have to understand Marcus Smart. We know from countless stories over the last year that he’s uniquely humble among big-time college athletes, and we also know he’s extremely competitive. There are infinite quotes from coaches, scouts, and teammates that let us know how advanced he is, and how he carries himself like a 10-year NBA veteran rather than a college freshman. But there’s no better source than Eric Prisbell’s acutely honest (and wonderful) feature on Smart to learn how he came by this hard-earned maturity.

Growing up in a rough neighborhood in South Dallas, Smart watched an idolized older brother’s basketball dream cut short by cancer and another brother succumb to gang life. The brother who joined the Bloods survived; the brother with cancer did not. By his own reckoning, Smart was beset by rage and became a bully. He threw rocks at passersby from his apartment complex — one of whom turned out to be a gang member who chased Smart and shot at him — he nearly broke another student’s neck, and after a group of boys jumped him he had to be restrained from going after them with his father’s .22 pistol. Anger and depression ruled his life, and after talking with his mother about all his fights, her diagnosis was that her son was “tired of living.”

But the maturity he shows now was always there in some form. There are, sadly, a lot of athletes who experience tragedy because of difficult childhoods, and not all of them become the person Marcus Smart has become. He had the inner strength to fight through the heartbreak of losing his brother, benefiting from anger-management classes and a family move to Flower Mound, a Dallas suburb. Things turned around, and the qualities that define Smart today began to emerge, while those that had threatened to ruin his life simmered at lower and lower levels in the background.

What makes Smart unique is that he can see all this in himself. It’s why the story of his redemption rings with a clarity that’s missing from the hollow PR equivalents we could find for almost any athlete with even a medium-level profile. Smart has that rarest of commodities: self-awareness. So he knows what he’s giving up. He knows he’s leaving millions on the table, for now, and that he could suffer a terrible injury and screw up his career for good.

But he also knows himself. The reason why he chose to stay is simple: He prayed, he searched his soul, and he knew he wanted to be at Oklahoma State for another year. He likes it there. It’s what he wanted. He could recognize that, and he could make a decision that went against logical business instincts. He could take a risk in order to satisfy himself. And this inner knowledge has helped him know others, too.

That kind of human intelligence is why people rave about Smart. I’m one of them — I’ve admired his play since November, and I wrote about and made videos of his feats all year, from his incredible start in Puerto Rico to his brilliance in a win over Kansas. Knowing his personal story has only deepened my appreciation for one of the best all-around players in the game, and I’m frankly ecstatic that he’ll be back next season. But it’s because I like college basketball, not because I think he made the “right” decision or that going pro is “wrong.” Ten years ago, the media at large would likely have swooned over Smart’s decision to return. His love of college, his appreciation for his own youth and amateur career, and the competitive drive that makes him want to go deeper in the tournament, would have cast him as a sort of heroic NCAA icon. But the very harsh realities of that organization have almost totally demolished the magic of the student-athlete ideal, and rightly so. Instead of receiving praise, Smart mostly has dealt with the condescending concern of the well-meaning naysayers.

But I think they’ve got it wrong. We don’t need to praise the NCAA, and we shouldn’t. We don’t need to preach about the amateur ideal, or lionize Smart as a virtuous contrast to the dirty, greedy money-grubbers who leave early. That dichotomy, and that way of thinking, is thankfully on its death bed. But we should be able to recognize the bravery in Smart’s decision. He was able to stand on his own for this decision — ignoring those who advised him, with very strong arguments, to opt for the draft — and pursue his own happiness. Whatever else we say, it does take courage to turn down that kind of money. Smart may be the only one who truly understands why it wasn’t right for him this year, but his character leaves no doubt that the understanding is complete. We don’t have to agree with the decision. Hell, we don’t even have to like it. But it would be a shame if we didn’t appreciate the singular presence of a man who knows himself.