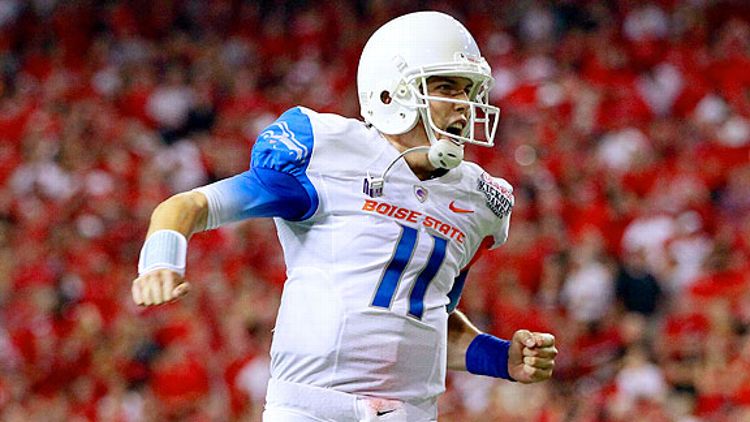 They were waiting in line to buy train tickets, a cluster of genteel souls dressed in red, wrestling with the MARTA ticket machines in Buckhead as if performing some kind of advanced calculus. They wore halter tops and cocktail dresses and golf shirts and scarlet pants patterned with little English bulldogs, and they toted leaky Styrofoam coolers overflowing with domestic beer. They filed down the stairs in a long, sloppy line that just kept growing. Chants of “Go Dawgs” echoed through the station. “If this game had been in Boise instead of Atlanta, we would have bought out their whole stadium,” one of them said. “We could sell two-hundred thousand tickets a game if they’d let us.”

They did not take their opponent seriously. Nobody ever does. Those kids on the platform who had painted up their faces in the opponent’s orange and blue color scheme … that was cute, just like that adorable blue turf deal. They snapped photos and then piled onto the train and sang their songs about drunken Georgia Bulldog fans and passed out beers to strangers. One of their own players, when asked if their opponent might belong in the Southeastern Conference, delivered a flat no, so why should they feel any different? And this player, a tailback named Richard Samuel, said that after the game, after Boise State had bullied Georgia on both lines of scrimmage in a 35-21 victory, after they’d driven those elegant hordes from the Georgia Dome and out onto the streets of Atlanta, where they stumbled off in search of a tavern and some solace.

By then, Boise State quarterback Kellen Moore had taken a knee, watched the clock run out, done his 30 seconds on national television, sidestepped a dozen photographers and a pair of humans dressed in cow costumes, and mounted a makeshift podium in his fluorescent shoes to accept a trophy shaped like a leather helmet. Such are the responsibilities of a quarterback who has just won a football game that happens to be sponsored by a prominent southern chicken restaurant (Closed on Sundays), and Moore dealt with these obligations the way his teammates say he handles pretty much everything: He smiled a lot and looked unbothered. “Maybe he got rattled on his wedding day,” a teammate said of Moore, who married over the summer. “But he’s one of the calmest guys I’ve ever known.” (Why a contest sponsored by a chicken chain whose advertising motif is centered around kindness toward bovines would dole out a cowhide prize to the winners remains a mystery.) Several interviewers asked Moore what it meant to beat an SEC team, and he politely avoided the question by never actually mentioning the name of that conference or any other.

Moore looks like the nerdy sidekick from one of those ‘80s teen-makeover movies and he does not throw very hard, but he is perhaps the most remarkable college quarterback I’ve watched in person, because he goes through stretches in which he finds open receivers on every single play. Last year, he completed more than 70 percent of his passes in 10 different games, and against Georgia he was 28-of-34 for 261 yards and three touchdowns. (He’s like Phil Simms in Super Bowl XXI, except he does it every week.) This game was a toss-up until the first drive of the second half, when Moore (whose only real mistake was a second-quarter interception) sped up the tempo so much that Georgia was forced to use a timeout on defense. And even then, the Bulldogs couldn’t stop him.

Every time you thought you knew what was coming from Boise, the Broncos would shake it up. They gave the ball to running back Doug Martin, and they ran option sets with backup quarterback Grant Hedrick, and in between, Moore picked apart the Georgia secondary with slants, curls, and outs, all amid the seams of the zone. Nine different players caught passes, thereby negating the argument that Boise would struggle against an SEC secondary because its two best receivers had graduated. Martin carried 24 times for 57 yards, thereby negating the argument that Boise could not pound the ball against an SEC defensive line. Georgia quarterback Aaron Murray was sacked six times, thereby negating the argument that Boise could not sustain an attack against an SEC offensive line. A couple of times, Moore would bait the Georgia defensive line, allow it to penetrate, and then float a little balloon over its head, as he did in the third quarter on a touchdown pass to Tyler Shoemaker that made it 28-7 and drained most of the air from the building.

So often these past few years it seems that the paradigm is on the verge of shifting, that Boise State might finally become an accepted member of the college football power structure. But it never really happens. In Chris Petersen’s past five seasons as coach, the Broncos have gone 62-5. They’ve won their past five games over teams from BCS conferences, including this one, which was essentially a road game against an SEC squad with high preseason expectations. And yet there are millions who still view Boise as nothing more than a pest, an annoyance that will not abate no matter how much flypaper hangs from the ceiling. This is not like South Florida going all-in to join a power conference and purchase a program; this is an upstart school from Idaho with a stadium that holds 33,500 people. There may have been that many Georgia fans outside the dome searching for scalped tickets Saturday night.

This is the Boise conundrum: Whatever they do, it will never be enough, because whatever they do calls into question the power structure of college football. Even the teams they throttle don’t take them seriously. “We worry about the things we can control,” wide receiver Mitch Burroughs told me afterward. I could tell he was trying damned hard to convince me, but I didn’t believe him at all.

Of course, everything they say about the SEC is true. It is the most competitive college football collective in the country, and the most passionate, and its air of superiority is largely deserved. When a cornerback named Brandon Boykin carried the ball for the first time in his career, broke loose into the secondary, and outran everyone to the end zone for the first touchdown of the game, everyone in the Georgia Dome thought: SEC Speed. Even as the Dawgs were faltering in the second half, LSU was busy dismantling the fast-twitch mythology Oregon had built up around itself.

And so people will make the same excuses for this Boise victory that they’ve made for all the others that have come in the past over Oklahoma and Oregon and Virginia Tech and Oregon State. They will say Georgia has become a weak sister under Mark Richt, that Boise could not win week after week in the SEC, that someone would expose it for its dearth of athleticism, that this whole Boise run under Petersen is nothing more than a series of parlor tricks. And maybe they’re right. It’s only the first week of the season, and no sport evolves more from week to week than college football, which means Georgia could drop South Carolina next week and Boise could struggle with Toledo in two weeks and no one would be shocked. But I don’t think that will happen to Boise. I don’t think that will happen because (a) this may be the best Boise team yet, and (b) the Broncos recognize that they have absolutely no room for error.

Last year, they lost to a good Nevada team on a pair of blown field goals and immediately dropped out of the Bowl Championship Series picture. This is Moore’s senior season. They might never find another quarterback quite like him.

After this game was over, one of Moore’s teammates hugged him and said, “That’s a nice start.” There is a sense of urgency about this season, because who knows where the Broncos fit into the bigger picture from here on out? Last season, Boise jumped from the Western Athletic Conference to the Mountain West largely for the prospect of facing TCU, and then TCU announced it was bolting for the Big East next season. Amid all this talk of superconferences (and potential playoffs structured around superconferences) no one has really mentioned Boise, except as a possible consolation prize for the Big 12 if the Big 12 doesn’t spill its guts out to the Pac-12. So who knows? The fun could end at any time. Maybe Joe Paterno will retire and Penn State will make Petersen an offer he can’t refuse. It wouldn’t be such a stretch to compare the two programs: Back in the late ‘60s and early ‘70s, back when Paterno was annoying the crap out of southern schools with his notions of a Grand Experiment, the Nittany Lions went undefeated three times and were never seriously considered national championship material. Nobody believed an upright eastern school could be that good; nobody thought a team from that region could possibly sustain itself against the big boys. It took more than a decade, but on New Year’s Day 1983, Penn State won the national championship in the Sugar Bowl, against a team with a Heisman Trophy winner in the backfield.

Herschel Walker was largely ineffective for Georgia that night; on Saturday in Atlanta, a sports car cruised onto the field during pregame and Walker stepped out of the back seat to a thunderous ovation. It was one of the most raucous moments of the evening for Georgia fans, who by the third quarter were booing their own offense. By the time Moore hoisted that leather helmet over his shoulders toward the contingent of Boise fans crowded in the corner of the Georgia Dome, the Bulldog faithful had bolted for the exits, a red sea of the drunken and disappointed crowding the MARTA platform. “I wish you could have met a Boise fan,” one of them was saying. “I met a Boise fan, and they’re really nice.”

The doors opened and closed. Somebody let out a hiccup.

“But, you know, everybody in the whole country was rooting for us,” he went on. “Because those guys … they’re just so annoying.”