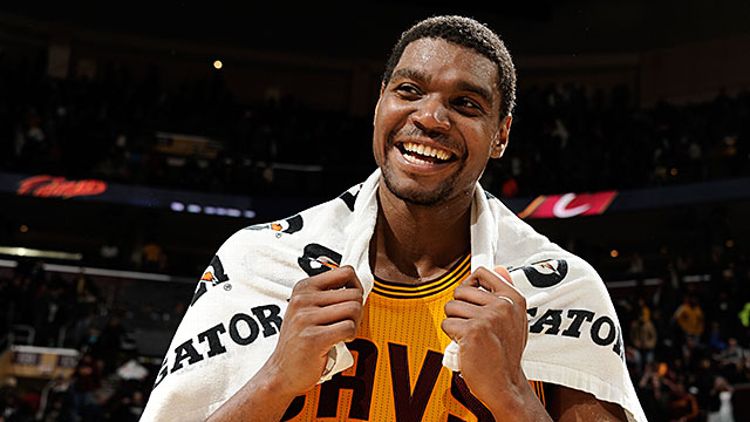 There’s a decent chance that, unless you’re a fan of a specific team, you’ve been ignoring Eastern Conference basketball not involving Miami or Indiana. If this is the case, here’s what you’ve missed: Three teams in the East have winning records and the Atlantic Division looks like the mouth of a meth addict. In the land of the blind, the man with the glass eye can’t see shit, but makes the playoffs anyway. Hope and good news do not exist here. Not that long ago, the best story to emanate from the disappointing Cleveland Cavaliers was the revelation that Dion Waiters didn’t punch Kyrie Irving in the face. The best story, that is, until Andrew Bynum started to release the doves.

Coming into last night’s game against New York, Andrew Bynum was averaging 18 points, nine rebounds, and two blocks in 25 minutes over the previous four games. Bynum’s best game in that stretch was November 30 against the Bulls: 20 points, 10 rebounds, five blocks, 8-for-14 from the floor in an unthinkable-only-last-season 30 minutes. He scored in a variety of ways: power dunk off the catch, dive off the pick-and-roll, baseline spin reverse layup, left-block turnaround off glass. On defense he was just as active, sealing off the strong side, clogging up the paint, and protecting the rim, at one point throwing back two Joakim Noah shot attempts in the space of about three seconds. Two games later against Atlanta, Bynum tried to wave off Anderson Varejao after Mike Brown sent Varejao in for him. This is the same Bynum who, only a month ago, described himself as “a shell” who only wanted to “find the joy again,” and talked about retiring as if it were a thing he might do when he got back from the bathroom, like some beaten-down Willy Loman. Attempting to call off a substitution isn’t exactly a return to his 3-point-shooting Lakers salad days, but it is a notable display of confidence from a player who lost an entire season after his knee buckled while trying to pick up a 7-10 split.

Maybe the worst thing about the East this year is the way the concentrated awfulness of the basketball serves to highlight the pointlessness of the entire exercise. The raison d’être of the NBA season is the title, and only a handful of teams are capable of winning that title in any given year, thus the greatest trick the league has ever pulled is giving the fans of the other 26 teams a reason to care every year between October and May. The de facto dissolution of the divisional system undermines this fundamental illusion. The Eastern Conference playoffs — barring catastrophic injury or alien invasion — will be Miami and Indiana versus a collection of dented soup cans. No dark horses, no puncher’s chances, just death and taxes. For fans of the soup cans, wringing any joy out of their teams this year involves a certain flexibility of mind. That means shrinking down the sample to a good game, good quarter, good sequence; focusing on individual players developing, rediscovering, or rehabilitating their games; and, if all else fails, shrugging and hoping to hit oil in the draft (except you, New York and Brooklyn).

The Cavaliers are 5-4 when Andrew Bynum plays 20 minutes or more; 2-6 when he plays less than 20 minutes. He has played in all 82 regular-season games exactly once in seven career seasons, and he missed all of last year, collecting only his paychecks and the eternal enmity of the city of Philadelphia. Ignore the injury-history guillotine; four solid games in a row from Andrew Bynum is a small sample that Cavaliers fans should find worth watching.