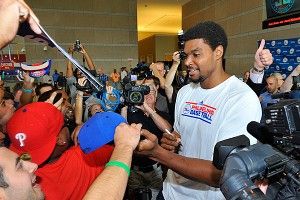 Philadelphia sports fans are regarded as a nasty bunch — jeerers of Santa Claus, cheerers of paralysis, heavers of battery acid at toddlers — but the only venom produced this week was a half-hearted “Beat L.A.” chant. Instead, Wednesday’s press conference introducing Andrew Bynum as a member of the Sixers was an adorable congregation of the optimistic. To giddy hooting, the new centerpiece of the franchise declared affection for the city, rattled off native credos, and coyly alluded to sticking around for longer than the final year of his contract. Damn that flirtatious, Shrek-size rogue. Meanwhile, GM Rod Thorn, for whom the acquisition of Bynum represents an opportunity to leave a legacy in Philly, looked like a proud grandfather at a wedding reception after too many toasts.

While the Sixers ended 2012 with a respectable Game 7 loss to the Boston Celtics in the Eastern Conference semis, the dismantling of last year’s team has been received with jubilation. As a reward for helping the Los Angeles Lakers shanghai yet another dominant big man, the Sixers landed one of their own. A seven-year veteran at only 24 years old, Bynum is the most enticing of NBA commodities: a young redwood who still is craning toward the sky (for perspective, Portland’s 2012 lottery pick, Damian Lillard, is 22). He single-handedly solves immediate needs in post scoring, offensive rebounding, shot blocking, and earning trips to the foul line.

But for Philadelphia, Bynum represents even more than 20 points and 12 rebounds a game. His arrival brings to an end an era of bland irrelevance where mediocrity was celebrated as overachievement.

From Chamberlain to Malone to Erving to Barkley to Iverson, the Sixers have been an organization bestowed with iconic superstars. But since late 2006, the franchise has been faceless.

Andre Iguodala was an excellent player for Philadelphia — he’s a Doberman on defense and a thrilling finisher in transition — but was never sniffing that pantheon. For the most part, he was connective wiring that spanned from the Iverson era to whatever came next (the Elton Brand dynasty, maybe?). Over the past two seasons, the front man for the franchise was not Iguodala but Doug Collins, a 61-year-old coach with a reputation as basketball’s chiding schoolmarm. Not the first person you’d choose for a sneaker campaign with Mars Blackmon.

In an NBA universe where stars align in major markets, the Sixers spent the past six years slumming it. Similar to trust-fund kids with greasy hair who shoot pool at stabby biker bars, they’ve been masquerading as an underprivileged, loser franchise like the Sacramento Kings or Milwaukee Bucks. But Philadelphia is a top-five media market whose peers are New York, Chicago, Los Angeles, and Dallas. The Phillies and Eagles haven’t been acting like small-town yokels, content to blink into the distant big-city lights. They’ve been slinging contracts to guys like Cliff Lee and Michael Vick. While Dan Gilbert composes angry letters about the NBA’s lack of parity in Comic Sans font, the Sixers should be ruthlessly hoarding talent and smoking fat cigars. With Bynum, Philly hasn’t completely returned to blue-blood status, but they’ve shorn off the shaggy mane and moved into the guesthouse in Monticello.

Oddly, before last week, the Sixers’ offseason was a directionless mess. New ownership promised bold moves, but most activity involved adding small forwards (they drafted Mo Harkless, signed Nick Young, and traded for Dorell Wright). While such an obsession with wingmen is usually reserved for beer commercials, the team’s prospective frontline of Ayn Rand apostle Spencer Hawes and pastry-tossing Kwame Brown was the source of fevered night sweats.

When the Sixers’ offseason moves are viewed in composite, they’ve not only changed in personnel, but in personality. With Iguodala now in Denver, Elton Brand in Dallas, and Lou Williams in Atlanta, the core of a team that visited the playoffs four times in five years was mercifully yanked out. It wasn’t a compelling ensemble. As if haunted by the YouTube-able specter of Iverson’s “practice” press conference, adjectives used to describe the Sixers’ recent identity usually included “overachieving,” “hardworking,” and “anonymous.”

The influx of new players includes Bynum, a mercurial talent with moments of pouting and goonish brutality; Nick Young, a man known as Swagy P who wears Technicolor Dream Shirts; and Jason Richardson, a flashy dunker who bounced the ball off Carlos Boozer’s noggin in the Rookie-Sophomore game. Not to say these guys aren’t gentlemen and solid citizens, but they aren’t the bloodless bots we’ve grown accustomed to watching in Philly. There was no Swagy P before.

Besides an attitude adjustment, Bynum’s arrival offers salvation from a half decade that was consumed by fretting about the development of players who aren’t worth losing sleep over. Jrue Holiday is rangy and fluid, a promising point guard who likely will never be among the top 10 at his position. Evan Turner has escaped the bust label, but still can’t shoot. Assuming Bynum stays both healthy and in Philly, the Sixers can operate with the knowledge that most of these guys are totally replaceable.

But with new ambition come new concerns. For a team with a .500 record, inking Thad Young to a five-year, $42 million contract (which Philly did before last season) could be the difference between grabbing an 8-seed and being in the lottery. Now, it could prevent them from scooping up Chris Paul and attempting to dethrone the Miami Heat. Almost every team has misspent salary, but the Sixers are paying Hawes, Brown, Young, and Lavoy Allen in the vicinity of $21 million for at least the next two seasons. Add in Jason Richardson’s contract and Holiday’s impending extension, and the Sixers are tip-toeing toward the salary cap tar pit even before adding another elite player. Can you beat the Lakers, Thunder, or Heat like that?

Overnight, the acquisition of Bynum turns the Sixers into a legitimate rising power in the Eastern Conference. They have a bruising young bulwark to build around, an upper-echelon talent who can draw other superstars into the fold. But along with greater expectations come greater opportunities for disappointment — and for Sixers fans, surliness is always just a few losses away.