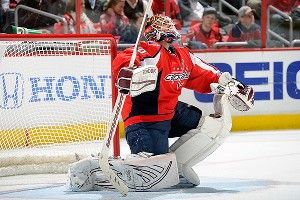 This week got off to quite a start for 22-year-old Washington Capitals goaltending prospect Braden Holtby. After making 34 saves for the AHL’s Hershey Bears on Sunday in their 5-1 win over Wilkes-Barre Scranton, Holtby woke up Monday morning to find out that he was being summoned to Washington, presumably because the Caps no. 1 goalie Tomas Vokoun had the flu and they needed someone to back up Michal Neuvirth. Instead, when Holtby arrived around 2 p.m., he found out he was starting that night.

As the days tick down until the NHL trade deadline, these sorts of things can happen. Perhaps this was a showcase game for Holtby to let scouts take a look, or maybe the Caps organization wanted to see how they’d fare if they dealt another netminder and ended up having to use more of Holtby going forward.

Whatever it was, it did not end well: Holtby was in net for a 5-3 loss against the San Jose Sharks, a game in which the reality was somehow actually worse than the score. He bobbled a routine grab on a shot from beyond center ice, and he watched as a puck rolled up his arm, down his back, and into the goalmouth behind him. Tuesday morning he was sent back up to Hershey, back down to the AHL.

Holtby’s 24-hour stint clearly didn’t go the way anyone had hoped. Still, looking at the way the Caps yanked him up and into the starting role, I worried less about him and more about Michal Neuvirth, whose own day didn’t go all that well, either.

Caps coach Dale Hunter said that his decision to start Holtby was a function of not wanting Neuvirth to play back-to-back games (he had played against the Rangers on Sunday) and a general reward for a job well done in the AHL. But Holtby himself had also played Sunday, and it seemed like an odd time to be giving out pats on the head — the Capitals are fighting for a playoff berth these days. Making matters weirder? Hunter spent much of Monday denying that anyone was getting called up from the AHL.

Even Neuvirth assumed he was starting for most of the day Monday, and prepared accordingly. (He would find out about Holtby only when he got to the rink for the game.) When asked about the swap, Hunter didn’t mince words: “It’s one of those things where if [Neuvirth] was standing on his head every night, would Braden be playing?” Hunter said. “No. So it’s always judged by how you play.”

The 23-year old Neuvirth (who has given up some doozies himself this season) seemed as frustrated that nobody bothered to communicate with him as he was upset that he didn’t get to play, calling the whole thing “tough to swallow.”

The Capitals play the Panthers on Friday in a game with major playoff implications, as Florida currently leads the Southeast Division by four points over Washington. It’s likely that Vokoun will be back in net and things will settle back down to whatever passes for normal in the Capitals organization these days. Still, it’s hard to shake the odd treatment of Neuvirth — so publicly cold! — or the bizarre tour of duty assigned (granted?) to Holtby. It’s been a strange few days for us all.

In other news in net …

The Phoenix Coyotes’ Mike Smith was named the NHL’s First Star of the Week on Monday for posting four wins in four starts, including a 3-0 blanking of Chicago last Saturday. Smith picked up another big shutout Thursday night, as the Coyotes beat the L.A. Kings, 1-0. Smith’s work included this save:

Like Darryl Sutter, San Jose Sharks coach Todd McLellan was blunt about the play of his goaltender. After the Sharks lost a 6-5 game in overtime to the Tampa Bay Lightning on Thursday, McLellan called the team’s net play “just atrocious — starting with the goaltender and then the defenseman and the forwards,” according to the Mercury News’ David Pollak. Regarding Antti Niemi, McLellan said: “He wasn’t any good. I protect him a lot and I talk about the team, but he has to be better. He flat out has to be better.”

Niemi wasn’t the only goalie who had a tough night Thursday. The New York Rangers’ Marty Biron, who had a 10-2-1 record this season going into Thursday’s game against the slumping Chicago Blackhawks, emerged from the contest with his third loss of the season after giving up four goals in the first half of the first period. (In his defense, the first was on a penalty shot, while the second was on a breakaway.) Of the penalty shot, which Jonathan Toews converted just a minute in by going five-hole, Biron said: “It’s one of those situations where you have a chance to give your team some momentum. I didn’t come up with it … I’m taking this one.” Starter Henrik Lundqvist, who earned his league-leading seventh shutout of the season on Tuesday in Boston, will be back in net when the Rangers play the Blue Jackets on Sunday.

Jaroslav Halak earned a 25-save shutout against the San Jose Sharks on Sunday, though he was in net for a 2-1 loss to the Blue Jackets on Tuesday … As the Anaheim Ducks try to make an unlikely push for a playoff position, Jonas Hiller has been reliable in goal, going 5-1-2 in the month of February … the Detroit Red Wings’ Jimmy Howard, who has been out with a broken finger, will likely return on Sunday. In his absence, backup Ty Conklin struggled and was ultimately replaced with Joey MacDonald, who has won his last four starts.

Since this has been, overall, a sorta tough week for goalies, it’s only fitting that we end with a video not of a save, but of a goal. Sorry, Miikka Kiprusoff, but for the time being, you’re going to have to play the role of The Other Guy in this Mike Ribeiro overtime score that inspired TV commentator Razor Reaugh to use the phrases “six shades of sexy,” “pull its pants down and spank it home,” and “here comes the stimulation.” Consider this your inspiration for a good Friday night.