A Quick Word About the Klose Constant 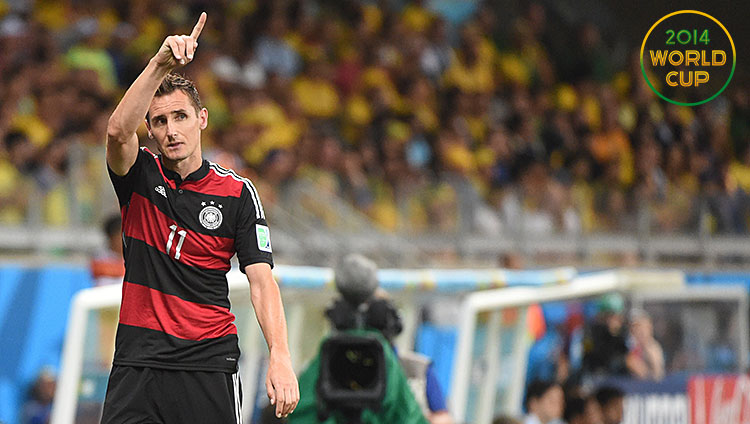 If you think about soccer too often, and if you do it with the right stereotypes in your head — brutally efficient Germans; playful, unorganized Brazilians — yesterday’s game could’ve conceivably been a dream you had. Thankfully, though, Miroslav Klose was there, scoring goals at the World Cup, reminding us that the world’s still spinning, and yes, holy shit, this is really happening.

I’m tempted to say that Klose’s goal — an afterthought in a mind-numbing rout, surpassing Ronaldo in Brazil — was “fitting,” but at this point it’s simply fitting that a World Cup game was played in which Klose scored a goal. That’s 16 goals in 23 World Cup games over the past 12 years, and that’s Klose — as soon as FIFA updates it — one spot higher on the all-time list than the dude who did this:

As a counterpoint, Klose described this as “a nice goal”:

It’s probably foolish to compare the two — Ronaldo might’ve been the most unfair combination of physicality and skill the sport’s ever seen; Klose shocked viewers each time he didn’t throw out his back doing a front flip; Ronaldo scored a ton of goals over a short period of time; Klose scored a ton of goals over a long period of time — but it’s also fascinating how differently they each went about doing the same thing. What’s more: Klose, only one year older than Il Fenomeno, is still doing it.

Since 2002, Germany’s transformed from, roughly, a bunch of big dudes and Michael Ballack to, thanks to nationwide development standards, a Restoration Hardware catalog of the world’s most technical midfielders. Besides the colors of the flag, the one constant — despite manager Joachim Löw’s brief flirtation with the performance-art piece No Striker for a few games this tournament — has been Miroslav Klose. It’s really hard to score goals, and it’s even harder to do it as consistently and unspectacularly as Klose has for more than a decade.

All Miroslav Klose's WC-record 16 goals were from inside the box, from avg of 8 yards: pic.twitter.com/gnADXoqdtr

Barring something unforeseen, Klose will start in the final on Sunday. It’ll almost certainly be his last World Cup game, and it might even be his last game in a German shirt. Considering the basics — a soccer game, being played at the World Cup — it’ll be an oddity if he doesn’t find the net. Klose is still yet to score in the final, though, so it’ll be fitting if he does. Then again, it always is.

About Last Night: Battle of the Bay