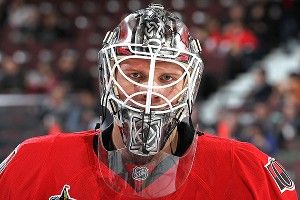 The Ottawa Senators reserve goaltender Robin Lehner sure picked a good time for his first career shutout: two days after the Senators traded for St. Louis’s highly touted netminder Ben Bishop. A little competition never hurt anyone! The trade took place after Senators starting goalie Craig Anderson sliced his finger badly enough to preclude him from playing; Lehner was also called up from the AHL’s Binghamton that day and made 28 saves in a 5-2 victory over the Islanders.

It was on Tuesday, though, that the fiery 20-year-old — who became the youngest Swedish goalie to play in the NHL last season when he debuted just two months after turning 19 — really made his mark. Lehner stopped all 32 shots that came his way for the 1-0 shutout victory in Boston, where he was named the game’s first star. (Bishop, who was assigned to Binghamton, picked up first-star honors for the AHL affiliate the same night.)

It will be interesting to see what unfolds between Lehner and Bishop. Last season, Lehner helped lead the Binghamton Senators to the AHL’s Calder Cup and was named MVP of the playoffs; this year, Bishop has been the AHL’s top regular-season netminder for the Peoria Rivermen and was even named the MVP of the All-Star Game.

Despite his big recent games in Ottawa, Lehner has been less than impressive in Binghamton this season, sporting a 8-16-1 record as well as a three-game suspension for … well, just watch:

The Senators blog Silver Seven suggests that Lehner — whose father was one of Henrik Lundqvist’s coaches back in Sweden — has a problem approaching everyday games with the same rigor and skill that he demonstrates in big moments. “Championships are won by goaltenders who can raise their game at the right time, and Lehner has shown the capability of doing so,” Peter Raaymakers wrote. “But in order to get to the right time, your goaltender needs to find a way to motivate himself during the doldrums of the regular season.”

Maybe that explains the next-level appearance. After all, what better way to motivate someone like that than to trade for someone like Bishop? And so the Senators, who stand at sixth place in the Eastern Conference and are just three points back of Boston for the top spot in the Northeast Division, suddenly find themselves with the good kind of goalie situation on their hands.

In other news around the league’s nets: