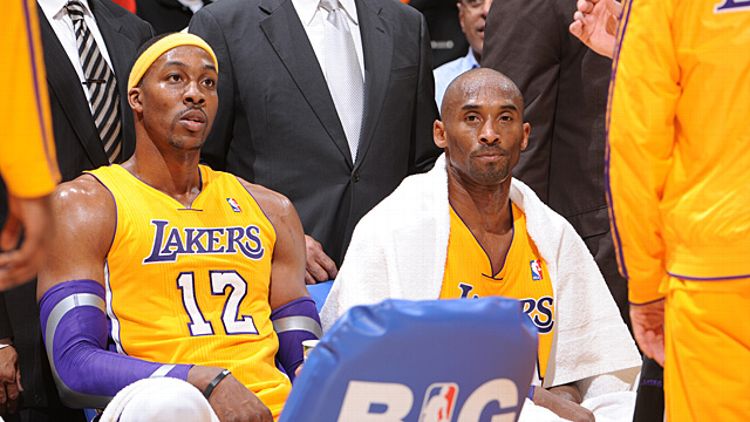 Let’s not mince words here — the Lakers are boring. Sure, they’re a flaming train wreck from which we can’t avert our eyes, but their actual on-court product (and even some of the drama off it) is far from enjoyable, in the traditional sense. If you stripped away the star power and franchise mystique, all you’d be left with is a basketball team that’s losing far more than it wins, and there’s not much fun about that. (Again, in the traditional sense.)

But given there isn’t any way to not talk about the Lakers, I went to the ESPN Trade Machine (at least in part) and tried to figure out a deal that, in an alternate reality, would make the team more palatable. The trade I came up with is both realistic (based on some real rumors I’ve heard/read and players’ fair market value in mind) and totally effing bananas (five-team, 15-player trades and unicorns tend have a lot in common). I’d still like to think at least some parts dabble in the vicinity of the plausible.

In the end, I came up with a Lakers team (as well as a Cleveland one) that I would actually enjoy watching on a nightly basis. Of course, it’s built along the lines of my own personal views — fit over star power and great offense over any type of defense — but I think it would make the struggling L.A. team, as well as a couple of the others involved, more interesting.

Either way, there’s enough in there to get people yelling at each other (or at me), which is easily the best part of fake trades anyway. So here ya go:

Why they would do it
It’s easy to see now that the Dwight Howard–Pau Gasol frontcourt tandem in L.A. simply isn’t working. It’s been thought that if one were to go, it’d be the 32-year-old Gasol, but it might actually be in the Lakers’ best interests to part ways with Howard instead. Not only could the younger Howard still fetch far more in return, but both his behavior and lingering back issues cast doubt on his long-term fit in the organization. There’s also the chance that this whole catastrophe could cause Howard to walk at season’s end, leaving L.A. with nothing in return.

It’s also not as if being left with Gasol is some horrible consolation prize. Not only is he the better teammate and professional, but his skills — and willingness to play to them — are a better fit for Mike D’Antoni’s offensive system. There’s also something to be said for workplace happiness and chemistry, and that might be part of the reason that the team’s offensive efficiency is more than 2.5 points better with Gasol as the lone big man on the floor.

What it does
The addition of Jared Dudley — a high-energy, low-usage shooter (40 percent career mark from behind the arc) and ball mover — is perhaps the key to the entire deal. Too often, players are judged by what they choose to do on the court, and not by what they choose not to do. Dudley is the rare player that seldom attempts anything that isn’t a strength of his game. That type of discipline, combined with outstanding perimeter shooting, will give the Lakers’ three aging stars the possessions and space to further showcase their skills.

Metta World Peace is basically the anti-Dudley, and this deal would allow Mike D’Antoni to move the burly forward back to the bench as the team’s sixth man — a more fitting role considering his shot-happy ways. By embracing his job as a versatile combo forward, World Peace can be both a traditional 3 off the bench and a stretch 4 that finishes games with the starters. The latter is a role that makes him far more dangerous — according to 82games.com, World Peace has a 21.7 PER while manning that position.

Mirza Teletovic’s presence, along with World Peace and the emerging Earl Clark, would give the Lakers an interesting trio of options at the 4. D’Antoni could either choose the pure shooter (Teletovic), the two-way vet (World Peace), or the versatile athlete (Clark).

Kendall Marshall and John Henson, despite Henson’s recent stellar play of late for Milwaukee, are strictly assets for the future. Henson provides a cheap replacement for free-agent-to-be Clark, whose recent run suggests L.A. won’t likely be able to retain his services at a reasonable (read: low) cost next season. Marshall, a young, pass-first point guard, would be the latest in a long line of understudies to replace Nash.

The bottom line is this deal makes the Lakers much more suited to D’Antoni’s preferred style. L.A. already posts an offensive efficiency rating of 110.7 with just Gasol on the floor. Add Dudley, and that number likely jumps even higher. Better still, if the team paired Dudley and World Peace in the frontcourt next to Gasol, D’Antoni could find himself flirting with the same type of offensive efficiency he had in Phoenix.

The other end of the floor would obviously still be a problem, but a mixture of zone and personnel changes could give them an outside shot of being in the top 15 by year’s end. With fantastic offense and marginal defense, the Lakers would somewhat mirror the 2011 Mavericks — a team that won a title with that same recipe. I’m not saying this trade would make L.A. title contenders, but the new approach would certainly make them more interesting — and dangerous — than their current version.

Why they would do it
After spending an offseason pursuing him, Mikhail Prokhorov would finally bring Dwight Howard to Brooklyn while cleverly getting out from under Gerald Wallace’s contract.

What it does
No matter how much Brook Lopez improves, he’s still no match for a healthy Howard. Assuming Howard returns to his dominant, pre-injury self, acquiring the temperamental big man via trade and re-signing him after this season raises the Nets’ ceiling considerably. Given the steady play of veterans Jerry Stackhouse and Keith Bogans, losing Wallace doesn’t hurt nearly as much as anyone would’ve expected before the season. Bogans, in particular, has been lights-out when paired with the starting unit and provides a poor 3-point shooting team with valuable floor spacing.

Moving Wallace’s contract also lessens the luxury-tax burden the Nets will face going forward. Even if Howard should choose to leave, getting Wallace off the books could potentially open up enough cap room in the summer of 2014 for the team to make a run at an impact (but not max-level) free agent.

Where problems will arise is if Bogans and/or Stackhouse miss extended time with injuries, especially in the playoffs. That would mean that Wes Johnson — included in the deal for his expiring contract rather than his play — would be called upon to play meaningful minutes. But again, if Brooklyn is the place where Howard becomes the Howard of old, iffy production from backup wings will hardly matter.

Why they would do it
The Suns are a directionless franchise suddenly presented with the opportunity to acquire a young center with the potential to be a franchise cornerstone (Lopez). And thanks to their elite training staff, Phoenix has a greater chance than any other team in the league to get fair value from the remaining years of Wallace’s contract.

What it would do
The Suns would have a solid Goran Dragic–Wallace-Lopez core with enough cap flexibility to pursue one more big-money player. That seems like a much better option than the current “surround Dragic with a bunch of middling veterans” approach the team has now.

Why they would do it
The Bucks’ management seems to be hell-bent on an extended run of mediocrity, and adding a solid veteran 5-man like Marcin Gortat at the cost of a young prospect and an expiring contract seems to fit right in with that mission statement. The Polish center makes them better at a position of need immediately and guarantees a berth in the playoffs this season.

What it does
Larry Sanders has emerged as a shot-swatting force, but his long, thin frame raises questions about his frontcourt position. He should be able to fit in seamlessly alongside Gortat and provide a nice pairing of bulk and athleticism on the defensive end of the floor. Ersan Ilyasova could slide back to the bench, and new coach Jim Boylan could rotate the trio in the same fashion Monty Williams handles his Robin Lopez–Anthony Davis–Ryan Anderson frontcourt down in New Orleans.

Why they would do it
MarShon Brooks and an affordable stretch big for an expiring contract? Yes, please.

What it does
The impact of the trade this year will be minimal, as Cleveland will still be on the wrong end of quite a few lopsided scores. Next year, however, assuming both Channing Frye and Anderson Varejao return to full health, the Cavs would be a serious a playoff contender. Frye’s shooting prowess could make life on the court substantially easier for a glut of talented, young guards going forward, and if Cleveland’s lottery pick could be used to deal for a veteran wing, the wins could start coming quickly in Cleveland.