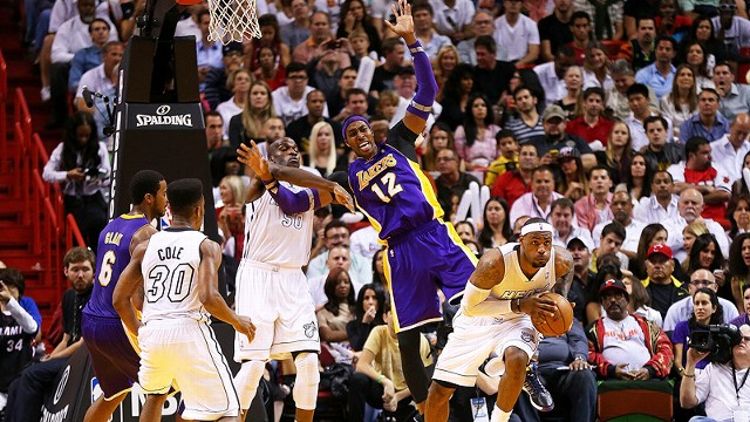 At the end of the 2010-11 season, LeBron James and Dwight Howard were the two best players in the NBA. James was the clear top dog, and it wasn’t all that close, but Howard had established himself as a legitimate MVP candidate and a monstrous two-way force with an increasingly polished post game. Howard was still very good last season, though not quite as dominant on defense, and the embarrassing way he handled his on-again, off-again, on-again departure from Orlando infected the Magic locker room and ultimately doomed a very good team. Then Howard suffered a back injury and semi-engineered a monster four-team trade that sent him to Los Angeles, where he would team with three future Hall of Famers to theoretically form a juggernaut.

That, of course, has not happened. Howard remains an efficient offensive player, though one that is a bit lost in the Lakers’ ever-changing offensive “system.” He has been listless, complaining about touches and expressing a desire to work as an old-school post-up beast rather than the Tyson Chandler–style pick-and-roll force he was for much of his tenure under Stan Van Gundy in Orlando. And he has been a shell of himself defensively, unable to blow up opposing pick-and-rolls or muster two hard cuts/jumps on the same possession.

That 2010-11 season ended with the greatest humiliation of James’s career. He melted down in the Finals, delighting fans who wished for his failure and raising serious questions about how he would respond.

Not even two years have passed since that Dallas championship, but it somehow seems so long ago that, at the time, James-Howard looked as if it might be the No. 1-vs. No. 2 rivalry that would determine several NBA championships going forward. Kevin Durant has left Howard in the dust in the race for that No. 2 slot behind LeBron, and Howard’s effort this season has put the debate over his place in the league on hold as the NBA tries to figure him out — physically and mentally — again. James, meanwhile, has gone berserk. His PER is over the historic 30.0 marker for the second straight season. He’s shooting an unthinkable 56 percent, including 42 percent from deep on a healthy number of attempts. He’s a fantastic rebounder, and a terror on defense when he’s motivated, capable of guarding every position and flying all over the place within Miami’s controlled chaos scheme. He’s playing at a level that few players, if any, have ever reached. Howard, meanwhile, is a temporary punchline whose father speaks up for him in the press.

All of this crystallized in one moment during Miami’s emphatic win over the Lakers on Sunday. (And forgive me if someone has already highlighted this play; I was traveling for much of Sunday and Monday, and I’m a bit behind in my reading). It was an inconsequential thing in the scheme of the game, since neither star recorded a statistic on the play, and it resulted in a run-of-the-mill defensive rebound for Miami. But it made me leap from my couch when I was watching. Focus on the left block as Earl Clark attempts his jumper, and just watch what James does to Howard:

It’s normally silly to attach much symbolic importance to any one thing among the hundreds that happen in an NBA game, but it’s irresistible here. Dwight Howard, once the league’s greatest defender and rebounder, wants absolutely no part of the fight LeBron James takes to him. Howard hopes to earn the rebound by simply planting himself below the hoop under the assumption that this alone will be enough. James darts right around him for inside position, and he doesn’t stop once there. He rams his back into Howard’s chest, uprooting the man whose official Web site once boasted “resembles a 6-11 bronze statue of Apollo,” and follows it up with two hard elbows to Howard’s chest. And Howard just accepts all of this before meekly retreating on defense.

Howard’s duty here is to get back on defense once he realizes the odds of an offensive rebound are against him, so some of his submission is justifiable under normal NBA strategy. And Howard has a painful shoulder injury on top of his recovery from back surgery. But it’s hard to watch this and not think about how one player has emerged from a difficult storm as a stronger all-around force, while the other has quaked under similar pressures, some of which he created himself.

And this LeBron — the one darting all over the place at the end of the Lakers game, pre-rotating into the right spots with a terrifying force for steals, rebounds, and disruptive bumps? This is the guy who will show up for every meaningful moment in May and June.