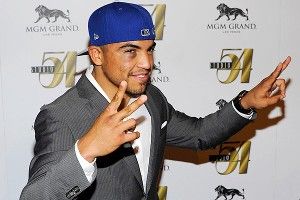 According to the New York Daily News, “sources” say boxer Victor Ortiz will be among the contestants on the next season of Dancing With The Stars. Does this sound like reputable information that Grantland should be repeating without further confirmation? Not at all. But if it gives us an excuse to discuss the man who attached his initials to a product called FaceLube and who stars in the greatest SNL fake commercial that is not a fake commercial, then the Ortiz-on-DWTS rumor is a true blessing.

Before we go further, here are the 54 glorious, hilarious, confounding, homoerotic seconds that threaten to turn Ortiz into an iconic pitchman:


This “VO FaceLube” spot raises numerous questions. Chief among them: Whose idea was it to call the product “lube”? If you spend a moment on the website or take note of Ortiz pretending to use his quart of FaceLube like motor oil in the commercial, then you realize the word “lube” is meant in the “Jiffy” sense. But honestly, is that the first type of lube anybody thinks of? It’s hard to imagine a less appealing name for this product. I’d take FaceOil, FaceGel, or FaceSchmear over FaceLube—and admittedly, those are all terrible names. (If you want a legitimately good name, how about FaceFirst? It relates to boxing and sounds like something I’d theoretically want to put on my face. Just a thought.)

Other questions: Is Ortiz wearing jeans with no underwear? Are the other basketball players slack-jawed (and hitting each other in the head with errant passes) because a dude just rolled up shirtless and pretended to fill his oil tank with FaceLube or because two blondes returned that shirtless dude’s wave? Or both? Have you ever seen anyone with a worse handle than Ortiz at the 37-second mark? Did Ortiz spread FaceLube on his chest as well to achieve that shine? How many takes did they shoot of Ortiz attempting to make a six-foot jumper before they gave up and settled for the separate cut of a ball going through a hoop? When a guy shows up at your pick-up game, hits a shot, and tosses you a bottle of his “Ultra Masculine” facial care product, is he taunting you or just being a philanthropic type who hooks up randoms with free samples?

The FaceLube commercial and the DWTS possibility are merely the two latest developments in what is now a four-year run for Ortiz as arguably the world’s most all-around entertaining and bizarrely fascinating boxer. In the ring, he gave us Fight of the Year contenders in 2009 (vs. Marcos Maidana), 2011 (vs. Andre Berto), and 2012 (vs. Josesito Lopez), an unforgettable knockout loss via sucker punch from Floyd Mayweather, a horribly broken jaw, two fights in which both combatants were on the canvas at least twice, two mid-fight surrenders as a heavy prefight favorite, and one postfight interview in which he admitted to quitting and said he did it because, “I don’t think I deserve to be getting beat up like this.” He also literally is Chris Traeger in terms of misusing the word “literally.”

If the Daily News’ “sources” are correct, Ortiz will become the fifth pro boxer (following Evander Holyfield, Laila Ali, Floyd Mayweather, and Sugar Ray Leonard) to compete on Dancing With The Stars when the new season premieres on March 18. The longer he lasts on the show, the longer it will be until Ortiz fights again, which would be a shame for fight fans since he’s already been out of the ring for eight months and he delivers drama more consistently than any other active fighter. But it would be good news for Ortiz, who may or may not be all that invested in “getting beat up” for a living and seems interested in diversifying his professional portfolio a bit.

We don’t know for sure if Ortiz will be on DWTS, and we don’t know who will make up the rest of the cast. But we do know this: The goal for all the other contestants isn’t to win first prize; it’s to be standing in the right spot to catch that underhand-tossed quart of complimentary lube when Ortiz makes his exit.

Filed Under: Boxing, Dancing With the Stars