A Big Night for the Big East’s Best Rivalry 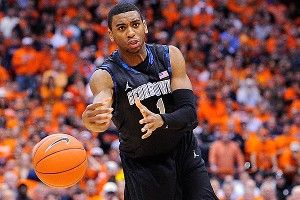 As any adult who was raised in upstate New York knows, there were two athletic rivalries that always made the mullet-topped locals quiver in anticipation.

One was the annual struggle for AFC East supremacy between the Buffalo Bills and the Miami Dolphins. These teams had no natural animus rooted in pre-Louisiana Purchase territorial disputes or moonshine-smuggling routes. They were divisional foes who happened to be good at the same time. As a result, the two yearly showdowns between Dan Marino and Jim Kelly coincided with spiking sales of Darryl Talley jerseys and Zubaz trousers at Dick’s Sporting Goods.

The other notable blood feud was between Syracuse and Georgetown. There was never any geographical or even academic impetus for this beef, either. Cincinnati and Xavier or Kentucky and Louisville are partially turf wars; vitriol between North Carolina and Duke, or Brigham Young and Utah, adds in the acidity of class and theological differences. The “Catholics versus criminals” trope never gained traction here.

Instead, the Big East fueled the rivalry between Syracuse and Georgetown. The conference was established in 1979, and it took little time for enmity to ferment. In 1980, after the Hoyas snapped the Orange’s 57-game home winning streak in the last game played at the arena, then Georgetown coach John Thompson Jr. famously announced, “Manley Field House is officially closed.” In the 30 years since then, an endless war without a true victor or victim has been waged. Syracuse holds the edge in head-to-head play. Georgetown has won more championships in the conference tournament.

There are upstate die-hards who still curse Sleepy Floyd’s name, go into conniptions when they see a white hand towel, and recall every errant jumper that ever spun off the rims in the Carrier Dome. What I remember most are the players. There were Syracuse stars such as Pearl Washington, Derrick Coleman, Billy Owens, and Lawrence Moten. Georgetown’s pantheon of heroes boasts names like Ewing, Mourning, Mutombo, and Iverson. But supporting characters were just as memorable. We rooted for local Orange products like John Wallace and Ryan Blackwell. We sneered at foes like Robert Churchwell and Irvin Church, both of whom seemed to spend a decade in Hoya colors.

With the impending collapse of the Big East, Wednesday’s game could be the last time the two teams play in the Carrier Dome. Last year, when both the Orange and Hoyas were ranked in the top 15, Georgetown notched a road victory. They are both even stronger this season. No. 2 Syracuse came into Wednesday’s game with only one loss this season, a 67-58 defeat to Notre Dame last month. Georgetown took a more arduous route to respectability, beating Memphis, Alabama, Louisville, Marquette, and UConn on the way to a no. 12 ranking. Adding to the theater: With an 880th victory, Syracuse coach Jim Boeheim would slide ahead of legendary North Carolina headmaster Dean Smith to hold the record for the most wins by any Division I coach at one school. What could be more perfect?

The game lived up to its billing. In an overtime thriller — one filled with the customary ugly offense, monumental defensive stands, and timely 3-point shooting — Syracuse edged Georgetown, 64-61. It will be a disgrace if these universities are unable to keep the rivalry alive, but if the tradition comes to an end, it happened the right way.

As usual, Georgetown earned their points with a peasant’s work ethic, scrambling for loose balls and patiently finding cutters in their variation of the Princeton offense. To attack the Orange’s celebrated 2-3 zone, the Hoyas positioned Henry Sims, a senior whose Eddie Murphy mustache added to the night’s ’80s nostalgia, as the fulcrum who distributes from the foul stripe. The strategy was effective, but Georgetown repeatedly clanked open shots. It didn’t matter. In the first 10 minutes of the game, the industrious Hoyas outworked the Orange on the glass and ripped down 11 offensive rebounds. Pinned down by the Georgetown onslaught, Syracuse was unable to sprint out to fast breaks and their half-court offense, as it usually does, congealed to the fluidity of macaroni salad. When the first half ended, the Hoyas held a 31-27 lead.

After losing three starters, Georgetown was regarded as a team in the process of rebuilding around a solid-if-unspectacular group of youngsters. They are much more than that — in part because Otto Porter, a 6-foot-8 freshman from Sikeston, Missouri, is a true baller. Against Syracuse, the elasticized small forward came off the bench to score 14 points, grab 13 rebounds, and dish out three assists. He’s as relentless on the boards as a Georgetown player is supposed to be, but has a feathery midrange touch and guard-like mobility.

If Porter is a rising star, the Orange’s Kris Joseph is already supposed to be one. In numerous screeds about Syracuse this season, I’ve criticized Syracuse’s leading scorer for being a passive, milquetoast Canadian. Last night, he played with aggression — not quite that of a Québécois wolverine-wrangler, but spirit nevertheless. On the way to a career-high 29 points, Joseph looked for his shot, attacked the rim with vigor and even did a rifle-related gesture after knocking down a 3-ball. In overtime, with Georgetown locking down in man-to-man defense, he surged past Porter for a critical basket and later knocked down the deciding 3-pointer.

Scoop Jardine, Dion Waiters and C.J. Fair combined to shoot a wretched 6-for-29 combined, so the Orange’s second-leading scorer was — astoundingly — center Fab Melo. Along with those 11 points, he also grabbed seven rebounds, blocked six shots and drew several charges. Still raw offensively and prone to lapses in concentration, Melo has become an intimidating presence by learning when to simply keep his feet planted and his arms raised. When the giant Brazilian missed several games due to undisclosed academic issues in late January, the Orange were vulnerable. In the team’s first loss, the doughy big man on Notre Dame muscled into the paint for chippies and put-backs with impunity. A few days later, Syracuse was bailed out against West Virginia when officials missed a goaltending violation by backup center Baye Keita with eight seconds left. With Melo back in the pivot, the Orange look tough again.

If Joseph’s scoring binge saved Syracuse’s ass offensively, Melo did it on defense. With five minutes to play, he spiked a Mikael Hopkins layup attempt to nearly midcourt. On Georgetown’s last possession, he got deflected Sims’ potential game-winner. In overtime, he took a key charge. Melo may never be a great professional basketball player. He may never be a great college player. But anyone who cares about Syracuse or Georgetown will remember his contribution to this game, and the Big East’s best rivalry.