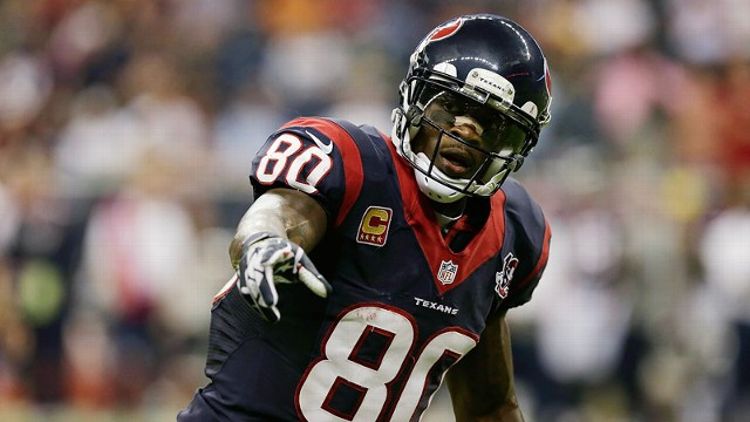 Along with being the two best wide receivers in the NFL last season, Andre Johnson and Calvin Johnson have a lot in common. They share a last name, they played their college football at schools now in the ACC, and they were taken in the top three of their respective drafts. They also, in a way, represent the end points of the Detroit Lions’ road to wide receiver redemption.

The end of that road came in 2007, when the Lions took Calvin Johnson second overall. All Megatron has done since is earn one of professional sports’ best nicknames and put together a stretch of seasons that, at 27, already have him in rare historical company.

The beginning came four years earlier, during the 2003 NFL draft. That year, there were two wide receivers considered to be top-10 talents. One was Michigan State’s Charles Rogers, a 6-foot-4 220-pounder who imposed his physicality on defensive backs and had the 4.4 speed to run by them. The other was Andre Johnson, the Miami receiver who combined a collection of excellent physical traits with a substantial feel for finding space in defenses. When it came time for the Lions to make their pick, the second overall, they went with the local kid. A series of injuries and positive drug tests led to Rogers playing only 15 games in a Lions uniform before eventually being released in 2006. Detroit compounded its receiver problem by drafting Roy Williams seventh overall in 2004 and Mike Williams 10th overall in 2005. As the Lions have struggled to find a complement to Megatron, Andre Johnson, who was taken one pick after Rogers, has spent the past decade quietly being one of the best wide receivers in football.

I bring this up not to torture Lions fans (but seriously, Andre Johnson and Calvin Johnson could very easily both be Lions right now), but also to note that for as clear as Megatron’s greatness has been, Andre’s collected efforts still somehow seem overlooked. Maybe it’s just easier to put it this way — over the past five seasons, Andre Johnson has belonged right beside Megatron in conversations about the best wide receiver in the NFL.

The raw totals partially support that claim. In total yards from 2008 to 2012, Andre ranks third among wide receivers (behind Calvin and Roddy White), with 6,450 yards. He’s fourth in receptions (one spot ahead of Calvin; Wes Welker is no. 1 by a mile). What hurts Andre Johnson is his 31 touchdown catches, which is only 13th.

There are a couple possible explanations for that. The first is that the Texans run the ball near the goal line more than most teams. Since 2008, 56.4 percent of Houston’s goal-to-go plays have been runs — the seventh-highest percentage in the league (Detroit has thrown 57.5 percent of the time). Of the teams ahead of the Texans, only one has a wide receiver in the top 10 in touchdown catches (White, whose 43 are even more impressive knowing the Falcons have run the ball the fifth most often). The second is that Johnson has played significantly fewer games than anyone else near the top. Among the top 10 in total yards, only Johnson and Vincent Jackson have played fewer than 70 games (both have 68), and Johnson has 1,500 more yards. That’s an entire All-Pro season.

Breaking the numbers down per game, Johnson’s edge becomes clearer. His 94.9 yards per game are the best in the league over that stretch, three more than Megatron’s 91.9 and more than 12 better than third-place White. His 6.57 receptions per game are second only to Welker’s ridiculous 7.27. And in terms of touchdowns, Johnson averages only about 1.3 fewer per 16 games than White.

Is that enough convincing? No? You want more? OK, cool. If we get even a touch more granular, we can see that Houston’s run-based offense also plays a factor in limiting Johnson’s overall production. According to Pro Football Focus, Johnson led the league last season in yards per pass route run. In fact, he’s been in the top three every year since 2008. No one else has ranked that high even twice.

Staying healthy is and should be a part of how players are evaluated. Over time, a player who plays more games has a greater overall impact, obviously. But it should only slightly discount what Johnson has been able to do when he’s been on the field, and that he’s done it as the only wide-receiving threat of the Matt Schaub era. And that’s without even mentioning the smaller parts of the game — intermediate route running and run blocking — where Johnson has long been considered one of the league’s best.

The reason that Johnson is someone to get excited about this season, though, is that last season, at age 31, he had one of the best years he’s ever put together. His 1,598 yards were a career high, and his 112 catches were the second most he’s ever had (and he still wasn’t voted first-team All-Pro). He ranked second in Football Outsiders’ Defense-Adjusted Yards Above Replacement, and his 69 percent catch rate is the best it’s been in the five-year stretch we’ve been looking at. If Johnson can put together another season like that, despite the injuries, he’s still looking at a place among the best receivers ever. Just one more 100-catch season would put him 15th all time, just behind Torry Holt, and 1,500 more yards would put him in a similar range on that list. Considering what Johnson did last season, it’s reasonable to believe he’s capable of another year like that (if not two).

Ultimately, though, totals will never speak for how great Johnson has been and continues to be. Only one player, Calvin Johnson, has ever averaged more receiving yards per game, and he’s done it as a part of one of the most pass-happy offenses in NFL history. In recent years, when he’s played — and he’s played often enough — nobody has been better than Andre Johnson.

About Last Night: Let's Call It Even