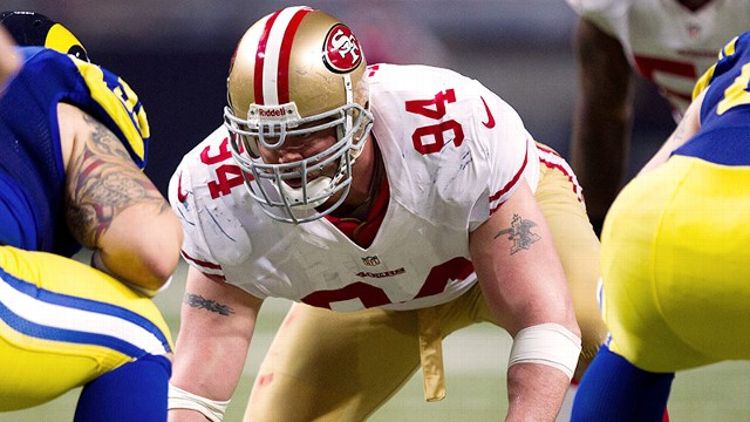 Before the 49ers were the most talented, best-built team in pro football, they were the team with Patrick Willis and Justin Smith. Willis was a star from the start, with six Pro Bowl trips in his first six seasons, and it’s hard to imagine him being anything but a 49er for a very long time. Smith came to San Francisco in Willis’s second season, via a massive free-agent deal after his time in Cincinnati. Justin Smith is the rare player who’s so good at the things that normally go overlooked that it becomes impossible to overlook them.

In 12 NFL seasons, Smith has just 75.5 sacks, but the consensus is that he’s been one of the best defensive players in the league for most of his time in it. The phrase “country strong” was invented because of Justin Smith, and the Jefferson City native (mid-Missouri, represent; additional note: Smith has an Anheuser-Busch tattoo on his left arm) has used his immovable body and incredible hand strength to become an absolute nightmare for entire offenses. If there are any questions about what Justin Smith means to the 49ers, all anyone needs to do is look at Aldon Smith’s sack total after Justin Smith tore his triceps against New England in Week 14. It was exactly zero. I wrote before the Super Bowl last season that Smith was the most important player for either team, and while watching the game knowing that Smith was burdened by both his injury and a bulky brace, my assessment didn’t change. For the past few seasons, Justin Smith has made the 49ers go.

That’s why yesterday’s news is welcome for anyone who loves either the 49ers or the NFL. Smith, whose contract was set to expire at the end of this season, signed a two-year extension with San Francisco that will keep him there through the 2015 season. He acknowledged that he doesn’t know if he’ll even stick around that long, considering his lack of interest in ever being just a rotation player, but it’s good to see that one of the NFL’s best players gets to go out “on his own terms,” as Smith put it. Now we’re ensured that Smith will be where he belongs, chasing a championship with a franchise whose return to greatness he helped define.