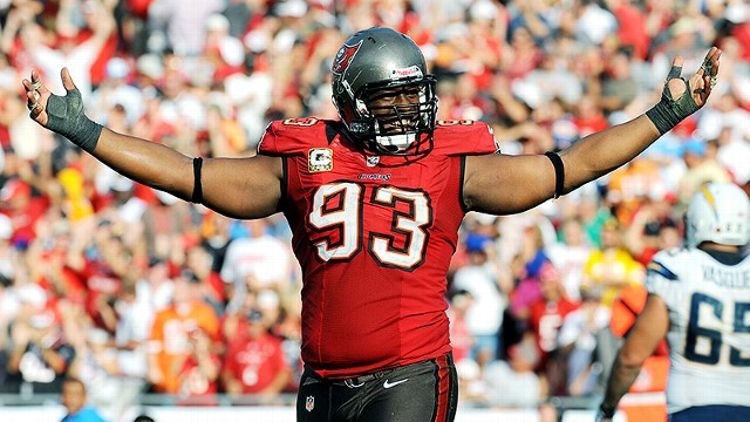 There’s really no way around it — the 2011 Buccaneers were a mess. Tampa Bay finished with a 4-12 record, but the real worrisome part was how it was losing. The Bucs dropped their final 10 games, losing seven games by at least two touchdowns, four by at least three, and giving up at least 30 points in seven of the nine games following their Week 8 bye. The requisite firings took place — head coach Raheem Morris and the rest of his staff lost their jobs, and the Bucs were left to start over with former Rutgers coach Greg Schiano.

General manager Mark Dominik, however, was retained, and he spent the following offseason chasing down some of the bigger free-agent names to be had. Tampa Bay brought in one of the league’s best guards in Carl Nicks and handed wide receiver Vincent Jackson a five-year, $55 million contract in an effort to surround Josh Freeman with the high-grade weaponry needed to properly evaluate a potential Quarterback of the Future. Nicks actually missed a majority of the season with a torn plantar plate in his foot, but even without their true free-agent prize, the Bucs managed to finish 7-9 (with seven of those nine losses coming by just one score). They did so for two major reasons.

The first is a 2012 draft that was nothing short of excellent. Top-10 pick Mark Barron was solid if unspectacular at safety (a notably difficult position at which to make an early impact; also, Tampa’s added talent in the secondary this year should go a long way in his personal improvement), but it took no time for the Bucs’ next two selections to make an immediate impact. Doug Martin, for whom Tampa traded back into the first round, rushed for 1,454 yards as a rookie, and, maybe more impressively, the Muscle Hamster did it no matter who was blocking for him. Lavonte David, a linebacker from Nebraska whom the Bucs took in the second round, had 139 tackles — tied for the eighth-highest total in the league.

The other reason Tampa Bay was vastly improved last year was an increase in overall effectiveness and effort from its defense. When compared with the product on the field last year, that the Bucs gave up 40 points in three of their final four games in 2011 is an indication of just how thoroughly they’d quit on Morris. Tampa Bay gave up an average of 82.5 yards per game on the ground a season ago, the best mark in the league. Part of that success was David, Gerald McCoy developing into one of the league’s best defensive tackles, and Michael Bennett stopping the run as well as any defensive end in football, but it also had to do with the relentless style of defense Tampa Bay employed. This year’s team will be without Roy Miller and Bennett, two of the players who aided in making that run-stuffing possible, but McCoy and David should be the nucleus of a good run defense for some time.

Tampa’s issue on that side of the ball was in the back end. According to Football Outsiders, the Bucs had the 26th-ranked pass defense DVOA in the league a year ago, and Eli Manning’s 510-yard comeback performance in Week 2 should serve as adequate anecdotal evidence for the team’s pass-defense problem. The majority of Tampa Bay’s moves this offseason have been in support of solving that problem. When free agency began, the Bucs signed All-Pro safety Dashon Goldson to a five-year, $41.25 million contract. There are those who think Goldson’s success in San Francisco was largely a product of belonging to an excellent defense, but paired with the young Barron, he should at least provide an upgrade.

In the draft, the Bucs essentially used their first- and second-round picks on a pair of cornerbacks — it just so happens that one of them is already the best cover guy in the league. There’s no telling if Darrelle Revis can still be the most influential defensive player in football, but for what it took to get him, I’ve got to imagine the Bucs are still celebrating. Bill Barnwell broke down the deal immediately after it happened, but the gist is this — the Buccaneers traded the 13th overall pick in a weak draft for the league’s best corner, and they signed him to a deal that involves zero guaranteed money. In a risk-averse business, this was essentially the ultimate personnel transaction. Fellow starter Eric Wright should benefit from Revis’s presence on the other side, and the team’s third corner will likely be Johnthan Banks, the Mississippi State product who many considered to be a first-round talent but slipped all the way to the second.

Where the Bucs’ defensive concerns remain is how they’ll get after the quarterback. McCoy is an excellent push-the-pocket rusher inside, but losing Bennett in free agency leaves Tampa Bay without a proven pass rusher on the outside. Part of the thinking behind the Bennett move was reportedly an interest in finding out what the team has in 2011 draftees Adrian Clayborn and Da’Quan Bowers, both of whom were injured a year ago. Players drafted in the first two rounds are expected to develop into reliable starters, but neither has emerged as one quite yet.

For the most part, though, that’s where the major questions on defense stop. Looking at the majority of Tampa Bay’s roster — Martin, Jackson, two returning Pro Bowl guards, David, McCoy, Revis, and Goldson — this seems like a surefire playoff team, but as things go in today’s NFL, the Bucs’ ceiling will be determined by their quarterback play. Freeman enters this season on the last year of his rookie contract, and his performance this year will likely determine his long-term fate in Tampa Bay. The Bucs drafted NC State quarterback Mike Glennon in the third round back in April, and if Freeman proves that he isn’t the answer by the end of this year, they already have another potential option in place. As is the case with quarterbacks like Sam Bradford or Jay Cutler, the excuses about lack of help are dwindling for Freeman. For the most part, Tampa Bay seems ready for a playoff run, but it will be on Freeman to make it happen.