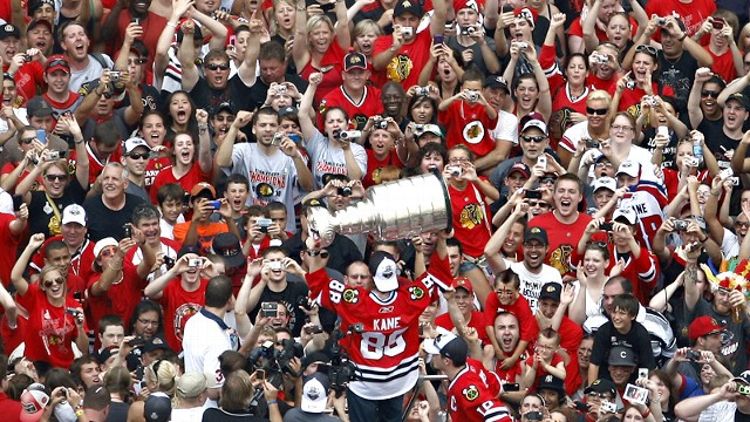 When fresh hire Alain Vigneault addressed reporters at Radio City Music Hall last week after an unprecedented bicoastal Torts swap, he shared a recent Kodak moment. Having browsed some snapshots of the New York Rangers’ 1994 victory parade, it became “real clear … there is no better place” to win the Stanley Cup. (It’s a far cry from this.) Toronto fans nursing a 46-year Cup drought, thousands of whom transformed Maple Leaf Square into a sea of royal blue merely for this year’s quarterfinals (and to watch televised away games, no less) might disagree. When 2 million Blackhawks fans flooded the Loop in 2010 to celebrate their first Stanley Cup victory since the Kennedy administration, a convincing case was made that Chicago was North America’s premier venue for postseason sendoffs. Standing atop the media deck at Hutchinson Field in Grant Park only three years later, looking out across an even more resplendent crowd, I can’t disagree.

The Blackhawks weren’t supposed to be here. As Sean McIndoe pointed out this week, a second Cup in four years is a “glitch in the system” in the cap era, an anomaly by a team that “forgot to stay gone.” The first true victims of a championship fire sale due to the cap, the Blackhawks were forced to part with nine players (and an assistant coach, to boot, shipped unceremoniously to “Blackhawks South,” as the Atlanta Thrashers were briefly known before decamping for Winnipeg) within weeks of winning it all. This historic depletion resulted in the first Pyrrhic victory for Chicagoans to digest since Michael Jordan sunk his final shot as a Bull in Salt Lake City. Despite all odds, the Blackhawks’ much-discussed playoff bounces that followed were obliterated on Monday night by Dave Bolland’s dagger with less than a minute on the clock, the latest a Cup-winning goal has been allowed in regulation in Stanley Cup final history. (However, in a rude reminder of the realities of the cap era, Bolland is reportedly already being shopped for a trade. From Cup raise to cap space.)

After a few midweek misfires with trophy appearances, from the Cup being held backstage by the Backstreet Boys to a quick dip into a Bentley dealership, all the way to Coach Q’s TP’ed suburban home (though this aw-shucks image of the proud bench boss admiring his vandalized trees is an early contender for most endearing celebration moment), the Cup is back where it belongs: on a trolley on Michigan Avenue, touted by players with flecks of ticker tape in their mullet tails.

In the years between 2002 and 2008, a period bookended by Detroit championships, hockey fans witnessed a fascinating stretch that could perhaps be dubbed the Parking Lot Era, in which Stanley Cup celebrations were not necessarily citywide; festivities for small-market winners often funneled back to the familiar confines of their home arenas (or, in the case of the New Jersey Devils, the actual Meadowlands parking lot). In 2007 the Cup arrived at the Honda Center by helicopter, an appropriate airborne touch for the Anaheim Ducks, before Arnold Schwarzenegger took to the podium to drop some “hasta la vista babies.” In Carolina in 2006, the Hurricanes were landlocked, arriving with the Cup via pickup truck.

The disparity between those celebrations and the potential parades that would’ve erupted in Cup-starved, media-saturated Canadian markets rendered second-best during the Parking Lot Era — Calgary, Edmonton, and Ottawa — is startling. (Nate Silver, for one, has plenty to say about the benefits of an NHL with as many as 11 franchises up north). But what’s done is done. Odds are a Canadian team won’t have to wait another 20 years to hoist the Cup, but there’s no denying it’s getting a little weird. Though why should the NHL complain? Since Detroit reclaimed the crown in 2008, the league has been flush with big-city matchups, leading to record-breaking television ratings and displays of civic pride in hockey hotbeds, culminating in today’s multimillion swarm across Chicagoland.

Hours before the parade, the sights in the Loop were already served up Chicago-style: vendors peddling knockoff T-shirts (I savor the roster typos on the back), Art Institute lions sporting Hawks helmets, suburbanites flinching beneath the Wabash L tracks, camouflaged state police in idling SUVs along Balbo, a group of kids rapping and chanting “Got that corduroy sweat!” in the early morning sun.

This year, team awareness seeped into more neighborhoods than during the Blackhawks’ 2010 Cup run, and a wider dragnet outside the city limits has ushered in a new era of hockey supremacy in Illinois. Accusations of bandwagon-jumping are decisively irrelevant at this point. Claims about there being two Chicagos — Chiraq to the south and the hockey-crazed corridors to the north — are, admittedly, more valid than ever. But for a moment, the city can claim some form of unity, if even for a single afternoon. The lone casualty was Illinois governor Pat Quinn, who caught a swift smattering of boos when he took the stage. Decreeing this Blackhawks Day blunted the edges a bit, however.

On the media platform before the rally in Hutchinson Field, the menagerie of local reporters and crew were keeping busy toeing their marks and bopping beach balls back into the masses whenever they dribbled over the chain-link fences. Anticipation was high. Even the “proud sponsor of the Chicago Blackhawks” bumpers after advertisements on the Orwellian screens flanking the stage drew cheers. Soon they were swooning over a clean-shaven Patrick Sharp as the trolley cams captured him and the team making their way from the United Center to the Magnificent Mile.

A cameraman and I winced when the screens showed fans risking fatal falls as they climbed the steel frame of the Washington Boulevard Bridge to catch a peek at the top of the double-decker buses. (Of course they had nothing on these daredevils, who recently base-jumped off the Trump Tower a few blocks to the east.)

Sprinkles of confetti all the way from Columbus Drive signaled that the motorcade was closing in quick on the park. When they weren’t dodging complimentary water bottles being tossed at their heads, the masses holding signs reading “Shawsome” and “I Love Shinpads” instantly launched into full-throated support. We soon learned there was an organ transplant of sorts, as longtime Blackhawks organist Frank Pellico was onstage to join Jim Cornelison for a rousing rendition of the national anthem. (It roundly beat the milquetoast playlist that had been previously warming up the crowd — enough “Crazy Little Thing Called Love” and “Beautiful Day,” just play “Robot Rock” already.) Psyched players in flip-flops took to the stage one by one — some, like Brent Seabrook, still in hair-farmer mode — and graciously accepted the shower of support from the crowd. (In the 80-degree heat, I had to wonder: Was Tony Esposito OK wearing that jersey?) Jonathan Toews proved the most hoarse, in full Nick Nolte voice, while Patrick Kane took the slow-roller approach, soaking up the moment behind wraparound shades. The highlight, if you haven’t heard by now, was Kane’s acknowledgement that his netminder, Corey Crawford, was perhaps snubbed for the Conn Smythe Trophy. Kane declared Crawford “the best player in the playoffs” and awarded him the team-sanctioned championship belt to wear for the day (or perhaps the entire offseason; Crow looked as if he’d never part with it). Taking the mic, Crawford took the opportunity to work blue and praise a team that “fuckin’ worked their nuts off.” The crowd erupted. Crawford chuckled sheepishly when he reunited with the pack of red sweaters behind him, as if he’d been the lone wallflower to dart out into the middle of the dance floor and ask a girl to dance, only to say he was just kidding before zipping back in retreat.

As the crowd filed out, a bulldog hung both his paws out the open window of a white Escalade at a stoplight on Lake Shore Drive &#8212 it wasn’t clear whether he was embarrassed by his horn-blowing owner or if he was checking out the drunk girls in short shorts stumbling along the sidewalk. I shared his ambivalence, as the dawning moments at any event of this scale are often a bit underwhelming: seagulls stuffing themselves on litter, dehydrated dudes deciding it’s time to go shirtless, Port-o-Potties getting real horrorshow.

Fortunately a friend offered his perch from the 50th floor of a skyscraper on Randolph Street to collect my thoughts. For this I am forever grateful. The view from above and the solitude of the ear-popping elevator ride on the way up was the ideal way to cap a Cup parade. Level with the helicopters hovering as they made their final rounds capturing the crowd dispersal below, my view spanned across Lake Michigan, far beyond Chicagoland to the flatness of Indiana.

James Hughes is a Chicago-based writer and editor who has contributed to Slate, The Atlantic, Wax Poetics, and The Village Voice. For a decade, he was an editor and publisher of Stop Smiling magazine and its book imprint.

About Last Weekend: Uh-oh … the Buccos!