55-Day NFL Warning: That Was Not a Dream, Bears Fans. Brandon Marshall Really Is Here. 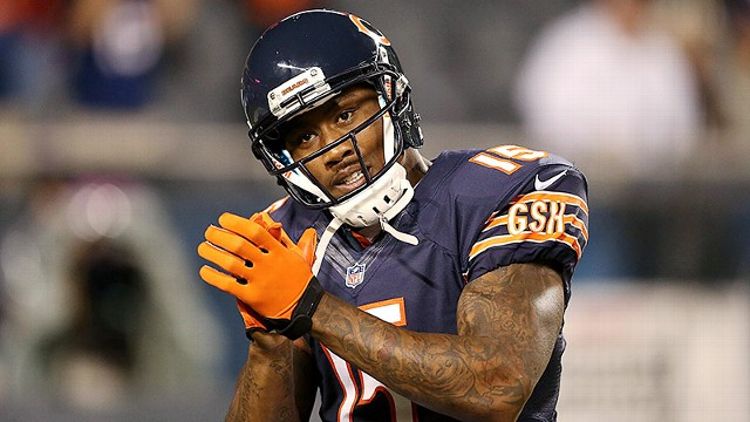 When the Bears traded for Brandon Marshall a year ago, it was hard to explain to the rest of NFL fans just what it meant. Marshall came with plenty of issues, both personal and on the field (drops, lack of touchdowns, etc.), but when Bears general manager Phil Emery gave up just two third-round picks to bring Marshall to Chicago, we rejoiced.

Since 2000, the Bears had seen one receiver eclipse the 1,000-yard mark — Marty Booker, who’d done it twice. Booker’s 100 receptions in 2001 were also a single-season franchise record. The minute Marshall took the field, he was already the most talented wide receiver in Bears history. It’s been dark, guys — really dark.

All Marshall did in his first season was haul in 118 catches for 1,508 yards and 11 touchdowns — all career highs. He made plays like the one at 2:52 above, when he drives Casey Hayward into the ground with one hand before finding the end zone. Or at 1:04, when he comes back for a Jay Cutler pass that helps the Bears into field goal range while down three in the final minute. Or — actually, ya know what? All of them. The best 10 plays ever made by a Bears wide receiver probably all belong to Brandon Marshall.

That brings us to this year. As part of Marc Trestman’s offense, there’s a very good chance Marshall doesn’t approach the totals he put up in 2012. It took 194 targets for Marshall to get his 118 catches, and with Martellus Bennett and more focus on Matt Forte in the passing game, Cutler’s reliance on Marshall is likely to lessen. There are also the concerns about Marshall’s lingering hip problem. The spin, as it usually is with these things, is that after offseason surgery, Marshall will actually be more healthy in 2013. So, sure, let’s go with that.

Either way, the Marshall trade is already a win — for Emery and for Bears fans. There’s no telling how long it will take the Bears and Cutler to adjust to Trestman, but even with Marshall’s targets diminishing, he still gives the Bears the type of force on the outside they’ve never had. Ninety catches for 1,300 yards and those same 11 touchdowns won’t be too disappointing if they come as part of an above-average offense that’s headed to the playoffs.

Video: Jalen Rose on High School Basketball Stars Staying Back in School to Get Ahead