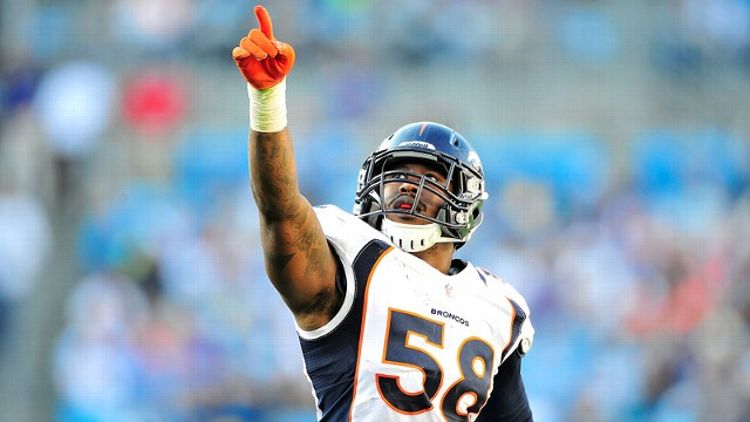 In almost any other season, what Von Miller did in 2012 would’ve been enough to not just win Defensive Player of the Year, but win it unanimously. According to Football Outsiders, to go along with his 18.5 sacks, Miller was also fifth in the league in quarterback knockdowns (combined sacks and hits), first in hurries (by their tally, his 41 were seven more than the man in second place, Chris Long), third in run tackles for loss, second in fewest average yards allowed per run tackle (to J.J. Watt), and second in defeats (also second to J.J. Watt).

The second pick in the 2011 draft, Miller was also the second-best player in the NFL last season, and the Broncos have found themselves a pass-rushing, run-stopping force. Labeling Miller a 4-3 outside linebacker is almost an insult. He may be the most unique defensive player in the league, capable of lining up all over a defense and doing whatever Denver asks of him. In rounding up the best pass rushers in the league yesterday, I decided Miller needed an analysis all his own. And what better way to get ready for 2013 than to count down Miller’s personal top 10 from 2012.

(The plays are linked where video was available; his pick-six against Tampa is not included, mostly because you could’ve made that play.)

Only in his second season, Miller already has a healthy collection of pass-rush moves with which to torture offensive linemen. On a pass play in the fourth quarter against Atlanta, Miller’s spin move on the right tackle looks to be thwarted by the waiting guard, but the tackle is so thoroughly lost that Miller is able to move back outside and drag Matt Ryan down in the backfield. We should also note that the man embarrassed on this play is Tyson Clabo, who was sought as a starter by more than one team this offseason.

The Broncos eventually lost to New England in Foxborough, but it might’ve been even uglier without a third-down stop by Miller just before halftime. He didn’t have to fight off any blockers, but it was still an open-field tackle, four yards in the backfield, from his knees. One area in which Miller thoroughly outshone Watt last year was in their individual performances against New England. Contrary to what some people think, Watt actually played quite well in the regular-season match-up against the Pats, but Miller had his best game of the season, with a handful of tackles for loss and two sacks.

With 12:22 left in the first quarter against Carolina, Miller actually dropped into coverage as Newton went back to pass. But as Newton drifted outside the pocket to the left, Miller covered the distance between him and the Panthers quarterback in what seems like an instant. Take a look at the video. It really does look sped up.

This is the only entry on this list that doesn’t end with a Miller tackle, but it’s probably the most impactful. After chasing Cam Newton all around the Panthers backfield, Miller manages to trip him up as Newton throws downfield to Brandon LaFell. The result is a Tony Carter interception brought back for a touchdown.

On this delayed handoff deep in Panthers territory early in the second half, Miller starts the play by rushing outside, jumps inside, and then jumps back to his left to drag Williams down four yards in the backfield. Peyton Manning’s reaction in the video is the proper one.

The best indication of how superior Miller is as an athlete might not be in his speed, but in his balance. Miller leans on the standard dip-and-rip approach to speed rushing the same way most pass-rushers do, but the difference is how low that dip goes. If most players tried getting as low to the ground as Miller does, while still moving full speed, they’d end up face-down on the turf more often than not. There are plays in which Miller leaves so little of his body available to offensive tackles that he actually makes it, untouched, to the quarterback. His strip-sack of Carson Palmer, which came deep in Raiders territory as the Broncos led 16-7 in the third quarter, was one of those plays.

3. Broncos vs. Bengals, Week 9: The Disposing of Andre Smith

Andre Smith weighs 330 pounds. He was also one of the better right tackles in the NFL a year ago. In the third quarter against Cincinnati, Miller, in an effort to get his third sack of the day, chooses not to go around Smith but to go through him. He drives Smith into the backfield, tosses him onto his back, and drags down Andy Dalton. Most of Miller’s highlights look like they’re in fast-forward, but this is the sort of pure power we’ll likely see more of as Miller gets into his mid-20s and looks for different ways to dominate tackles.

Just watch this one. I don’t know what to say.

There are plenty of pure pass-rushers throughout the league, but the totality of Miller’s dominance is realized only through how great he was against the run a year ago. The collection of plays to choose from is sizable, but this was the best — by a wide margin. Everything about Miller dropping Jamaal Charles four yards in the backfield in the second quarter of Denver’s regular-season finale was perfect: how he squeezes down the edge, how he takes on the block with his inside shoulder, and how he bounces off of it to drag Charles down. This guy is on a plane populated by only one other player, and if I had to bet on it, I’d say this is the year Defensive Player of the Year is his.