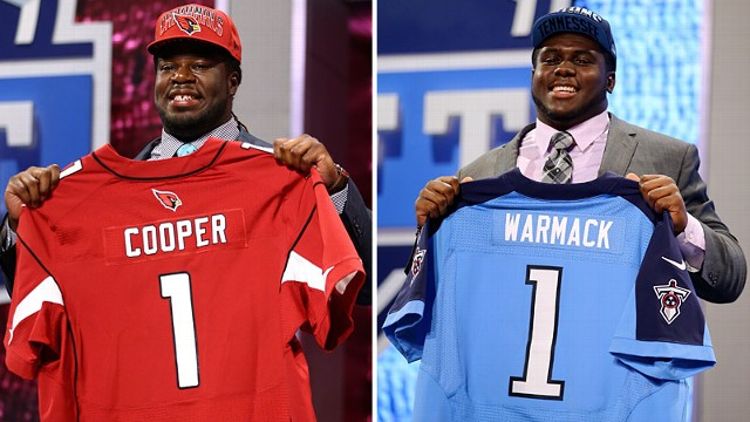 Yesterday morning, Titans guard Chance Warmack became the last first-round pick from April’s draft to sign his rookie contract. The day before, Jonathan Cooper, the North Carolina guard picked seventh overall by Arizona, had agreed to his own deal. And it will be far from the last time their careers follow each other in step.

Before this year, the last guard to be taken in the top 10 overall was Chris Naeole, who was taken 10th overall by New Orleans in the 1997 draft. Since, guards have been marginalized to the bottom half of the first round, with seemingly no regard for how talented any given player is. Steve Hutchinson figured to be a perennial fixture in the Pro Bowl. Alan Faneca was similar. Even as first-round guards developed into some of the safest bets available in the eternal gamble that is the NFL draft, players like David DeCastro continued to tumble.

The (potential) reasoning that led to two guards going in the top 10 after not a single one had gone that high in 16 years seem to be three-pronged:

1. Teams finally realized that drafting a guard in the first round was a means to acquiring a reliable player where reliable players aren’t always easy to find (see Iupati, Mike)
2. Schematically, guards have never been more important. With the league’s elite pass protectors stationed on the outside, defenses are doing more and more to create mismatches on the interior to beat a line’s lesser pass blockers and collapse the interior of the pocket. Finding guards that can block Geno Atkins, Henry Melton, and even Aldon Smith is now paramount.
3. Cooper and Warmack are so talented that there was only so far they could fall.

I tend to believe it’s a little bit of all three, and I’ve previously touched on the first two more than once. Now that the draft has passed and the season is approaching, I’m more concerned with the third, and with how each will stack up to those expectations — both individually and as a pair.

The 2008 NFL draft saw eight offensive tackles go in the first round. It’s impossible to evaluate the careers of those players (in order: Jake Long, Ryan Clady, Chris Williams, Branden Albert, Gosder Cherilus, Jeff Otah [remember Jeff Otah?], Sam Baker, and Duane Brown) independent of the others, even if that may be unfair. The members of a draft class are always inextricably linked, and with Warmack and Cooper, that link will be accentuated by the uniqueness of their situation. They are the first players at their position to go as high as they did in a decade and a half, and they did so in the same year.

They’re very different players who will be positioned for success in very different schemes and situations. Warmack is a physically dominant mauler capable of defining a team’s running game. If you need any evidence, go back and watch last year’s national championship game. Warmack was the best player on the field for Alabama (as he was for most of the season), and the Titans’ reported commitment to a power running game isn’t a separate decision from acquiring Warmack and Andy Levitre this offseason.

Cooper profiles as the ideal version of the modern guard. He’s extremely mobile, with the feet to both pull to points all along a formation and to stonewall interior linemen in the passing game. Warmack was considered the best player in the draft for much of last college football season, but it’s the array of Cooper’s skills that eventually made him the first guard taken.

Taking into account their differences, and the often overlooked importance of context and situation in a player’s success, it’s probably unfair to view one’s eventual successes or failures in relation to the other’s, but it also adds an undeniable layer of interest. For the remainder of their careers, we’ll have another plane on which to assess them, the 2013 draft, and the idea of whether guards belong in the top 10. Admitted fans of interior line play won’t need any more incentive in monitoring the Cardinals and Titans, this season and in the future, but with these two it’s pretty apparent there’s a little more in play.