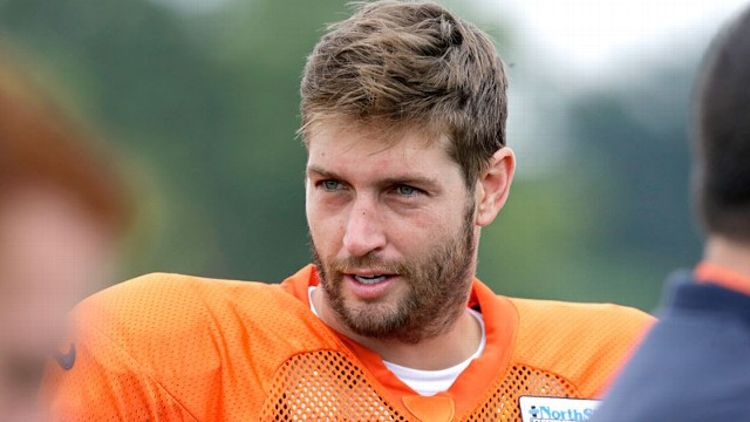 1. Jay Cutler has a beard, and Jay Cutler with a beard is Stephen Baldwin’s character from The Usual Suspects. You’re welcome. (There’s a Brandon Marshall–Redfoot joke in here somewhere, but I think I’ve done plenty already.)

In terms of actual football, Cutler looked how Jay Cutler would typically look in a training camp setting, where ideal conditions allow raw ability to come across unimpeded — so, quite good. Head coach Marc Trestman said afterward that he was pleased with the amount of explosive plays the Bears had, but like any other day, that excitement has to be tempered until he checks out the tape. There’s no sense in celebrating a big play that was only allowed to happen because Julius Peppers pulled up before attempting to ether Cutler (I can say for certain that did happen at least twice).

Cutler’s protection was the Bears’ no. 1 offseason priority, and it took only until the second day of training camp for it to become a problem. Free-agent prize Jermon Bushrod is out with a calf injury, which has J’Marcus Webb working on the left side. In case you were wondering, Peppers is still too much for J’Marcus Webb. With Jonathan Scott also out, that meant a lot of former Jags bust Eben Britton manning the right tackle spot. There have been early concerns about the protection problems (understandable, considering they’ve been worth worrying about for a very long time), but there’s no sense in getting really worked up until a Bushrod-Webb combination starts to struggle. Kyle Long was also working in with the first unit at right guard. The first-round pick has a ways to go after missing OTAs due to Oregon’s late graduation date, but Trestman said he’s “working in an ascending manner.”

2. Marc Trestman says things like “working in an ascending manner.” Between Trestman and GM Phil Emery, the Bears stack up with any team in the league when it comes to their press-conference talent. I don’t know if you get extra points for that, but I’ll look into it.

3. One of the first plays I saw was a Cutler touchdown pass to the back corner of the end zone, to who I thought was a wide receiver wearing no. 83. No. 83 is actually new Bears tight end Martellus Bennett, whose legacy in Chicago after that catch is already better than Kellen Davis’s.

The confusion was partly because of how smoothly Bennett went over a defender to pick the ball out of midair. He had his issues in Dallas, but if last season is any indication, he’ll be a major part of the offense here (and that doesn’t even take into account his excellent run blocking).

At one point, Bennett, Alshon Jeffery, and Brandon Marshall were standing side-by-side on the sideline, and it made seeing the action on the field virtually impossible. Each of the three is at least 6-foot-3, and the trio will likely make up the most frequent non–Matt Forte targets for Cutler in the passing game. If there’s any area of the field where the Bears should excel this year, it’s down near the end zone. About 20 minutes after Bennett’s touchdown grab, Cutler found Jeffery over the middle for a score of his own.

4. Julius Peppers looks great. Peppers elected not to directly address a question about his health from last season (instead choosing to go the “everyone was sore” route), but it was clear that his early-season plantar fasciitis bothered him at times last year. Peppers met with the media yesterday for the first time since camp began, and he responded to questions about his increasing age by responding that he “feels 25.”

He looked it. More than once, he got to Jay Cutler as the quarterback was finishing his drop. The Bears finished first in defensive DVOA last season thanks to some unsustainable turnover help, but having their best player return to health and form should go a long way in combating the regression that should come with fewer defensive scores.

5. Rookie Jon Bostic took over defensive play-calling duties as Lance Briggs took a day off to rest. Both Peppers and Trestman were complimentary of the job the Florida product did his first time out. Bostic will get his chances to play early, and showing he can shoulder that type of responsibility within the first few days will go a long way in making that happen.