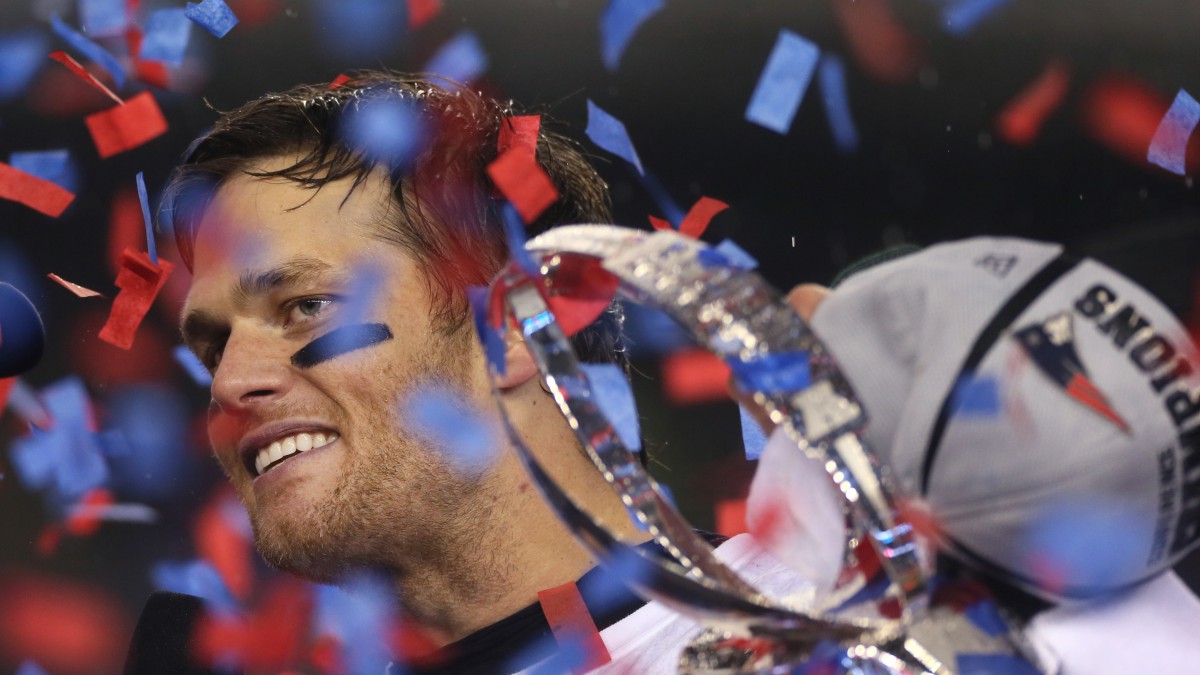 At the end of the third quarter, when the New England Patriots already led, 38-7, and with the rain falling so hard it looked like a solid wall of mist and fog, Indianapolis Colts punter Pat McAfee launched one 57 yards through the weather toward Julian Edelman, who fielded the ball and headed upfield. Off to one side, New England special-teams ace Brandon Bolden spotted Indianapolis linebacker Andy Studebaker closing in on Edeprilman. Studebaker, alas, did not see Bolden, who utterly obliterated him, freeing Edelman for a 45-yard return, and making a play that came to define New England’s eventual 45-7 win, at least in the way Bolden described it.

That was the game. People saw it coming. People knew it was going to be bad, but then it got real, real bad in a hurry. The Colts were obliterated as surely as Studebaker was. Meanwhile, the Patriots leave the field entwined in a legacy that is still green and still growing. This will be the team’s eighth appearance in the nation’s most prominent exercise in hype and nachos, and this is an operation that, 25 years ago, was being peddled to any city in America where they could find suckers who didn’t know how bad the Patriots really were. (My memory goes back to the days when the Boston Patriots once played a game in Birmingham, Alabama, and not a soul in Massachusetts knew they were out of town.) This will be the sixth Super Bowl for Tom Brady and Bill Belichick, which is more than any other quarterback-coach combination in NFL history. Brady has won more postseason games than any other quarterback. Belichick has won more playoff games than any other coach. If the Patriots win in Arizona, the two of them will have won four of these things, and will have legitimate claims at being the best ever at their jobs. (“Do your job!” is this year’s New England slogan, and, yes, you will be sick of it long before kickoff in Glendale.)

This is not a denouement you anticipate when you’re a sixth-round draft pick, and Belichick is still not all that long removed from having his entire franchise pulled out from under him in Cleveland. In the long arc of history, then, this isn’t a conventional ugly-duckling tale. In this one, the duckling grows up to be an F-16 and it strafes the record books into shreds and confetti. It really is one hell of a thing.

“I haven’t had too much time to reflect,” Brady said. “I think we’re right in the middle of it.”

It was not very much of a contest, especially by comparison to the turnover-laden hysterics in Seattle. (There will not be a better or more charming sight in the NFL this year than that of Seattle’s Michael Bennett, riding a bicycle around the field after the game.) Brady threw a bad interception deep in Indianapolis territory early on, and the Patriots led only 17-7 at the half. But they also were the only team on the field that looked like it had any kind of plan at all. There was a palpable sense of hanging on around the Colts. The rain fell harder, and you could see it coming, and then it got real, real bad in a hurry. 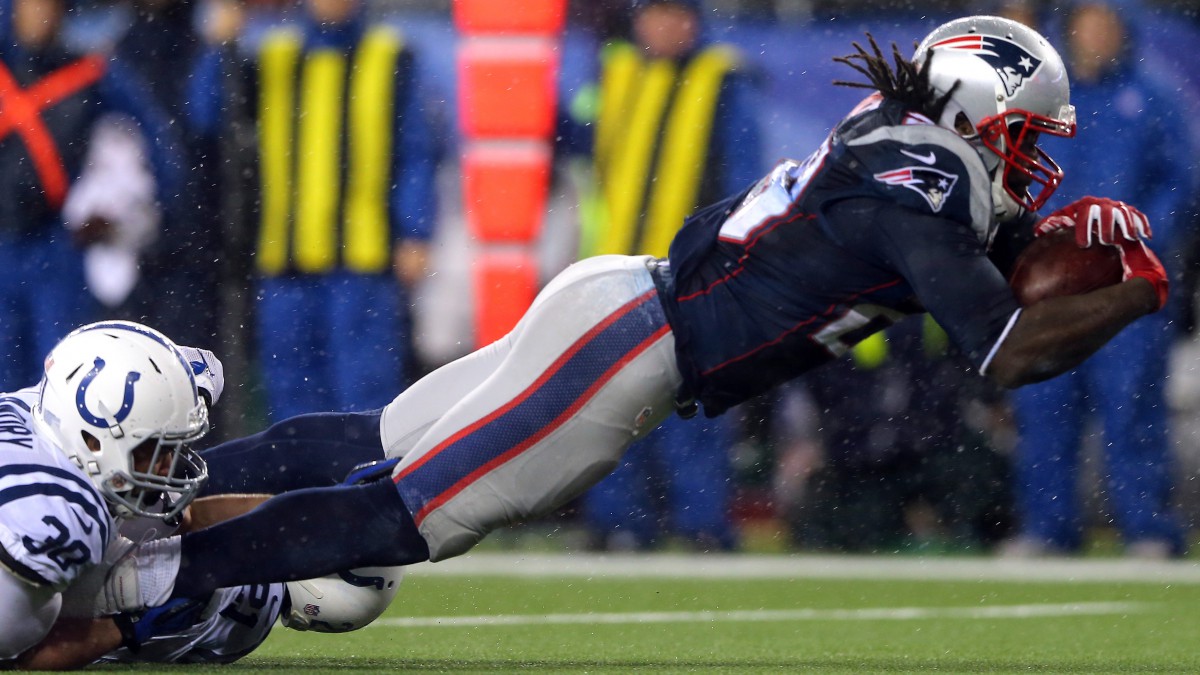 Let us leave the legacy business for another day and consider the remarkable story of LeGarrette Blount, who last night — on a night that was made for people who are 6 feet tall, weigh 250 pounds, and cut back like a NASCAR truck racer — ran for 148 yards, many of them after he’d already been hit by one Colt or another. (He at one point even gained 4 yards running backward with two Indianapolis defenders draped on him.) He scored three times. After the game, he stood in his locker with his new gray “AFC CHAMPIONS” cap on his head, the tag still prominent upon it, and told the winding tale of how he wound up back in New England.

“You get a different feeling here,” Blount said, the living definition of a slop-eating grin on his face. “You know you’re among people you can trust. You know there’s always somebody there who has your back, that there are lots of people who have your back.”

Ah, you say. Might this not always have been the case? Blount smiled again, his mouth as festooned as a Mardi Gras Indian with metaphorical canary feathers. “You’re not going to get me to say it,” he said. “It’s not going to happen.”

He has lived his career knowing that, somewhere out in file cabinets he’s never seen, there are notepads and memo sheets with his name on them, and that not all that’s written in those files is complimentary. It started when he was at Oregon. In the opening game of the 2009 season, when Blount was a senior, he flattened a Boise State player who was talking junk at him after beating the Ducks. This gained Blount not only admission to the YouTube Endless Reiteration Hall of Fame, but also a year’s suspension from the team. It also probably cost Blount a spot in the draft the following spring. He bounced around as an undrafted free agent, first with the Tennessee Titans, and then in Tampa Bay. He was traded to the Patriots in April of 2013, which is when the story really gets interesting.

Blount was a revelation in several games last year, especially against Buffalo late in the season, when he not only rushed for 189 yards from scrimmage, but also returned two kickoffs for 145 additional yards. His work with the Patriots was good enough to get him a fat two-year deal with Pittsburgh. Almost immediately, things got weird. Last August, while driving to the airport to catch the team plane to an exhibition game, Blount and sophomore running back Le’Veon Bell got popped for weed during a traffic stop. This, of course, frightened the Pittsburgh front office to death. There was a lot of anonymous whispering that Blount was not a good influence on a valuable rookie like Bell. Perhaps coincidentally, perhaps not, Blount’s playing time diminished, and his carries dwindled down to a precious few. This managed to increase the flow of bad blood in both directions. Finally, last November 17, Blount simply walked out early in a game against the Titans. Fed up, the Steelers released him, and Blount left town in a hail of anathemas and empty Iron City cans. Two days later, he re-signed with the Patriots for two years.

So if you’re keeping score at home, the LeGarrette Blount Career Path goes like this:

This is a great country. Truly, it is.

Last night, Blount goes rumbling through the mist and drear like he’d never left, and after the game, he stands in front of his locker and does not have a bad word to say about anyone, although he’s thinking of lots of bad words to say about lots of somebodies. There is an unmistakable joyful strain of hinky in LeGarrette Blount’s career at this point. If you are inclined to believe in the dark powers of Bill Belichick, you can set up all kinds of plots and machinations in your mind, and we have only two entire weeks to come up with new ones. Just don’t ask LeGarrette Blount about them. He’s not talking. He’s just grinning there, beneath his dreadlocks, and that’s another thing. Between Richard Sherman and Marshawn Lynch of the Seahawks, and Blount and Bolden on New England, this Super Bowl is going to be the greatest moment for dreads since they launched Reggae Sunsplash in Montego Bay back in 1978. I guarantee you, somebody at media day will ask a question about that, and that person may well be dressed as a carrot. You can see it coming. And you know it’s going to be weird, and then it will get real, real weird in a hurry. LeGarrette Blount should feel right at home.

This article has been updated to reflect that Le’Veon Bell played in his second year, not rookie year, this season.