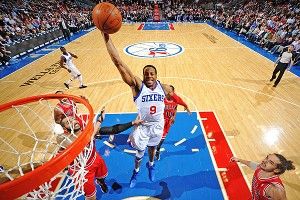 Chris Ryan: Andy! Last time I saw you it was early October, and you were in the back of a Chevy, lying in the fetal position, bleeding from your stomach (emotionally), and I was driving, trying to save you, screaming, “YOU’RE GONNA BE OK! YOU’RE GONNA BE OOKKKK!” The Phillies had just lost to the Cardinals, Ryan Howard had blown out his Achilles, and you were just a wreck.

This was followed by an Eagles season that could only be described in a very guttural Pusha T “YUCK.” All was lost. Nothing was good. And then? Then, we found love in a hopeless place: the Wells Fargo Center.

The Sixers, led by a power forward with no hops, a coach with vertigo, and maybe the best point guard east of Chicago, are taking the Eastern Conference by storm and I don’t think I’ve felt this alive since either the Friday Night Lights finale or that time Waka Flocka performed “Hard in da Paint” with a marching band:

On Wednesday night, the Sixers clotheslined the Bulls in Philadelphia. They jumped lanes, tipped passes, stroked jumpers, got into transition, and basically made the Bulls look like a one-man show. Was Chicago playing its third game in four nights? Yep. Did the Bulls look a little lost without Luol Deng and Rip Hamilton? Sure. Do I care? Not particularly!

Elton Brand had a second consecutive game of negating the opposing team’s best post player. (Carlos Boozer, you may join Dwight Howard in the waiting room. The doctor will see you shortly.) Jrue Holiday went toe-to-toe with Derrick Rose, putting up 17 points and five assists, and Lavoy Allen looked like the second coming of Kurt Thomas. On the surface, the best moment of the night was Andre Iguodala (who went absolutely hammer in this game) completely rescinding Kyle Korver’s Philly card:

But the real highlight was the bench. Ah, this bench: Thaddeus Young (19 points), Lou Williams (14 points), and Evan Turner (points are a stupid metric!). It might have been my favorite group performance by a bunch of Philly-based second-teamers since this 2001 State Property freestyle.

In a season as weird as this one, I really don’t know if this game MEANS anything. And it’s not like I ran out in the street and ripped my shirt off screaming “We the best” in my loudest DJ Khaled voice. Or at least I didn’t do it because the Sixers beat the Bulls. But what made me happiest about Wednesday night’s victory was the unspoken statement it made to the rest of league. Unspoken, that is, until Doug Collins said it.

The Sixers are about to start a brutal, season-defining stretch, playing against the Bulls (GOT THAT), Heat, Hawks, Lakers, Spurs, and Clippers. Everyone was kind of shaken that the Sixers would come back to Earth. Collins acknowledged that: “I think everyone has been waiting for when the big boys come to town. It’s been, ‘Who have you beaten?’ I’ve heard that.” But now it’s different. And Collins, honest to a fault, came out and said it. You know what other teams are thinking? “We’re gonna find out how good we are when we play against Philly.”

So what did you think, Mr. Orange? Show ya luv!

Andy Greenwald: Chris, I appreciate you bringing up Reservoir Dogs this morning. Because, in retrospect, the only surface-y, occasionally shocking, eventually disappointing psychodrama about dudes in matching clothes that I cared about more in the 1990s was the Philadelphia 76ers. In those halcyon days, when you and I were still wasting our pocket money on pricey import CDs and talking ourselves into Shyne, the local hoops team was the only game in town. (The Phillies were nearing the end of the Rico Brogna era and the Eagles were transitioning from the capillary-busting badness of the Ray Rhodes years to the Fool’s Gold Standard of the Andy Reid papacy. Juan Castillo, to his credit, had been camped out in the Jetro Lot near Veterans Stadium since 1987.) And rooting for the Sixers back then really meant rooting for Allen Iverson.

With his crossovers, cornrows, and complicated interpretations of chivalry, the little guard was polarizing to the rest of the country. But not to us. We forgave every errant pass (and criminal-trespass charge) because, on the court, Iverson was magic. Better: He was our kind of magic. His swagger, his self-centered brilliance, his constant feeling of persecution; all taken together they represented … well, not exactly “youth,” per se, but exactly what youth feels like to a couple of young dummies with chips on their shoulders and Shyne CDs in their Discmans. (Plus, legend had it that A.I. whiled away his postgame hours downing celebratory drafts with his posse at the Houlihan’s on City Line Avenue. So did we!)

Those nights at the CoreStates/First Union/Omni Consumer Products Center, watching him repeatedly run into a muscular wall of taller dudes only to hop back up again and calmly sink the foul shots, were electrifying. But they were also filled with demonstrably bad basketball. For the majority of those years, Jumaine Jones and Matt Geiger were as much spectators as we were (though I’d like to think we’d make better real estate decisions). Everybody knows how all this turned out, of course. As fans of Jeff Mangum or Barack Obama can tell you, it’s never a good idea to invest all your hopes and dreams in a single dude.

So it was disconcerting to sit in my living room Wednesday and watch — really watch — this suddenly successful Sixers team, and not because the patchy NBA TV feed made Collins look like a refugee from Skyrim. Everything was moving so quickly! The ball, the offense, even 68-year-old Tony Battie with his knees made from repurposed Brontosaurus bones was flying. (Actually, I just checked Wikipedia, and Mr. Battie is only one year our senior. I’m keeping the joke because I laugh to keep from crying.) And while the camera lingered on a frustrated Derrick Rose flinging his body around with an Iversonian recklessness, the home team’s lead kept growing. My eyes, conditioned for the dribble-dribble-CHARGE trench warfare of the iso era, flailed around for a Sixer, any Sixer, to focus on. But the reason I couldn’t tell who was responsible for the score was because it was a collective effort. (This guy knows what I’m talking about.) At one point, Elton Brand, by far the most well-known Philly player (judging by his IMDb page, anyway), slammed home an errant shot and I leaped from the couch like someone had spiked my Yuengling with L-Dopa. “Who was that?” I yelled. “Lavoy Allen!” you shouted, incorrectly. But it didn’t matter.

Look, no one knows how far this thing can go. Building a team out of selfless role players never seems to work in any medium. (It’s probably why the proposed Stephen Tobolowsky/James Rebhorn buddy comedy lingers in development hell.) But for one night at least — and it’s looking like it might be more — it was exhilarating to see a team play so cohesively, to enjoy a game in which you watched the ball, not the guy who won’t stop (bubba) chucking it. That said, it was almost a relief in the second half to see Evan Turner ignore his wingmen and dribble directly into a roadblock of red jerseys, get stripped, and then proceed to pout at midcourt like someone had just scratched his Notebook DVD.

So here’s the thing: While it might be hard to identify with a team made up of hardworking Rachel McAdams Stans — it’s difficult to imagine Holiday even listening to a rap record, let alone recording one — it’s sure as hell fun to watch. Chris, you and I know firsthand that youth is wasted on the young. But Thaddeus Young is a gift that keeps on giving.