2 Phillies Fans React to the End of the World 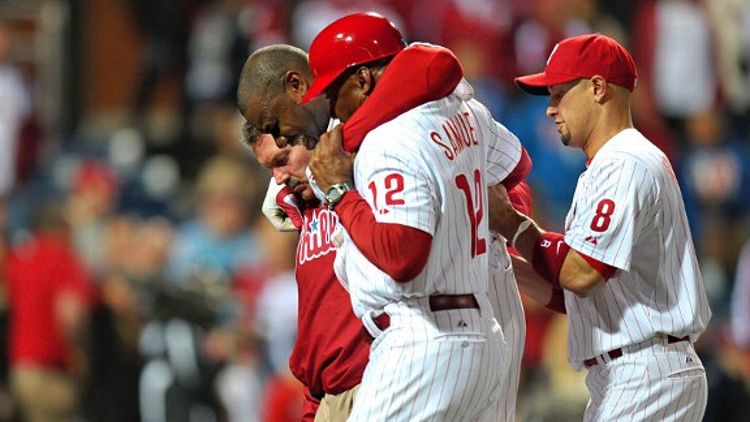 On Friday, the St. Louis Cardinals beat the Philadelphia Phillies 1-0 to win their playoff series and end not only the Phillies’ season, but also the postgame reactions of our two, alternately cocky and tortured Phillies fans, Andy Greenwald and Chris Ryan. Here they are with their (sniff) final reaction post.

Chris Ryan: I guess that’s what happens when you bring a knife to a Stratego tournament. In this series, the Phillies were put to death by a hundred dying quails, ground balls with eyes, and worked counts. And on Friday night, the fatal blow was dealt early by Skip Schumaker. Skip Schumaker — if he didn’t exist, the Cardinals would have had to invent him.

Friday night was full of pulmonary embolism-inducing moments, it’s really hard to pick just one. So I’m not going to focus on how Schumaker played the right way (right out of the game) or on Rafael Furcal’s tractor beam, which seemed to suck in every ball the Phillies made contact with, or on Chris Carpenter’s going full Hulkamaniac over the athlete formerly known as Ryan Howard’s body after the final out.

Part of me really wants to rant and rave about how much playoff baseball bites and how the accumulated effect of all of Tony La Russa’s moves and tricks made that last inning feel like the end of The Godfather (I swear, I thought I heard a voice inside my head say, “Anthony La Russa Jr., do you renounce Satan?” as Hunter Pence grounded out to third in the bottom of the ninth); like some great plan was coming together, like maybe Charlie Manuel, our lovable old coot of a manager, got fleeced. But that wasn’t it.

Part of me wants to bitch and moan about how we should have let the Braves win on the last day of the regular season. Part of me wants to cry, cry, cry about how we would have mopped up the Cards, had Pence and Placido Polanco not been in need of extreme hernia makeovers. But who knows if that would have made a difference? The Phillies were built on starting pitching and the long ball, and we brought only one half of our arsenal into the playoffs.

I think the saddest thing about Game 5, really, was how, deep down, despite how hard I was pulling for them and despite how confident I sounded in Thursday’s recap, I just felt like we didn’t have it this year. What was “it?” It’s whatever the Brewers have, I guess: wild-eyed, ride-or-die mania; that thing when a player gets an extra-base hit and then immediately turns to his own dugout and tries to psychically transmit his luck and talent to his teammates. In a word (or a hyphenated one): beast-mode.

This was an old team, and this is a kid’s game. Would Dom Brown have made a difference? Probably not, but maybe we needed just a little more youthful exuberance. For as much as I love Roy Halladay and Cliff Lee, maybe we needed a few less solitary men and little more camaraderie.

You know what? That’s bullshit. We basically had everything you need to win, we just forgot the luck.

Looking ahead, I will say I disagree with folks who are calling this the end of the Phillies run. Unless you’re replacing him with that nudist Reyes, I think we should bring back Jimmy Rollins; he’s a Philadelphia sports icon and I’d like if, for once, a Philly sports icon actually ended his career in Philly. Maybe that’s too sentimental. Maybe that’s what got the Phillies in trouble in the first place.

Anyway, buddy, until pitchers and catchers report, I sign off with this: Bad game, let’s go drink.

Andy Greenwald: There was a moment, about a half hour before the nightmare started, when I found myself pulling for the Diamondbacks. I was wedged into a corner of a Manhattan bar — not “the” Philly bar, the one across the street with the rest of the Victorino-shirted spillover crowd — trying to make the first (fourth?) beer last, and suddenly John Axford was blowing a save. “I’d rather play Arizona than the Brewers!” I said out loud, to no one (there would be a lot of that). But then I reconsidered. First of all, I probably jinxed the whole thing to hell right there. Second, would I really throw my support behind a team that needs to air-condition its stadium? That rallies behind a hand gesture from a minor Ben Stiller movie? That has a goddamn swimming pool in the outfield? No. I couldn’t do that. My grandmother was from Milwaukee, and it’s a real place with a real team and a lot of really good beer. The fans were out in force. No one deserved to have their dream taken from them like that, at home. It wouldn’t be fair.

Fairness came up a lot that evening and during the long, sleepless night that followed. Was it fair that the Phillies had buried the Braves on the greatest day of Buster Olney’s life, thus opening the door to their own doom? Was it fair that Jerry Meals’ command of the strike zone in Game 2 was as firm as my command of conversational Romanian? And, when you think about it, what was fair about a five-game playoff series specifically designed to undo the pitching advantages Ruben Amaro had diligently spent hundreds of millions of other people’s money to acquire? We demand justice! Occupy Broad Street!

But it was fair. Worse, than fair, actually: it was baseball, a game where anything can happen, until it doesn’t. This was the team to go to war with, warning track power and all. (Unfunny story: When Raul Ibañez had his un-Natural moment, lifting a ball as far as you can lift it without actually lifting it out of the yard, the entire bar jumped to its feet, blocking my view and giving me a moment of false hope. The sound of the blonde next to me in the Utley jersey screaming “Come on, Ralph!” will haunt me to my grave.) If you had told any Happ-less “first-time/long-time” on WIP the scenario — one game to play, at home, with Halladay on the mound — he would have taken it gladly and not even remembered to disparage Andy Reid’s clock-management skills in the process. The team that couldn’t score a single run in an elimination game was the same team that had tallied 102 victories over the previous six months. All season they had demonstrated a brute effectiveness and brilliant pitching but little spark. On Friday night, they looked tired and slow; beaten before the first pitch was thrown. And when the weak grounders started raining down on Nick Punto like a game of Space Invaders on syrup, it was clear where the night was going. It’s unfortunate that Halladay and Cliff Lee will go ringless for another winter, that the incandescent Jimmy Rollins may have swag surfed for the final time at Citizens Bank Park. But it was fair.

There was only one thing that wasn’t fair —what happened to Ryan Howard. Let’s be clear about something: the specialty of Philadelphia isn’t cheesesteaks (Roast Pork Italians are better anyway) and it isn’t dessert cakes of unknown derivation. It’s scapegoat, and it’s rarely served well done. Even before he ended the 2010 NLCS with his bat on his shoulder, Ryan Howard was morphing into the big swinging lightning rod for fan frustration. Now the whispers have become boos and I won’t stand for it. The guy is everything you want to root for: a homegrown talent, a grinning giant, a PR dream. His home runs make me want to punch dragons. In each of the six seasons he’s been (low-calorie) sandwiched in the middle of the Phillies order the team has had a winning record. He’s delivered, time and again.

And so the sight of him crumpled on the ground as another club celebrated on our field was cosmically unfair. He tried as hard as he could; he swung until his body gave out. We don’t pay him to take 3-0 pitches and that $125 million extension kicking in when he’s still hobbling next spring? We fans don’t pay him that either. If we don’t appreciate the greatness he’s given us, then we’re the ones who have struck out. But down he went and down went the team and with it an entire year of inflated, nervous expectations. I agree with what you said, Chris: they just didn’t have it. I wanted desperately to believe otherwise, but front-running doesn’t feel right in Philadelphia. We’re better at chasing than being chased. By the time we realized things had changed, the ground had already disappeared from underneath our feet.

Before Tony La Russa had even finished hugging Dave Duncan, I was pushing my way out of the bar like a crazy person and then sat down on the steps of an abandoned hospital in the West Village like an actual crazy person. (Seriously, there was a guy in flip-flops next to me with a shopping cart full of firewood. He had a lot of opinions about Afghanistan.) As the loss — and my new friend’s opinions on the New World Order — rang in my ears, I watched the parade of people pass by. A man in a tuxedo jacket sang Broadway songs to his girlfriend. A gaggle of guys passed around a bottle that definitely wasn’t Nantucket Nectar. A woman who may or may not have been Kelis sang along to her iPod. “Who are these people,” I thought, “and how can they be so calm?” What must it be like not to live and die with a silly team for half the year, every year? Wouldn’t it be better to be like these happy strangers, their spirits untamped by failure, their hair uncrushed by a red-billed cap and accumulating terror-sweat? Out there, on the steps, there was a Friday night still bursting with promise, not choking on defeat.

But then I flashed back to a summer filled with increasingly insane blog posts, catch phrases and pitching infielders. I remembered all the beers drank and friends made and mermaids propositioned. It was great and it was agony. It wasn’t fair. It was baseball. And I wouldn’t have traded it for anything.