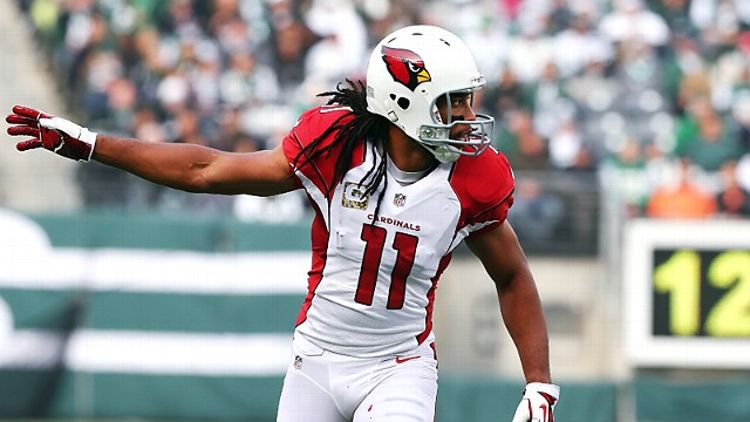 In the first quarter of the Cardinals’ Week 3 win over the Eagles last year, a few minutes after Larry Fitzgerald caught a desperation flip from Kevin Kolb that went for four yards on 3rd-and-16, this graphic popped onto the screen.

Think about this only for a second, and it makes sense. Larry Fitzgerald is one of the best wide receivers in football, and has been since he came into the league almost a decade ago. Think about it for any longer, and it makes absolutely no sense at all.

Since Fitzgerald came into the league, the Cardinals have played 144 regular-season games. For 57 of those games (and two playoff runs), Kurt Warner was the Cardinals’ starting quarterback — so we’re good there. For the other 87, Arizona trotted out a combination of — I know you think you know this list, but I promise, it’s still great every time — Josh McCown, Shaun King, John Navarre, Matt Leinart, Derek Anderson, John Skelton, Max Hall, Kevin Kolb, Ryan Lindley, and Brian Hoyer. For 60 percent of his games, this is what Larry Fitzgerald has worked with at quarterback, and still, no one younger has ever caught 700 passes. Bill Belichick thinks everyone he’s about to play is the greatest something ever, but with Fitzgerald, I think he might actually believe it.


All that brings me to this season, when the Cardinals will trot out the recently acquired Carson Palmer at quarterback. Now, Carson Palmer isn’t Kurt Warner. Hell, he’s not even Carson Palmer. But compared to Ryan Lindley, he’s John Elway. Since Warner retired, Fitzgerald hasn’t played with a quarterback who finished the season in the top 30 in DVOA. Last year, Palmer finished 18th. That may not seem like a big deal, until you realize that Fitzgerald finished the Kolb-Skelton Debacle of 2011 with more than 1,400 yards. Competency is really all that’s required here.

Palmer came out today and said that, sure, his rapport with Larry is important, but let’s not forget Andre Roberts and Michael Floyd. Actually, Carson, let’s. Because I don’t know about you, but I remember those 2009 playoffs — when Fitzgerald was probably the most exciting player in the league — pretty fondly. All we’re asking for is, like, 70 percent of that. That’s it. We’re trusting you here. Don’t let us down.