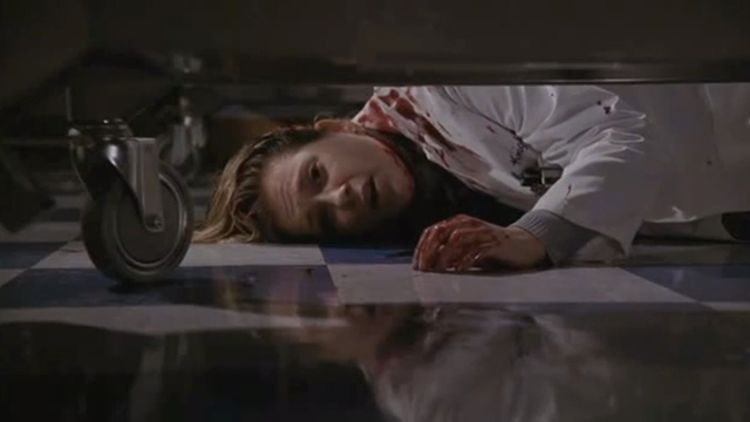 We’ve slowly begun the healing process after this week’s traumatic episode of Game of Thrones, but some cinematic wounds are deeper than others. There’s nothing like a nice, sadistic, unexpected film death to make you appreciate the ephemerality of life, especially in a world filled with psycho killers, empty elevator shafts, and brilliant sharks. Here are a collection of film and TV deaths that made us reach for the rewind button.

Charles P. Pierce: We all admire actors who are able to make a nice check while doing not very much work in silly summer movies. Well, I admire them, anyway, and nobody does it better than Samuel L. Jackson in Deep Blue Sea, a very silly movie about giant super-intelligent sharks. Sam disappears down a fishy gullet quite some time before the movie mercifully ends — and in spectacular fashion, as you see — but not before he gets to give a big speech about nature and man, and in which (I think) he is about to confess to an episode of cannibalism right before the shark eats him. If this had happened halfway through Braveheart, I’d like that movie more.

Katie Baker: With the possible exception of Teri Bauer getting offed in Season 1 of 24, I don’t think I was ever as genuinely shocked by a violent death on a TV show as I was when an otherwise normal Valentine’s Day episode of ER ended with both Lucy and Carter getting stabbed by a mentally ill patient.

The scene was set up with each reveal taking place at the last possible second: Carter is so unaware that he’s not the only person in the room that he’s still smiling at a Valentine’s Day card he found on the floor as he’s getting stabbed in the back. And it’s not until he hits the ground that he sees her: Lucy, the med student he’d spent much of the day berating, lying with a pool of blood around her neck, a victim of the same assailant. Drop jaw, blast music — oh, that music! — roll credits. (In a later episode in which Carter came face-to-face with the released-from-jail assailant, the show rather brilliantly included a callback to that unsettling Lo Fidelity tune.)

Not only was it unexpected, but this was in the days before DVR, and there was no way of rewinding to double-check what we’d just seen. There was only wide-eyed disbelief. And the show didn’t undermine the legacy of the scene with a subsequent happy ending, either. Lucy died in the next episode. Carter survived, but the episode resulted in grim story lines that would come to define his character: a painkiller addiction and a kidney problem that would ultimately require a transplant. As for the schizophrenic patient, actor David Krumholtz went to the mall the next day and “I got recognized at least five or six times from that episode,” he told the L.A. Times. “And people were actually frightened!” Mark me down as one of them.

Mark Lisanti: This one has always bothered me a little bit. Vincent Vega is a professional. This is not his first laying-in-wait-to-assassinate-a-double-crossing-boxer rodeo. A professional does not hit pause on an ambush to take a dump (with a book!), and a professional most certainly does not leave his weapon outside that bathroom. (He also probably doesn’t bring a machine gun to do a quiet job, silenced or not, but that’s like fourth down the list of gripes here.)

On the other hand, I still soil myself every time my Pop-Tarts are finished. So.

Andy Greenwald: Rosalind Shays’s express elevator to the sub-basement was TV’s original WTF moment, back in the ’80s when WTF stood for “wine cooler tacky Ferrari.” (That could be inaccurate. I was young.)

Mike Philbrick: Growing up outside of Boston, Massachusetts, you tend to watch movies set in New England in a different light — meaning, you become pretty snobby/critical about everything, from whether they say the right things (like Comm Ave. and not Commonwealth Ave.) to how they say it. There are too many terrible attempts at Boston accents in TV and movies to catalogue, but, for the record, the title for the best non-Bostonian Boston accent belongs to Julianne Moore in 30 Rock. Anyway, Martin Scorsese must have really wanted that Academy Award, because he went to the Matt Damon–Mark Wahlberg vault to ensure some authenticity. So by the time this movie was wrapping up, I had given it my tacit approval as a worthy Boston movie. Without rehashing the plot, the first time I saw this, the climax, for me, occurred when Captain Queenan (Martin Sheen) gets tossed from the top of the building, fulfilling the expectation that one of the good guys was going to die before this was over. Throw in a couple close calls between Leo DiCaprio and Damon, and then a final confrontation between the two on the rooftop. There has to be a curveball, I thought. There is! Anthony Anderson shows up with his gun drawn, but backs down as he remembers Leo from the State Police Academy. Once Leo and Matt get into the elevator and Damon admits defeat by saying “just fucking kill me,” the rest started to play out in my head. Cut to a montage … Damon in an orange jumpsuit being led to one of those jail buses … he steals a glance at the Massachusetts Capital Dome one last time … cut to Leo leaning against the wall with his arms folded while Marky Mark sits at Martin Sheen’s desk, grilling a new recruit. Something like that. Nope. The elevator doors open and boom — Leo takes one in the head from fellow rat James Badge Dale, and he’s dead, like OMG dead. I was so convinced my montage was about to happen I didn’t even react when everyone else was killed. I guess I should have known better, since Leo dies in all his moves.

Juliet Litman: As soon as Adriana met the FBI agent known as “Danielle Ciccolella,” it was over for her. Her death in Season 5’s “Long Term Parking” shouldn’t have been a surprise. But if you rooted for Adriana like I did, you wanted to believe there was a scenario in which she didn’t die. Or maybe you just watched Sopranos like Carmela lived her life — in willful denial. Either way, the loss of Adriana was brutal.

Dan Silver: I may not have been alive when Hitchcock’s Psycho was released, but I believe I can genuinely relate to the shock 1960s audiences felt when they saw the film’s literal poster girl, Janet Leigh, hot off The Vikings and Touch of Evil, slashed to death roughly 47 minutes into the 109-minute film. How? Because it had to have been akin to the horror I felt when the girl I thought could be “the one” squeezed my arm tight, leaned over, and whispered in my ear, “I can’t believe they just killed Anne Heche” after the shower scene in Gus Van Sant’s outstanding and completely necessary shot-for-shot (with the notable additions of some crucial not-so-subtle masturbation references and random shots of rolling clouds, of course) 1998 remake. Needless to say, it didn’t work out with said lass.

Emily Yoshida: I think Marilla makes one offhand remark about Matthew’s heart not being in good shape about an hour before this, the most tragical, out-of-nowhere movie scene I’d ever witnessed before age 8. Even after reading the novel twice, it still seemed so unfair to me, as it probably did to many bookish little girls with a Canada fetish, that Matthew — the nice one! — had to go before (I now realize complexly and gloriously) bitchy Marilla. Oftentimes I’d just stop watching the movie after Anne wins the Avery. But then you’d of course miss the end, with Gilbert Blythe running his hands through Anne’s hair and whispering “carrots.” Sometimes your sweet, beloved father figure has to croak so that you can get with the smartest boy in school. That’s just life.

Michael Weinreb: I hadn’t seen this since I was 5. I thought, Maybe it’s not quite as horrifying as I remember. It is.

Filed Under: Game of Thrones, Pulp Fiction, The Sopranos, Youtube Hall of Fame