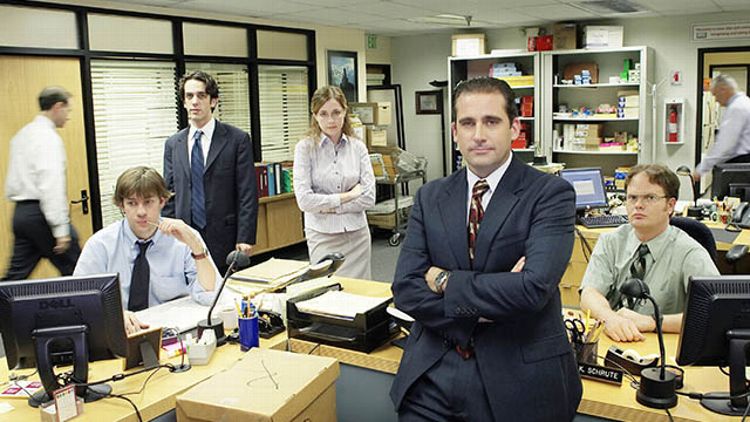 The Office’s series finale airs tomorrow night, and while it has certainly had its highs and its lows, it cannot be denied that it left behind an unforgettable legacy of cubicle parkour, Jell-Oed corporate property, and yes, true love. Here are some of the Grantland staff’s favorite highlights from its nine-season run.

Dan Silver: If you couldn’t already tell from my previous posts on this site, I take my pop culture very personally. I proudly wear my passion for my favorites on my sleeve. I also know that, despite our society’s recent wave of rampant cynicism, I’m not the only one who’s like this. We all like to get invested and occasionally have our heartstrings plucked when that investment pays off and the emotional and narrative themes of a series coalesce.

The Office has been filled with many of these moments, but none of them have resonated with me more than Jim and Pam’s wedding. (Michael’s proposal to Holly is a very, VERY close second. That scene, I might add, was directed by Steve Carell. How did this guy NEVER win an Emmy?!) Yes, it’s sappy. Yes, the Chris Brown wedding aisle dance felt a little too obvious and hackneyed. But when The Office was at its best, attributes like sappy, obvious, and hackneyed were always seen as additional bullets in the comedy chamber.

Directed by a post–Freaks and Geeks and pre-Bridesmaids Paul Feig, Jim and Pam’s wedding episode contained everything an Office fan could ask for: awkward Michael moments, adorable silent Jim and Pam exchanges (with some of the best John Krasinski mugs in series history), and brief showcases for each of the show’s stellar supporting cast members. But there are two bits in this scene that make this one of the most memorable in series history.

I’m sincerely looking forward to shedding a few tears tomorrow night when it’s all over. (“That’s what she said!”) And despite a few rocky post-Michael years, The Office will always sit alongside Arrested Development, Spaced, and yes, the British Office as my favorite TV shows of all time.

Now can we at least get a Michael cameo!?

“Why are you the way that you are? Honestly, every time I try to do something fun or exciting, you make it not that way. I hate so much about the things that you choose to be.”

A rock with a SUCK ON THIS note rubber-banded to it.

Michael checking Toby into the boards at the ice rink also speaks volumes.

They were The Office’s water and oil, its matter and antimatter. But they were also its chocolate and peanut butter, ingredients that the universe once conspired to keep apart; once combined by the alchemy of happy accidents, they remained deliciously intertwined forever.

Jim vs. Dwight may have lasted longer.

But Michael vs. Toby burned hotter.

Megan Creydt: “Initiation” was one of the highlights of the series for me. There was this amazing pre-credits scene, the insanity of Ryan’s sales-call hazing at the hands of Dwight (“Ryan, just get in the coffin”), Pam following Jan’s directive to monitor Michael’s accomplishments of the day (“Cosby impression,” “stood in pretzel line”), and then the episode ending with an after-hours phone call from Jim (stationed at the Stamford office at the time). His and Pam’s conversation is funny, intimate, giddy — the perfect representation of those early conversations with a crush, when you can’t believe how well things are going and are terrified of the inevitable moment when the conversation falters (in this case, when Jim misinterprets Pam’s “OK, bye!” to Dwight and Ryan). I was nervous for them as I watched it, and thrilled at all that call implied for the Jim-Pam story line. God, The Office was great. Forget the post-Michael stumblings — I’m grateful this show existed, and that I can selectively watch episodes like this one for years to come.

Sean Fennessey: Yes, the last few seasons of The Office have been baggy, aimless, and ultimately a syndication-suck for NBC and Ben Silverman. But the dwindling number of episode premises have resulted in some fun meta tricks. Take, for example, “Moving On” from just this past February, in which Pam’s search for a new life and a job in Philadelphia leads her to the local branch of Dunder Mifflin. There she encounters potential future boss Mark, played by the great Bob Odenkirk. Mark is basically Michael Scott South — all forced pop-culture references, amirite?! call-and-response joke delivery, and sensible side-part. It’s a delightful little in-joke from the producers. Odenkirk was originally tabbed for Steve Carell’s role, and this is a sneaky-great preview of what that would been like: a little less friendly, a little more venal, a little more rage boiling beneath the surface. The Office probably wouldn’t have reached 200 episodes if Odenkirk filled Michael’s Men’s Wearhouse wardrobe. But I suspect I’d have liked that show more.

Dan Fierman: The strength of The Office was in outlying characters. None was stronger than Mose.

“Are You Free for Dinner Tonight?”

Andy Greenwald: There are plenty of thoughts on The Office‘s finest moments in my column today — and even more thoughts on its worst. So let me just chime in to say that the show was never better than it was in the final 30 seconds of Season 3, when Jim finally asked Pam out on a date and she flashed a 1.21-gigawatt smile that could’ve powered Northeastern Pennsylvania for a month. Sometimes the greatest scripted moments are silent. And sometimes the best comedies don’t have to be funny at all.

Patricia Lee: I remember when parkour first started becoming popular, and a couple of friends and I would just run around, kick off of walls, do random jumps in the air while grabbing imaginary skateboards, and cartwheel (or at least attempt to cartwheel) through the grass. “Parkour” (in quotes because what we were doing definitely wasn’t) always seemed badass for about five seconds before we realized that we were just a bunch of kids running around like maniacs, not suave-looking athletes doing backflips and triple jumps and all that incredible stuff.

Michael, Dwight, and Andy? They’re definitely in my boat; they look like maniacs — “PARKOUR”-yelling maniacs because YOLO (just kidding, FALSE). They’re maniacs who knock down lamps and play leapfrog, similarly maniacal, really, to the guy who traps stuff in Jell-O.

So good-bye, Michael, Dwight, Andy (and you, too, Jim). And if there’s one last thing I’ll never forget from this show, it’ll be a nugget of wisdom from Kevin: that the Swedish Chef lives on Sesame Street (dumb-ass).

Emily Yoshida: I’ve been debating whether or not I’ll start getting into basketball next year, and the one main argument against that idea is that I’m pretty sure nobody in the NBA dribbles like Stanley.

Filed Under: Comedy, NBC, The office, Youtube Hall of Fame