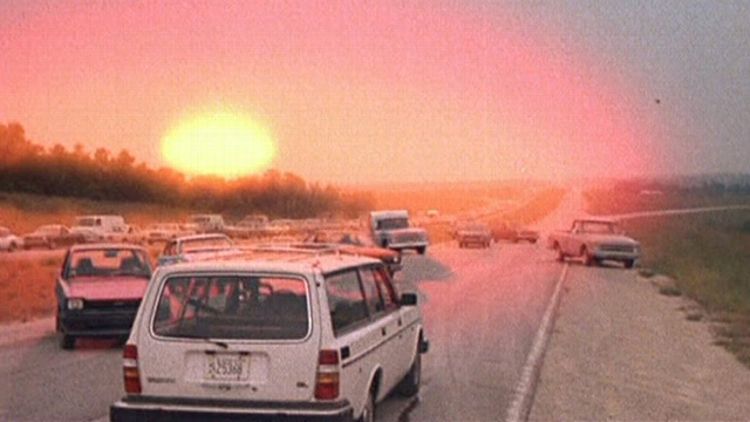 Some say the world will end in fire, some say in ice, some say with Ben Affleck playing an angel. To complement this weekend’s release of Seth Rogen’s stoner apocalypse comedy, This Is the End, as well as the rest of the summer movie season, the HOF is revisiting some of the best end-of-world scenarios from film and TV.

netw3rk: The instructions were to write about our favorite end-of-the-world scenarios from TV or the movies. I can’t say The Day After is my favorite, but it’s probably my first encounter with the concept of human life on Earth skidding into the wall. For sure, it’s the scariest, because however old I was when I saw this, it was before I had become conscious of how to discriminate between fictional stuff on television and, like, the evening news. If it wasn’t cartoons, it all vaguely seemed to be the same kinda real thing. I remember nothing of the plot. I may or may not have recognized Steve Guttenberg. What really made an impression was the split-second photographic-negative-looking skeletons, black as a nightmare, of the people being vaporized in thunderous nuclear explosions overcapped by orange mushroom clouds. Later, someone — a teacher, perhaps, or a newscaster, some adult figure — put it into my head that since I lived close to New York City, I’d be vaporized and wouldn’t have to worry because I wouldn’t even know it happened. Maybe this is where my fondness for postapocalyptic fiction came from.

Night of the Comet

Mark Lisanti: “Did you ever wonder what it would be like to be one of the last people on Earth? Who would you see? What would you do? Where would you go? Well, get ready to find out, because the comet is coming into your orbit!”

BTW, the comet wipes out everybody on the planet. Bummer! Except for some teenagers who just want to par-tay! Sweet! Comet-death jammy jam 1984!

The Girl From Tomorrow: Tomorrow’s End, “The Great Disaster Begins”

Emily Yoshida: This is the penultimate episode of the early ’90s Australian time-travel soap The Girl From Tomorrow, which I was absolutely obsessed with during its original run (I think it aired on the Canadian channel? Clearly I was a big fan), and which I just discovered is available to watch in its entirety on YouTube. I fully intend to go back and watch them all soon (especially the Series 2 premiere, “A Time Without Vegemite”), but in the meantime I’m pretty foggy on the plot — other than the fact that some evil folks from the future have captured Year 3000 native Alanna and her sassy present-day friend Jenny, they intend to destroy the world, and obviously they’re starting with Queensland. (In all seriousness, though, that map is one of the few things I remember vividly from this show, and I think it made me, at a very early age, highly aware of North American centrism in science fiction.)

Dan Silver: “Try to imagine all life as you know it stopping instantaneously and every molecule in your body exploding at the speed of light.” Or more simply put, total protonic reversal. But I’d like to think of crossing the streams as the concept that led to the epidemic of pee splatters on countless middle school boys’ bathroom and locker-room floors circa 1984.

The Twilight Zone, “The Midnight Sun”

Tess Lynch: The best post-apocalyptic Twilight Zone is “Time Enough at Last,” but I like the fact that “The Midnight Sun” lingers on the moment before the world dies under a broiler (SPOILER ALERT: or in the deep freeze! So much worse, so much less languid). Some out-there conspiracy theorists think it predicted 9/11, but the really spooky intel on “The Midnight Sun” is that it was shot on a heated set in the middle of summer. The Twilight Zone was suffering budget problems, and you know how expensive fake sweat/prop heat fear can be.

Chris Ryan: Really bad reaction time on the part of the tourists watching THE COLISEUM GLOW WITH ELECTRIC STORM LIGHT BEFORE EXPLODING. Keep your head on a swivel!

Sean Fennessey: Just a healthy reminder that the premise of Kevin Smith’s fourth movie concerns two fallen angels played by Ben Affleck and Matt Damon who plot to kill something called the Last Scion (?) played by Linda Fiorentino (??), thus unfurling a biblical end of days. This has not aged well, but I will admit a weakness for Affleck doing Smith line readings. Quentin Tarantino always cites Samuel L. Jackson as the model for delivering his dialogue. When Tarantino says that, it sort of sounds like Q.T. wishes he were Sam. I sense a similar connection between Smith and Affleck, especially with all the cursing G_d and stymied white male privilege. Only Affleck could make an angel seem this pissy.

Brian Phillips: “Oh, hey, honey, it’s me. Just gonna stop on the way home for a gallon of space-milk, secure in the knowledge that there’s not an unfathomably massive battle station out there about to test its new planet-destroying death ray on us without any warning whatsoever, all due to an attempted political manipulation we can neither see nor understand! Boy, that’s a relief, huh? Hey, did you want me to pick up a case of —”

Bryan Curtis: So the world doesn’t end, exactly, in The Pink Panther Strikes Again (1976). But I used to have the videotape, and it was the most apocalyptic thing in my collection. The scenario: Jacques Clouseau (Peter Sellers) succeeds in driving his boss (Herbert Lom) completely mad. Lom acquires a doomsday device. If memory serves, he zaps the U.N. Building and plays the organ in evil-mastermind style. But the slender purpose for this item is to get you to watch the joke above. It’s corny. It could have come out of a joke book. But it … works, no? This is what we did before Seth Rogen, kids!

Dr. Strangelove or: How I Learned to Stop Worrying and Love the Bomb

Filed Under: Star Wars, This Is the End, Youtube Hall of Fame

The New Gods vs. the Old: Is Game of Thrones Better As a Show or a Series of Books?