You're Next, The Strangers, and Understanding the Rise of the Home-Invasion Horror Movie 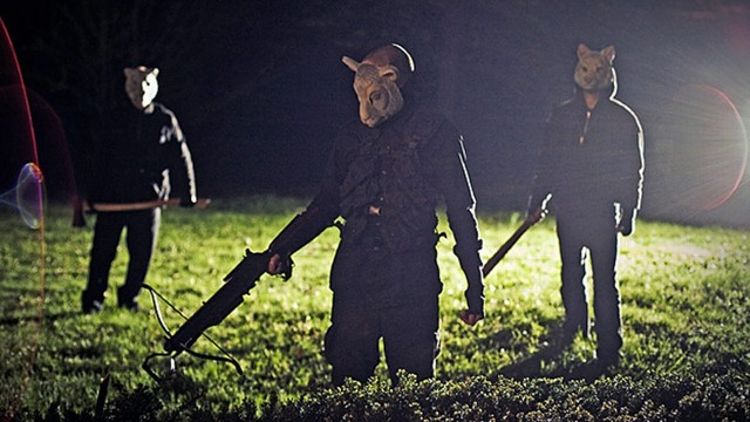 There is nothing scarier than a home-invasion movie. Nothing. Especially for adults, who deal with minor home invasions on a daily basis (ants, the spooky kind of telemarketer who gets aggressive or digs your address out of the public records to creep you out, bats, flies, an object that you swore you put on the nightstand that suddenly appears on the dresser), intruders are a practical threat. A person can teach herself to outgrow a genuine fear of zombies, vampires, and monsters — it’s easy, because they aren’t real. And revenge murderers are easy to avoid, if you can manage to live your life without pissing anyone off (hard, but not impossible). You feel safe in your house, and it never occurs to you how dumb this is until you’re forced to admit that privacy is an easily destructible myth, and that all “home” is is glass, concrete, and stone. Nothing is impermeable and, in a way, being confined in a mundane space is like being a fish in a barrel.

This weekend’s opening of You’re Next, written by Simon Barrett and directed by Adam Wingard (both of V/H/S 1 and 2 and A Horrible Way to Die), might force us to reconsider the potency of the dead bolt. One of the marks of a good invasion movie is how domestic dynamics, in this case a bickering family, play into the scares. Paranoia, sometimes a justified strain of it, is exactly what morphs the ordinary into the terrifying: An innocuous ’70s song called “Lookin’ for the Magic” by the Dwight Twilley Band plays throughout You’re Next, as if to make it as comfortably recognizable to you as the things, sounds, and images you see every day in your own environment just as it simultaneously becomes the most foreboding siren ever. The message seems to be that you can’t trust anyone, or anything, a point that was played with by this year’s The Purge and that’s easily interpreted as both personal and political. Of course, paranoia is older than we are; it finds its footholds in our fright center cyclically, burrowing out of the dirt like a horde of cicadas just when we check our watches and realize that it’s time to start worrying that we’re being spied on. Currently, we’re concerned with our e-mails and phone calls, two of our most vulnerable outlets. A breach of technological trust is as damaging psychologically as a masked assailant hiding behind a shower curtain when we’re naked and just about to step into the shower, just as unexpected as waking up to find a stranger looming above you in the dark.

You’re Next reminds me a bit of The Strangers, written/directed by Bryan Bertino and released after a delay in 2008 (like You’re Next, which has marched to theaters to a slow drum roll following its debut at the 2011 Toronto Film Festival and subsequent acquisition by Lionsgate), though You’re Next packs more violence into the first half hour than The Strangers does in its entire run. The Strangers well exceeded box office expectations — shot on a $9 million budget, it grossed more than $82 million worldwide. The Purge was a similar success, raking in more than $81 million on a $3 million budget (and it’ll be interesting to see how You’re Next fares, with a budget rumored to be less than $1 million), though The Purge committed the sin of beating audiences over the head with a concept that’s already spelled out in its premise. The Purge lassoed a marketable and exciting idea — the “purge” itself, an annual 12-hour period during which acts of mayhem would go unpunished as a way to vent societal aggression — that sounded much better than it was in its execution. It spoiled the fun of the slow reveal, the gradual fade from normalcy to shadowy thrillertown. You knew exactly what you were in for, so there was no room to exploit complacency and that moment when the victim realizes that the clatter coming from the kitchen isn’t just the oven working itself up to 425.

The Strangers, on the other hand, might be the most suspenseful home-invasion movie of the decade, hooking you immediately with a half-truth that it was based on real events when it was actually a blown-up collage of an almost-break-in suffered by Bertino in his childhood, the Manson family, and the Keddie murders of 1981. It’s a dead-serious take that I’m sure you could compare to Scream in your cinema studies paper on pre- and post-9/11 horror angles; your thesis is that what we once feared in an abstract way, as some kind of very rare possibility, we now dread as though it’s practically inevitable. Toss in a paragraph about Homeland Security for extra credit, and make sure you hook them with a powerful epigram involving the word “innocence.” The Strangers, which stars Liv Tyler (as Kristen) and Felicity’s best boyfriend Scott Speedman (as James), takes place in a country home (as do Funny Games and You’re Next — country homes are just familiar enough to contain bits of your personal history along with layouts you’re not totally comfortable with and neighbors who don’t care if you scream) belonging to James’s parents. It’s a ’70s ranch outfitted with tons of knickknacks — a height chart on the wall, plastic dish racks, afghans aplenty — to double-cast it in the roles of comfy and claustrophobic. Retro lurks everywhere, chilling you the disco way with chiffon nightgowns and records spinning on the turntable. The invisible DJ alternates between Merle Haggard and Joanna Newsom, and yeah, DJ Deep Reads, I’m going to call you out on the fact that I think you’re asking Kristen and James, “Hey, guys, didn’t history already teach you two that ’60s suburban idealism was an easily shattered illusion? Like, hello? Mansons? Vietnam? This folk music is not going to keep a cadre of sadists in doll masks out of your love shack!”

There should always be a love shack if you’re going to see an invasion. It doesn’t have to be romantic — Panic Room features Jodie Foster as a single mother; Funny Games is a threefer plus a dog — but it has to be something resembling a unit, something that has relationships to be toyed with. The Strangers opens on a wedding proposal gone awry, and spends a longer than average amount of time (certainly longer than You’re Next, though that’s neither good nor bad) establishing the relationship between its protagonists before the violence begins, and it’s not a straightforward relationship by any means. They arrive at the rural property after a tearful, silent car ride and walk glumly into a house strewn with rose petals, champagne, and candles waiting to be lit. It’s domestic and romantic fantasy contrasted with reality, the nasty fights and unresolved dilemmas that hang out in the corners of every room that resist Pledge and 360-degree dusters. The problems within a home can be categorized as what everyone sees, what you see, and what no one can see: You know that the floor is sticky by the door, and that the mark on the wall is from when you threw a vase at your wife, and where the smoke detector always is.

These are the specifications of the familiar, the objects that wear the sheen of your past and look almost like representations of yourself — the least scary thing. To pervert those symbols is ghastly, and the fact that we only ever see the assailants in The Strangers as masked figures, including Gemma Ward as a freaky doll, is frightening because it reminds us of how frustrating it is to acknowledge the existence of things that are unknowable. Safety and comfort are lies, but we’re not wired to believe it, and never will be. Consider the bedbug, a home invader continues to plague us today and potentially inform our current fascination with malevolent strangers creeping all up in our business. They hide in mattresses, waiting for you to succumb to the inevitable need to shut off before they start snacking on your blood. In these films, there’s always a moment when a protagonist approaches a window and sees something horrible scrawled on the glass or quickly vanishing from view. It’s the point at which you realize that the scary outside is only separated from the womblike inside by a slab of slate, a stack of bricks, some drywall. The scares permeate those materials easily, slipping in and waiting for dark, listening for your sigh of relief when you shut the door. There’s no getting rid of this kind of fear, no way to shake off how unsettling it is to confront a violation of an intimate space. Goodnight, sleep tight, and don’t let the bedbugs bite.

Video on Demand Report: The Exceedingly Average Epic Is Here To Babysit Your Kids