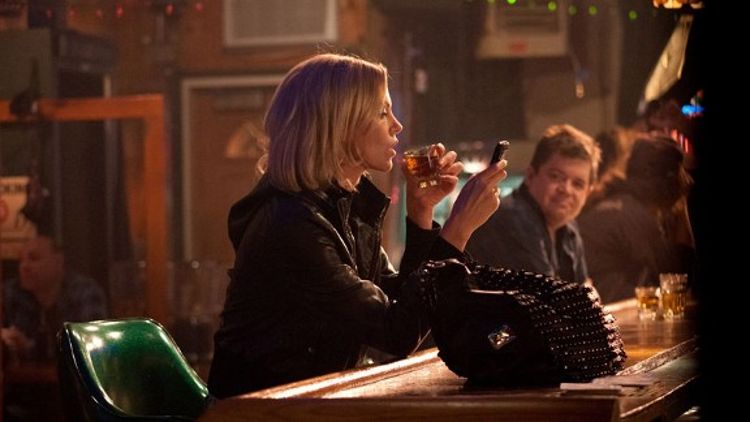 The Diablo Cody penned, Jason Reitman directed, and Charlize Theron illuminated film Young Adult opened in limited release last week. If you haven’t seen trailers or reviews yet the movie is a dark somewhat-romantic comedy, and its conceit is a story that follows the typical Hollywood rom-com beats with the twist that the main character we usually lovelovelove is an unchanging abomination of a human being. (This is not unlike Noah Baumbach’s Greenberg and Judd Apatow’s Funny People, which suggests an emerging trend in Hollywood might be “unlikable is the new likable”). Can you deal with an unlikable lead? Is that concept exciting, or exhausting? Your answer probably determines whether you’ll like this movie or not. It’s a good movie, but it’s not a commercial slam dunk — mostly because a ninety minute staring contest that never blinks or winks, daring you to empathize with Theron’s bitchy Mavis Geary character. If you appreciate the integrity of a film with backbone not kowtowing to Hollywood formulas, you’ll look at it more favorably. But if you don’t particularly enjoy a film that uncomfortably stares you down (even if it’s Charlize Theron doing the eyeballing) while you cross your heart and pray for escapism, then you’ll probably file a complaint and/or deduct some points on Rotten Tomatoes.

While you’re doing that, here are our grades on the five main young adults in “Young Adult”:

Charlize scores high marks for her unreserved commitment to being an A-list bitch of a character. Theron got her Oscar for uglying herself up in Monster, and she does just as thorough a job here by uglying up the insides of a broken-down and psychotic-depressive young adult author/ghostwriter. At times there seems to be too much natural beauty and gravitas for a role designed to have as little dignity as possible — Julia Roberts in My Best Friend’s Wedding seems the closest big star take on this kind of character, but Roberts balanced all that darkness with her irrepressible smiling charm. Theron chokes or sneers or swills all those affectionate flourishes out of her performance — but ultimately, like a “Julia”, maybe she’s become too “Charlize” for a role like this.
Grade: B

A just about perfect performance. The doughy dork role is well-suited for the brilliant stand-up, but his Matt Freehauf conveys depth in small dosages, while serving as the clear-eyed straight man the audience can relate to. Oswalt also gets the permanent memory of wrapping his naked body around Charlize Theron. Peak moment!
Grade: A

A few years ago I remember coming out of the movie Hard Candy and thinking both Ellen Page and Patrick Wilson were going places. Page has broken out since, but I haven’t seen the same from Wilson. His role in this film is mostly limited to being hot enough to lust after and being a good loyal husband and father. So maybe not the time to judge his overall street cred as an actor. But in Juno and Up in the Air there were awesome supporting performances, and I don’t think Charlize and Patton get the help they need in this one.
Grade: C-

I think this could well be a film we look back at and say, “Cody matured with this one.” Yeah, she uses some of the same tropes, but she added new wrinkles, took a different angle, toned down the jazz hands a bit. And the more I read about Cody writing this script as her therapeutic exercise to deal with her own status and celebrity, the more I like it. If she takes the chance to now fly off and do something entirely different then I think Juno, Jennifer’s Body and Young Adult is a nice teen-trilogy for her oeeeeuuuuuvre. And hey, she has an oeeeeuuuuuvre now, and that’s saying something.
Grade: B+

This also rounds out his resumé nicely. I think it establishes a filmic sensibility we can call “Reitmanesque”: a fun but simple and straightforward telling of the facts (or story), as opposed to the meta-fiction of a Charlie Kaufman, the razzle-dazzle of a Christopher Nolan or the darkness of David Fincher. He hasn’t quite hit the sweet spot yet, but this is progress on a road that seems more than promising.
Grade: B+

More from Patrice Evans: The Problem With Mac Lethal’s Pancake Rap Video
Another One: Beyoncé’s “Dance For You” Video
The Top Ten Drake Memes