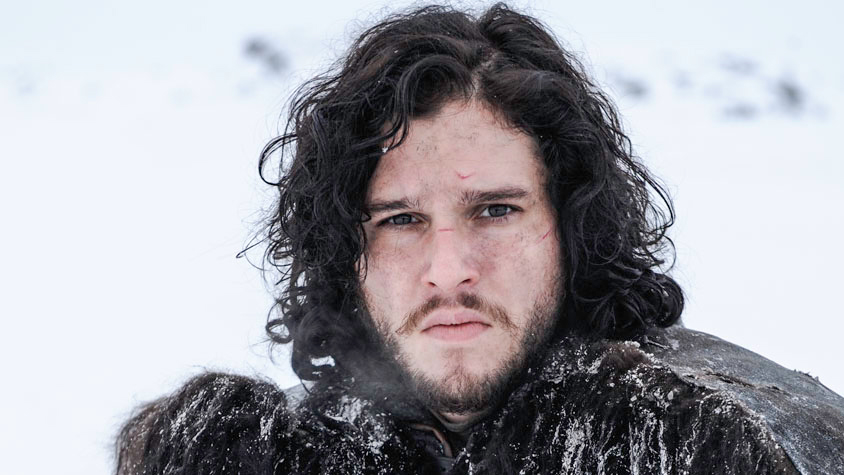 Jon Snow is a pretty bastard. This is easily the funniest thing about Game of Thrones’s treatment of the Lord Commander of the Night’s Watch — a constant riff that extends throughout his time at the all-dude Castle Black. Jon Snow’s prettier than the women north of the Wall, his comrades joke, or, as Craster once remarked, he’s prettier than Craster’s wives. It’s the one constant througout Jon’s journey, as he goes from ninny sad-boy to undercover cop to fantasy Sun Tzu to Night’s Watch Lord Commander. He might be respected or disrespected, trusted or mistrusted, but he’s still a good-looking guy.

For a while, being pretty was the main thing Kit Harington did. Harington took the role of Jon Snow when he was 24, with only stage roles to his name. Here is a photo of Harington and the rest of the Game of Thrones principals prior to shooting, many years and deaths and body parts ago. (Oh, Alfie Allen. You were so innocent then.) Harington is descended from British nobility, in that convoluted and obtuse way you can’t possibly understand unless you were born and raised in England. If he didn’t become an actor, he would’ve been a journalist, maybe a war correspondent: My man chose the right path.

In the show’s first couple of seasons, Jon Snow was not a particularly well-liked character. He moped. He whined. He had very rigid ideas about “honor” and “loyalty” that, in the orgiastic royal rumble of early GoT, were more or less just a buzzkill. If Game of Thrones was a party, Jon was the kid who stood in the kitchen, holding a Solo cup but not drinking from it, worried that the music was too loud, and also, do we really have to listen to more hip-hop? He’s got Interpol’s first album in his car, he could totally run out and get it.

And the actor didn’t always help the character. Although he might not have had much to work with, Harington was responsible for his character’s early listlessness. To compensate for the show’s extreme depravity and sadness, many Game of Thrones cast members became virtuosos of camp; others leaned in hard to whatever made their characters unique, whether it was Tyrion’s wit, Jaime’s arrogance, Cersei’s ferocity, or Tywin’s menace-power. (And that’s just the Lannisters!) As Jon, Harington didn’t seem to quite yet have a “thing.” On a show filled with dynamite performances, Harington’s was safe, basic. He fell behind the other actors in terms of recognition and admiration; he became a supporting player, despite the considerable amount of screen time and attention that the show lavished on him.

Game of Thrones has been on for five years. It has changed in tone and scope multiple times over the course of those years, morphing from a politically sophisticated fantasy epic to a gritty war drama to … whatever the hell that Season 5 finale was. The point is this: One of the beautiful things about a television show is that it can evolve. Few artistic endeavors are allowed to change over years.

This is why television can be the perfect farm league for actors. Over the course of his five seasons, Harington became one of the best things about Game of Thrones. He learned how to use Jon’s earnest longing and puppy-eyed sense of duty to the character’s advantage rather than detriment, playing him as an increasingly aberrational version of competence and honor in an increasingly nihilistic world. Considering how young he was when the show began, this wasn’t so much a surprise as it was a happy development.

At the same time, Harington’s career outside of GoT has undergone a similar escalation. His first big-screen roles were … underwhelming, to put it kindly. Like his trajectory on Thrones, Harington needed a few tries to get warmed up: Silent Hill: Revelation 3D, Pompeii, and Seventh Son are hardly the kind of movies that get you short-listed to play Steve Jobs, or whatever young actors have to look forward to these days. Because I’m not a masochist, I’ve never seen any of these — average Tomatometer: 15 percent. 15 percent!!!!! — but our own Wesley Morris did, and he described Harington in Pompeii as having “a face that says ‘Eric Bana,’ a teased, swept-over wet look that says Purple Rain, and a way with horses that says, ‘Mount me.’” In the midst of this blockbustering, Harington did get a little time with How to Train Your Dragon 2, a legitimately good movie, but voice-over work can’t atone for the sins of a Seventh Son.

Even with this rocky start, though, it didn’t take Harington long to find a role he could shine in. Testament of Youth is a British film that takes place at the onset of World War I, the country in jingoistic heat, Alicia Vikander’s Vera Brittain trying to find her place in a world in which women are still thought of as the male equivalent of handbags. She meets Roland Leighton, played by Harington, a friend of her brother’s; they share writerly aspirations and hot, hot chemistry. The two fall in love, etc., etc. It’s a good movie, especially if you like period pieces that look like Impressionist paintings and are really, really sad.

What makes Testament of Youth notable, beyond its own merits and the fact that it marks the latest step in Vikander’s world-conquering ascent, is how well Harington plays his part. Looking like Vampire Weekend’s Ezra Koenig and acting like Jack O’Connell’s sensitive brother, Harington handles empathy, cockiness, charm, and horror with flexibility and skill. While there are some shared traits between Roland and Jon Snow — they both have good hearts, nice hair, and noble leanings — Roland’s a far more fearful and delicate character, and Harington shows some finesse in playing him.

It’s not hard to imagine that he could have a long career playing both sides of the British leading-man coin: charming rogue and thoughtful lover. I think we might be surprised at how easy it is for Harington to ditch Jon Snow when the time comes, for two straightforward reasons: He’s surprisingly versatile, and when he cuts his hair, he looks like a different person than he does as a man in black. While he still might not have the insouciance of a Bond, I think he could have Colin Firth range, shuttling between more intense, high-pitched roles and lighter, breezier fare.

Which brings us back to Game of Thrones. Starting with his infiltration of the wildlings, which included one of the show’s most enduring and iconic lines — “You know nothing, Jon Snow” — Harington became Game of Thrones’s emotional core, starring in one of its most compelling and coherent story lines. The curveball of Season 5’s finale was disappointing not only for how inert it felt in the context of the episode, but also because of what it might mean for Harington’s involvement. He had turned Jon Snow from a confused tragedy into a charismatic, thoughtful, and dynamic protagonist. Fortunately, with roles coming in a Xavier Dolan movie — opposite Jessica Chastain! You’ve made it, boy — and a weirdo HBO tennis mockumentary costarring Andy Samberg, losing Game of Thrones might just allow Harington to fully commit to the next stage of his promising career.