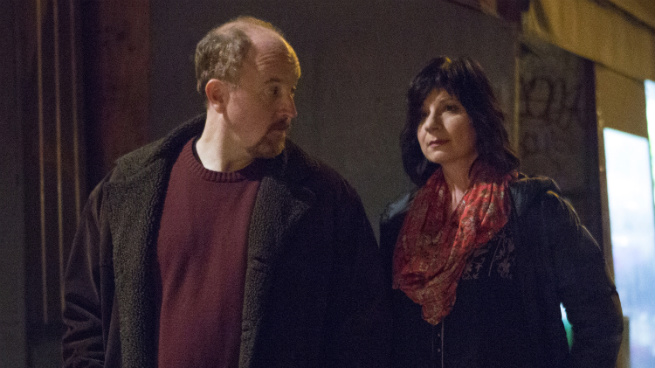 The one thing Louie does better than anything else on TV is consistently surprise us. A romantic evening with Melissa Leo ends in sexual assault; a duckling stows away to Afghanistan; Parker Posey’s personality does loop-de-loops for the duration of an episode. You genuinely never know what Louis C.K. will give you on this show. That said, installments 4 and 5 of C.K.’s sneaky six-part TV movie were, more than any episodes in a long while, a nonstop stream of what-the-fuckery. Consider:

1: Louie screaming out a skyscraper window during a therapy session, only for it to go totally unacknowledged when he steps back into the room.

2: Cuba being sunk by Hurricane Jasmine Forsythe. Is a fancily titled storm coming to Day After Tomorrow the end of this TV movie? Chekhov’s hurricane?

3: C.K., in the elevator, raising his already high bar for parenting-anger stand-up by suggesting he and Janet just “pay to have Jane killed.”

4: C.K. trying to pass himself off as a natural cigarette smoker.

5: The insanely different flashback versions of Louie and Janet. One couldn’t look or be less like Louie, and one is suddenly Caucasian.

6: Seeing a divorce unfold before our eyes, and not in a big fireworks-fight way. Simply a calm, reasonable team decision. Which will soon be nullified by a pregnancy. And then another one.

7: That 30-second round of sexual intercourse. And that it’s the best sex Young Louie and Young Janet have ever had. Oof.

9: LeBron James’s life being claimed in the ceaseless violence of Hurricane Jasmine Forsythe. (Also dead: millions of Floridians, the rest of the Miami Heat. Keep the focus on LeBron, though, people.)

10: Todd Barry’s single-dude life story. And this guy that’s in it.

13: The push/pull when Louie put the moves on Amia. Maybe it’s supposed to come across as romantic or as an authentic depiction of when two people want to have sex but know they maybe shouldn’t, but it also feels incredibly uncomfortable and pressured.

14: The morning after. Is it dramatic, with Amia telegraphing that she’s feeling too strongly about Louie and it’s “no good,” since she’s leaving? Or was there just zero sexual chemistry radiating between Hungary’s cutest and our favorite chubby redhead? Don’t forget how terrible Young Louie was at sex …

'Ill Communication' at 20: An Everything Guide to the Beastie Boys Masterpiece