Wolfing Down Eli Roth’s Hemlock Grove in a Single Weekend 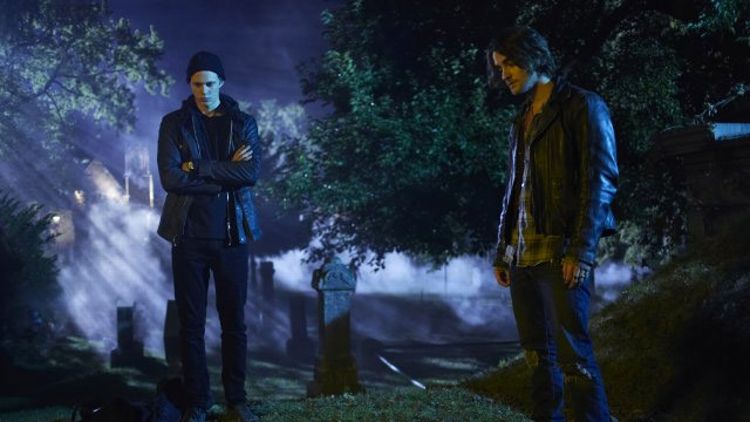 Before settling in for a weekend spent watching Hemlock Grove, I read the New York Times’s lukewarm review, which called it “a hybrid of Twin Peaks … and CW teenage gothic” before going on to refer to its pace as pokey. This did not bode well, and I wandered into the Grove with adjusted expectations. Prior to reading the review, which was actually one of the more generous accounts of Hemlock Grove, I was psyching myself up for a highly enjoyable experience: how much would I have loved to permanently disfigure my sofa with my body’s imprint after a zillion hours spent consuming American Horror Story all at once? So much! How good was that teaser of the werewolf transformation? Pretty good! How long ago did Eli Roth’s Hostel: Part II come out? Long enough that we’re over it now!

Netflix’s strategy for releasing its original programming has what sometimes feels like a psychologically mysterious allure, like ordering a 14-course media tasting menu from room service: There’s just so much of it, and you’re in control of dispensing it. It reloads itself until you beg it to stop. You can be rational and mete it out, but you aren’t really supposed to be; you’re supposed to geek out and become a zombified fan in one long, hard-won weekend. It begs you to be bad, hits your pleasure and guilt centers at once, and makes you stay up past your bedtime. You can see it as a challenge, a shared cultural event in which you talk about Zoe Barnes the next day with someone who was as glued to House of Cards as you were the night before. Committing to a viewing marathon like this requires a certain level of excitement and anticipation, so maybe it’s not surprising that most of the folks who hunkered down to watch Hemlock Grove this weekend, reviewers and civilians alike, felt varying levels of disappointment along with their TV-hangover aching eyeballs. To work, it had to be addictive, otherwise it was an exercise in masochistic punishment. Maybe somebody in charge assumed that Netflix’s compulsory-watching model was conducive enough to keeping viewers riveted that they’d forgive sincerely delivered lines like “How do you explain dancing to a person with no legs?” or accents that float in and out on mysterious breezes. It’s not.

Twin Peaks was ambitious. It was surreal in a way that gambled with marketability (and, unfortunately, lost when ABC put it on hiatus in the second season), and boy am I jealous of the people in an alternate universe who are just now sitting down to watch this new show Twin Peaks in one long stream on Netflix. Louie, Girls, Lost, American Horror Story: I love only two out of those four shows, and I’d still want to see Netflix versions of all of them, dumped into my lap in a big, virtual parcel. So what’s the problem with Hemlock Grove? It isn’t unwatchable on a per-episode basis: Lili Taylor, Landon Liboiron, and Nicole Boivin do good work with what they’re given, and there are some beautiful shots of Ontario. There are occasional thrills (like the aforementioned werewolf transition) and moments (baby Shelley glowing in her bassinet) that I really liked. But then there are problems, and there are a lot of them. The first is that, with so many characters grappling with so many issues (murders! Paranoia! Pregnancy! Bad scientists! Upirs! You’ll sit through most of the episodes before you know what an upir is, by the way), there is no fathomable reason why the plot should slide by so sluggishly, leaving a slimy trail of growing impatience in its wake. I can get with a slow drum roll (hi again, Twin Peaks!) and patiently wait while the suspense builds, but this sucker will wear you down.

The second problem is that the dialogue is completely wackadoo, and doesn’t always seem to be in on its own jokes — this line was, I’m pretty sure, intended to be incredibly sexy: “Did you know that the wettest place on earth is a small garden island in Hawaii?” And let’s not forget about misshapen Shelley’s letters to her uncle/pen pal, which are read in voice-over and make her sound like a Victorian lady (“astonishing how much the world’s troubles can be erased by the simplest smile, and the feeling of something precious against one’s cheek”) or the ultimate, indecipherable golden dialogue nugget: “That woman is what she says she is like a Mexican hates fireworks.” The third problem is that, if you’re going to be a weird-enough show that you feature scenes graphic because of either visual impact (naked lady corpse covered in hungry maggots) or context (the tampon and bloody handprint really added something to that bathroom cunnilingus scene we witnessed from behind the stall door), at least be weird enough to not be predictable or derivative. Granted, that’s not an easy feat during our current serialized horror renaissance (there are accepted guidelines to werewolf mythology, after all) but I think it would have been a more excusable flaw if the action had been dispensed more quickly. The rusty shackles of character tropes flatten the cast’s attempts at breaking out of their cardboard forms — Mean Rich Sexy Lady (Famke Janssen), Smart But Uptight Snotty Girl (Freya Tingley), Supernaturally Charged Hybrid of Tate from American Horror Story and Sebastian Valmont from Cruel Intentions (Bill Skarsgard, son of Stellan and brother of Alexander) — so if you were intrigued despite the disjointed, nonspecific foreign accents, your interest ultimately proved short-lived. And if you were particularly attached to any of the women who engaged in the sex scenes, well, that’s too bad. Though the plot eventually gets around to providing a reason for sexy ladies getting murgled in the woods, it still comes off as misogynistic punishment.

It’s tough to get into the plot without subjecting you to a lot of spoilers, especially after 10 hours of entrails and biomedicine, but I’ll give it my best shot: A couple of Gypsies, mom Lynda (Taylor) and son Peter (Liboiron) Rumancek, move into a trailer park in Hemlock Grove, Pennsylvania, prior to a teenage girl’s murder by a vargulf (“lady parts first,” because you know how psychotic werewolves are). Bookish Christina (Tingley) notices that Peter has werewolf fingers and gets mixy, spreading the rumor that he actually is one (this is true — you knew that from the teaser — but whether or not he’s the psychotic werewolf remains to be seen). Peter strikes up an unlikely and vaguely homoerotic friendship with Roman Godfrey (Skarsgard), a lad who lives up on Rich People Hill with his mother, Olivia (Janssen), and wonky-eyed giant sister, Shelley. The Godfreys — including Roman’s psychiatrist uncle Norman (Dougray Scott) and cousin Letha (Penelope Mitchell), who is pregnant by an angel (or is she?) — are owners of the White Tower, an ethically dodgy biomedical facility. Roman and Peter’s bromance strengthens when they band together to find out who’s committing the growing number of murders around the Grove, and probably also because their moms are both creepily affectionate (Lynda watching Peter transform into a werewolf had to be a metaphor for being caught masturbating). Of the assorted B plots, the one I liked the most was the town sheriff’s (Aaron Douglas) twin daughters, who mostly just do nothing but exist as shadow tweens who would become Mean Girls. I liked them in their ballerina outfits dusting Christina with blush. That was a very brief scene, by the way, so I should also tip my hat to another quickie brought to you by Destiny, “your sacred whore.” I wasn’t hooked by Dr. Chasseur (Kandyse McClure), a government-employed werewolf hunter (not her official title) whose tough professionalism and broken personal life are just too snoozily familiar.

The real question is, does Hemlock Grove suffer because of its delivery system? Maybe we would have benefited from a week to digest the scene during which Roman stares out over the water and says, “Stupid-ass birds!” before killing the flock with his eyes, or a little time to gestate on Chrissy kissing a buggy, gnarly corpse. Maybe we would have subconsciously engaged our imaginations to flesh out the Swiss-cheese plot or add some layers to why Peter’s never had a friend before, or embellish a character like Norman, who starts out so promisingly before being swept up in the one-dimensionality of it all like a doodle of a wave taking him off to Who-Cares Island. Presenting the whole season at once seemed like an invitation to a bacchanalia of total absorption in fantasy, horror, gore; the promise of Hemlock Grove was that it would be somehow impressively out-there and give you too much of everything. Unfortunately, watching the whole thing was less like some kind of insane, bloody feast of oohs and aahs and surprises, and more like eating $28 of McDonald’s in your car late at night. The good parts, the crunchy fries and first pristine bites of the first Big Mac, were forgotten after what amounted to too many greasy pickles. “This is a strange town, you can feel it in your balls.” Don’t worry, the sensation will pass. With time.