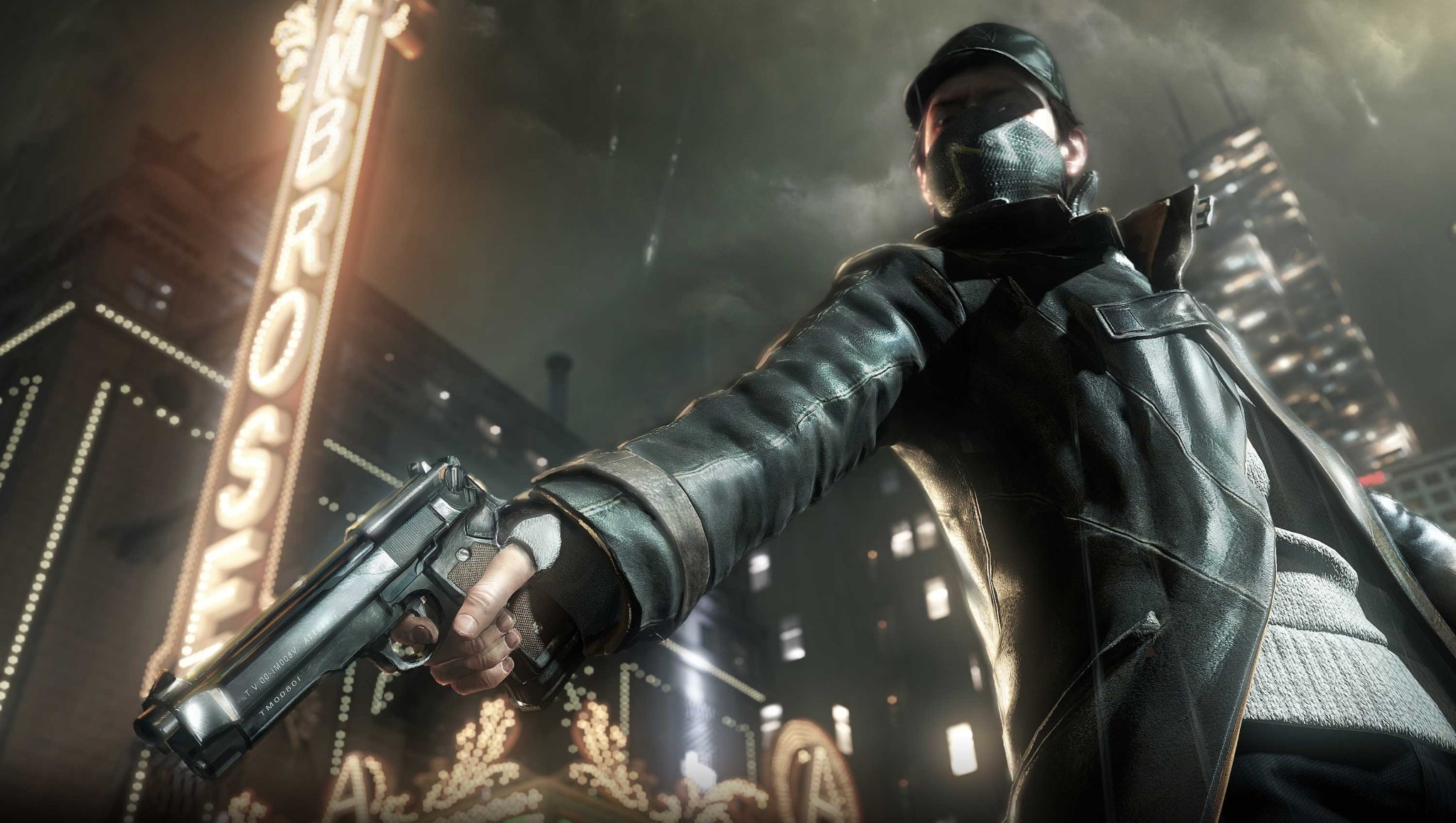 The development of the third-person gaming genre is notable for being the absolute outer edge of human storytelling technique. It’s a medium that, at its best, blurs the line between a player’s free will and the playable character’s narrative-driven arc in ways never seen before. A player becomes Niko from GTA IV, or a race/species/gender-personalized version of Mass Effect’s Captain Shepard, or the grizzled and heartbroken Joel from The Last of Us, and then that human player’s personality affects the way a pre-written virtual character approaches moving through his or (not often enough) her virtual world. A player can walk down a Los Santos street as any of the three characters from GTA V and start a fight with someone, or rob a bank, or buy a suit, or start a conversation with a computer-controlled character. These free-play opportunities are interspersed with written character missions that a player can approach in a variety of ways, enhancing the feeling of player/narrative freedom. In a series like Mass Effect — which doesn’t feature a true open world, but includes numerous options for a player to shape the in-game story — a player’s choices have trickle-down effects that wind their way through every iteration. And really top-notch character writing and voice acting, together with immersive graphics and gameplay, can create jarring, memorable moments like the end of Naughty Dog Studio’s Last of Us, where the gamer is suddenly confronted with his or her playable character’s “will” violently shattering the illusion of player control.

Ever since the first in-game video of Ubisoft Montreal’s Watch Dogs debuted at the 2012 E3 video game conference, it has been the most anticipated release of the still-young next-gen era. Combining elements of hand-to-hand combat, stealth, action, gunfights, computer/cell phone hacking, all in a free-roaming third-person open-world setting, it has the requisite graphical flash and dash that a gamer expects when they fork over $500 dollars for the latest video-game console. Delays kept it from launching as a next-gen bundling tentpole, but the game finally dropped last week and, after all that buildup and hype … it’s pretty good. But it’s not good in the way I was expecting or maybe even in the way Ubisoft intended. The visual polish — the environmental details, the various bells and whistles promised by that early E3 presentation and subsequent videos — is present in the final build. And yet, for all of its horsepower and solid gameplay, Watch Dogs is something of a joyless experience. The problems are in the storytelling.

In Watch Dogs you play Aiden Pearce, a shadowy hacker driven by a recent family tragedy to unravel a far-reaching conspiracy stretching from Chicago’s street gangs to its mayor to its high-tech operating system, the CTOS, which controls virtually every aspect of the day-to-day running of the city. Aiden is proficient with various computer systems, is a skilled martial artist, and is a SEAL Team Six–level marksman. But part of my problem with Watch Dogs is with the blankness of Aiden himself. How did he get so good at this incredibly diverse set of life skills? What are Aiden’s personal relationships like and why? These questions never really get answered, or they get answered in a manner too muddled to really set the stakes for some of the plot twists as you play through. At one point in the story, someone close to Aiden gets kidnapped, and his distress is obvious in a frantic cut scene that sends the player on a breakneck driving mission across the city. But then several missions with tenuous connections to the seemingly important goal of freeing a loved one pop up, diffusing the narrative tension. At one point, Aiden is arguing with the kidnapper over the phone in a way that suggests something closer to annoyance than fear.

The political and moral repercussions in the world of Watch Dogs are similarly confused. Part of what the game grapples with thematically is the idea of a world in which more and more information is stored and shared in ways that only a vanishingly small number of increasingly powerful people can really understand. There are clear nods to WikiLeaks, The Girl With the Dragon Tattoo’s Lisbeth Salander, and Bruce Wayne’s stalwart ally Mr. Fox’s struggle with his conscience in The Dark Knight. But where those examples utilized technology to, in their view, punish the wicked or balance a complex and morally fraught formulation between security and privacy, Watch Dogs seems like it wants to appear to take a stand, but it doesn’t really stand for anything. At one point, while hacking into a CTOS mainframe, Pierce wonders aloud about the implications of this vast data-gathering operation aimed at the citizens of Chicago. Yet one of the many side missions Aiden can take part in is compromising various private security cameras to spy on regular people, like he’s a Peeping Tom with a Stanford degree. Aiden works tirelessly, at the risk of his own life, to uncover a vast corporate conspiracy, but his prime source of income is digitally lifting the credit-card numbers of random people on the street and rifling through the glove boxes of cars he steals. His Profiler device can even accurately gauge the likelihood that a particular person will commit a crime, which the player is then obliged to stop. Again: Aiden can pre-identify future criminals with a device called THE PROFILER.

Video-game characters with questionable or opaque morals are nothing new (hello, Grand Theft Auto). But whereas GTA takes a cynical, satirical approach to virtual human nature, Watch Dogs wants to have it both ways, trying to craft a classic comic book–style vigilante hero out of a guy who rips off people’s credit cards in order to buy assault rifles with which to stop crimes. The thrill of playing GTA or Skyrim or Fallout is in doing things that the player and the game, through normal human experience, understand are wrong. Watch Dogs seemingly has no opinion on right and wrong and doesn’t seem very interested in it, either.

On a more basic level, the hacking, while definitely useful to progressing through the game, just isn’t that fun. Most of the missions in Watch Dogs give the player the option of approaching stealthily — hacking cameras, distracting guards with cell phone calls, remotely blowing up steam pipes, sneaking up to enemies and putting them in nonlethal, police-approved choke holds — or going in through the front door, cowboy style.

Which brings me to Watch Dogs’ strong suit: The game is basically a really good third-person military-style shooter. Enemies carry a varied array of weaponry and come in just enough flavors of difficulty to keep things tactically interesting. They display as good an adversarial AI as any console shooter in recent memory, attempting to flank you, taking cover when you shoot at them, and just generally seeming to value their virtual lives. Computer-controlled enemies that don’t have suicide wishes are the biggest part of what makes a good shooter; the remainder of the formula is the variety of weaponry (which is ample), the setting (a beautifully realized near-future Chicago), and the amount of stuff in the world that the player can blow up. Rest assured, stuff in Watch Dogs blows up real good.

The in-game emphasis on having Aiden complete missions in a hail of bullets doesn’t seem intentional, it’s simply a function of expedience. The mission to rescue the aforementioned hostage is a prime example. The player can either have Aiden guide the person out of danger by gaining control of the building’s security cameras and telling the hostage, over a hacked cell phone, where and when to move in order to avoid the patrolling guards, or just go in loud and shoot the joint up. After getting the hostage killed on several play-throughs, it just seemed simpler to have Aiden be like, “Wait right there,” and take out the guards in a rain of shell casings. It was easier and it was also more fun.

And therein lies another problem, nestled in the heart of the game’s strength: Gunning people down in video games is certainly nothing new, and I’ll happily cop to my love of the first-person shooter genre and hearing teenage racists curse my name over Xbox Live party chat. Watch Dogs, though, is the first game I can remember in which, through Aiden’s Profiler device, the player can actually know the names of the virtual people he just killed. And not only their names: their occupations, hobbies, if they just got divorced, their yearly incomes. It’s hard to feel all that heroic about Aiden, putting aside all the hacking/privacy/bank card stuff, after he just mowed down a bunch of CTOS guards making $42K a year. Listen, I’m not at all skittish about video-game violence, but the Profiler’s ability to ID the collateral damage feels like a missed opportunity to make the game something really interesting.

All in all, there’s a lot of promise in Watch Dogs as an ongoing franchise. The gameplay — especially the shooting elements — is tight, the graphics are sharp, and there are the beginnings of some interesting ideas implemented in original ways. What’s lacking is the emotional heft derived from having fleshed-out characters, along with the general sense of the game lacking polish. In the end, Watch Dogs is about a smartphone-obsessed man who’s good at shooting guns. It’s also, I believe, the first game in which a gamer must be concerned with the battery life of his virtual character’s phone.

In other words, you’ve seen this before.

If HBO had wanted an option on me for a Season 2 or 3, I wouldn’t have done it. I wouldn’t have walked into something where they could say, 'We’ve got you for the next three years.' I liked 'True Detective,' the whole series and the experience of making it, so much that I’d be open to doing another one now." -- Matthew McConaughey

Nerdsplaining Warhammer: Which of Your Favorite Actors (Besides the 'Fault in Our Stars' Kid) Like to Hand-Paint Tiny Figurines?