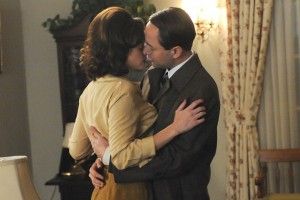 Look, not to steal the thunder from our intrepid tabloid expert Molly Lambert, but Us Weekly‘s exclusive on the IRL relationship between Mad Men stars Vincent Kartheiser and Rory Gilmore is one of the most brain-meltingly amazing pieces of writing I’ve read this year, well deserving of its own “Etc.” section.

Alexis Bledel got more than a paycheck when she appeared on Mad Men.

The Gilmore Girls alum, 30, who played the sex-starved mistress of oily ad exec Pete Campbell (Vincent Kartheiser) for three episodes now has the actor all to herself in real life.

This hot gossip comes after eyewitnesses spotted Kartheiser and Bledel gazing into each other’s startlingly blue and childlike eyes on a flight from NYC to L.A. last week — “Since they both had middle seats one row apart in coach, he turned around to kiss her in front of all the passengers!” The humble circumstances of their seating arrangement should come as no surprise to those familiar with Kartheiser’s extreme asceticism. I’m guessing this trip was a compromise between Bledel’s desire to fly first-class, and Kartheiser’s to travel by alpaca.

The couple have reportedly been together since March, and Kartheiser’s gotten the all-important stamp of approval from Bledel’s besties, who claim “He’s nothing like his character!” Phew — adulterous part-time pimps make HORRIBLE BFs! Anyway, sounds like it’s time for Kartheiser to finally get a toilet installed in his one-room Hollywood shack so he can have his special lady over for some existential cuddle time, and to like, compost together or whatever.