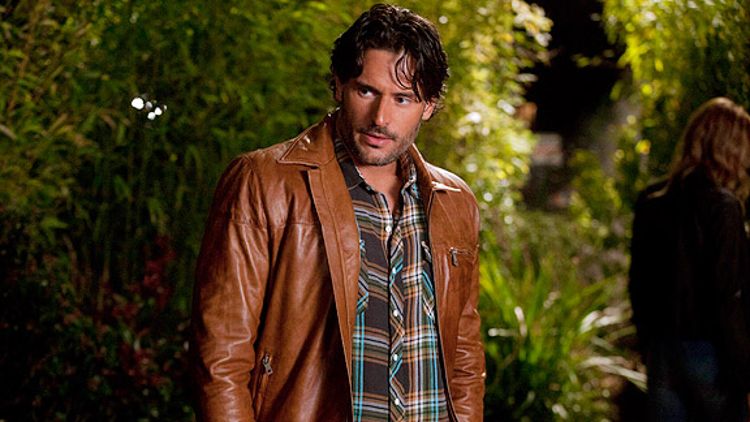 Don’t you hate when you’re screwing around on the couch in the freshman lounge with your ex-boyfriend’s best frenemy and the Vampire RA walks in? Bill is such a fangblocker, stopping Eric and Sookie from getting to second base. Bill cuffs Eric and tells Sookie it’s strictly vampire business, because he is a vampire businessman.

Eric gets locked in vampire jail with Pam, whose face is rotting off like a golem Real Housewife. Pam says King Bill is a pompous dork, which he totally is. Nothing like a little bit of artificial power to turn an angry nerd into an overconfident entitled Zuckerberg.

Bill requests permission to forever-murder Eric. He pretends it’s about something other than wanting to get back at him for schtupping Sookie. Vampire business: This time it’s personal. Terry and Arlene wake up to find their house on fire. Was it the evil baby or the evil doll? As per usual everybody expects Sam Merlotte to take care of things. Sam resents the expectation that he will fix everything, but he’s the most responsible guy in town.

Lafayette and Jesus are still in “Mexico.” I kept hoping Kenny Powers would show up on a Sea-Doo to lead them away to Valhalla. Tara’s girlfriend appears up in Bon Temps and confronts her about her tendency to run out on bad/difficult situations. They have some hot semi-abusive lesbian cage-fighter sex, which I guess means they made up?

Sam finally fires Sookie for being the worst waitress ever (ABOUT TIME!), except it’s not really Sam, it’s his brother Tommy who has somehow shifted into a clone of Sam. This season’s incest vibe comes back full-throttle when Sookie walks in on her brother Jason handcuffed to his bed. She starts asking him questions, whereas a normal sister would have just run the hell out of there and then continuously washed her brain with bleach.

Debbie and the greasy haired werewolf pack leader try to peer-pressure Alcide into joining the werewolf union. Marnie is watching a witch get raped in prison in an astrally projected flashback in her mind. Just normal stuff. The witch appears in her prison cell and flies into her body. Lafayette and Jesus do some rattlesnake-handling in a field.

Sookie tells Jason not to be ashamed of his newfound werepanther powers, citing that she has had no choice but to embrace her own mind-reading mental disorder. She tries to look on the bright side as always, saying that whatever makes you so screwed up is also what makes you special. Jason would rather be normal, but there is no such thing. Particularly in Bon Temps.

Jessica and Jason meet up in the moonlit forest clearing where half of True Blood‘s scenes take place. Jason is wearing a sweat-soaked grey tank top he stole off the set of Wolverine. Jessica tells him to picture his happy place and he stares at her chest.

Luna the horse-shifter single mom is surprised when after all that romantic build-up and sexual tension Sam Merlotte toots it and boots it, and then acts incredibly rude. But she doesn’t know he is just trying to force her out so she won’t notice he is really Tommy.

Jessica and Jason do a version of Before Sunrise (You Explode When The Sun Comes Up) on the grassy knoll where they confess their innermost fears and secrets. Jason opts to get the hell out of there before Jessica notices his raging soul-boner for her.

Bill gets Eric on his knees. He pleads with Bill for Pam to be released as his last dying wish, then uses reverse-psychology to trick him into sparing his life. Way to top from the bottom, E-Dog. Lafayette is possessed by someone named Tio Luca and can now speak Spanish. Much easier than buying those Rosetta Stone tapes.

Tara’s girlfriend is a manic pixie dream who apparently exists to compliment Tara, help her buck up, and boost her generally low self-esteem. Pam shows up to interrupt their lovers’ pep talk. Pam’s face may be shot to hell but her hair still looks faaaaaabulous. Marnie has absorbed the spirit of somebody named Antonia, and gets out of jail free.

Sookie finds Eric waiting in the forest clearing, basketball shorts fluttering softly in the moonlight. Bill stands out on his balcony listening to Neko Case just like regular straight guys everywhere always do. Eric and Sookie have the kind of wispy-fog, romance-novel sex this show is built on. I just kept thinking they might roll over onto Sookie’s shotgun. Until next week True Blood fans, walk softly and wear lots of summer sunscreen.