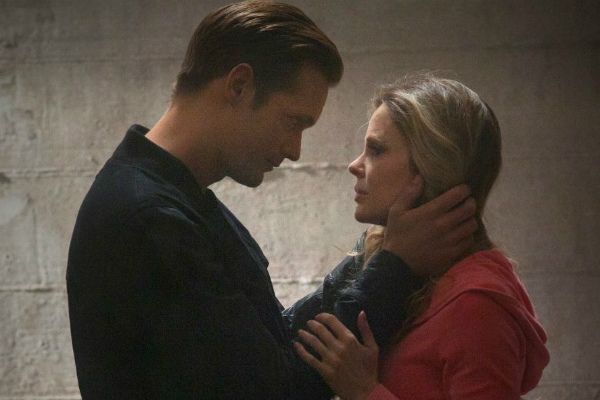 Tara’s attempted suicide by tanning bed comes to a swift and predictable halt at Pam’s black latex gloved hands. Pam hears out Tara’s self-pitying excuses but she is NHFT. Tara’s light-abraded pizza face makes her look like Freddie Krueger. Even if Bon Temps has a good dermatologist, they’ll probably turn out to be a gorgon.

Sookie yells a half-assed “Sorry for murdering your soul mate!” at Alcide as his truck pulls out of the lot at Merlotte’s. Sookie sure has a weird way of flirting. She’s on her fairy blood period tonight. Lafayette reminds Sook that he could’ve sold her “peach-pie ass out so many times” but abstained out of dumb friendship loyalty. Fair enough, Lala!

“Look, girl, I miss the old me, too, but that hooker won’t be back anytime soon.”

Lafayette drives it home that while Sookie always escapes death and shakes it off in time for her next waitressing shift or hot makeout sesh, life has not been sweet as tea for those around her, many of whom are now dead (or undead). He suggests that Sookie is the poisonous daisy chain linking all the bodies together. Bill and Eric escape from the AUTHORITAY to a dark dirt road. I feel like this season is enjoyably paced slightly slower than the last.

Bill and Eric’s continued Hope and Crosby routine is one of the better plotlines so far. The worst is currently a tie between Terry and Arlene’s firebug hunt and Sobotka’s burgeoning relationship with Holly the Witch. Some side characters work best as side characters, while others, like Pam, we actually get excited to see fleshed out. Although sometimes we end up eating those wishes later on.

Speaking of fleshed out, Christopher Meloni is sprawled out in bed naked with a Macbook on his lap and I thought I saw his balls but it was just the red silk sheets. He and Salome talk Nora’s torture. Sookie storms into Jason Stackhouse’s abode and confesses to Debbie’s murder. Jason reacts to the news of Tara being turned into a vampire as if he doesn’t experience insane life-changing magical shit literally every day.

Pam stomps around Fangtasia, preparing for the nightly vogue ball. Eric sits on his hilarious throne as Pam tries to smooth things over, explaining that she only brought Tara because she made her. Tara wears Fangtasia swag and bonds with Bill over vampire small talk. He only waits a minute before asking about Sookie. Tara is understandably bored by this. Eric body-slams Pam on the bar.

“You’re the Dylan and I’m the Brandon. Everyone agrees.”

No offense to Alexander Skarsgard, but is he doing a Pete Campbell on his hairline? Pam pleads for the life of their relationship and promises she didn’t dig up Russell. Then she tries the opposite tactic, telling him to cut her off for all she cares. Eric stalks off to conspire with his new bestie Bill.

Bill and Eric try to figure out who leaked the Russell info. Meanwhile, a child actor pays his parents’ rent as a group of insane caricatures like a big-haired Southern diva and a Dracula argue with him around the table about the Sanguinistas movement. Frank Sobotka has Wiccan phone sex on company time. A smarmy judge invites Sobotka and Jason out on the town.

“It’s not my fault I throw it like I’m famous!”

Sam’s pack shows up at Merlotte’s to publicly shame him for being a Suppressive Person. He tries to shake them by admitting the food there sucks. The staff is usually pretty preoccupied with their personal lives. Sookie walks around reading everyone’s thoughts, which she either hears or hallucinates to be all about what a jerk she is. Sookie is Hannah Horvath? They share an affinity for self-destructive sex and both have alliterative names.

Lafayette turns into a Santeria panther and levitates Sookie’s car, scratching his claws down the hood. Alcide tells Debbie’s parents about their daughter’s death, but rather than snitch on Sookie he blames the already dead Marcus. Alcide cops to killing Marcus but leaves out that whole weird thing where he watched Sookie have forest sex with Eric.

“You’re the secretary treasurer for the International Brotherhood of Stevedores at Local 47.”

Sookie stunt-jumps out of her tinkered-with yellow car. Meanwhile, Terry and Noel from Felicity are having PTSD flashbacks to Iraq on a drive through South Dakota to find their lost pyromaniac colleague. In the flashback, we learn that the crazy guy once opened fire on civilians. Iraq, South Dakota, and Bon Temps all sure look a lot like California.

A shaken and stirred Sookie turns to her bottles for comfort. At the police station, Sobotka wants to go deeper on the Debbie Pelt case but Jessica swoops in just in time to glamour him into forgetting all about it. In the Fangtasia basement, Pam wears her own pink-velour take on the classic vampire sweatsuit. She checks up on a sleeping Tara because TWIST! Pam is a good mom. Eric creeps downstairs to fill Pam in on the Russell Edgington situation and talk her through how surreal it is that she has a kid now and will forever.

“That’s cool, I can get down with some kidnapping play.”

In a limo, some fairy hookers run their fingers through Jason’s hair, but then they throw a black bag over his head. Jason is chill, because he’s probably done way weirder things than this in his life. Spontaneity and danger keep things fresh. At vampire mansion, Bill and Jessica look for a wire somewhere but only end up finding a stray joint left over from Jessica’s house party. He shrugs it off like a cool dad and she suggests he hang out with Sookie. I guess Jessica is a Bill/Sookie ‘shipper. That’s so Season 1.

Alcide shows up to find the sloshed Sookie getting white-girl wasted on fruity drinks in a peach cardigan while listening to “Escape (the Piña Colada song).” Alcide tells her how he cleared her name and asks her to make his a double. Terry and Noel find their old comrade living in a Deitch Projects installation. He is also hoarding weapons.

The fairy hookers lead the masked men into the fairy field for some supernatural sex work. They pass through a vortex into a ridiculous Baz Luhrmann–style fairy club. The club features horrible burlesque-lite dancing, circus performers, and other Pleasure Island trappings you might find in Vegas or at a cheesy Hollywood spot like Supperclub. Aerial silk dancers descend as the judge leaves Jason in this Nomi Malone in “Goddess” hell.

Sam shows up at his pack’s lodge to find his packmates dead at their table of hors d’oeuvre. No! What about the cheese! Pam tries to be a tough but fair vamp mom, forcing Tara to get out of bed, but of course she is going to be an Amy Poehler-in-Mean Girls type of “cool mom.” She forces Tara to feed in front of her, which is soooo embarrassing! Who wants their mom to see them feed?

“Why, do you want a little bit? Because if you’re going to feed, I’d rather you do it in the house.”

Sookie tries to get Alcide to drink her disgusting Long Island iced tea concoction called an Orange Marzipan. He flirts with her heavily despite the fact that she killed his ex-girlfriend. She even makes a little cute joke about it. Yikes. She didn’t even kill Debbie with magic! She blew her head off with a gun! They kiss (finally) and start dry-humping on the couch while Bill and Eric watch from outside through the fogging-up window, like the couple of night creepers they are.

“I should have held out for Game of Thrones.”

Christopher Meloni holds a knife aloft and continues to treat his insane dialogue as if it were Shakespeare. Meloni looks for the rat in the group. “Treachery. Sedition,” he intones in his awesome Christopher Meloni voice. The little kid betrays himself and admits he accidentally sent the YouTube video to the whole ACN mailing list. Meloni righteously splatters his blood all over his face. Get rid of every character except for Christopher Meloni and Jessica.

Back at the horrible fairy club, Jason runs into his fairy cousin. She reassures Jason that she doesn’t give hand jobs, and explains that Sookie is in danger from the vampires who killed their parents. MYTHOLOGY! A steampunk guy in a bowler hat and suspenders tries roughing them up a little, then tosses them through the vortex onto the magic lawn portal. Try not to think about Mad Men. If you do, you start missing everybody.