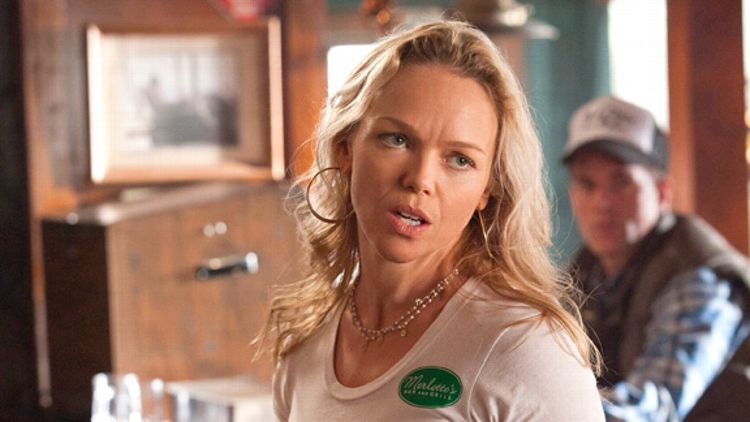 True Blood has always had a little bit of a Grecian tragedy motif to it — what with the season of the Maenad and all — but never so much as right now. First up: MOM KILLIN’, good old fashioned accidental mother murder courtesy of Tommy the dogboy Merlotte. Then the Scooby gang of Tara, Lafayette, and Jesus accidentally run over magic Marnie, but like all witches she takes a licking and keeps on tricking.

Godric tries to wake Sookie up with some unconscious edging, and Eric zaps in to remind him that this is not Revenge Of The Vamperds, you need consent to sensually touch someone’s thighs even if you bought their house just to hang out with them more. Godric goads Eric to drink from sleeping Sookie like it’s a flash pop-up ad on a supernatural porntube. Eric wakes up in his Swedish modern das bunker with his fangs out (black bedsheets? gross) scared of his inner desire/ability to screw shit up.

Jessica’s breasts rescue Jason Stackhouse from his formerly certain death by molestation. Jessica’s boyfriend Hoyt has figured out that Jessica has been acting shady as hall lately, although he hasn’t quite put it together that it’s because she’s been banging off the clock around Bon Temps. Bill and his granddaughter-lover hang out in his over-decorated office. By the time you are giving somebody a list of reasons why they should sleep with you, it’s too late. You are not getting laid, and your dignity is somewhere around your ankles. Lucky for Bill, he has a supernatural app to make ex-trysts go away,

Pam’s witch-given facelift is ruining her OKCuspid ranking. She tells Bill to get his priorities straight: Pam’s self-worth/vanity trumps all else. Lafayette and Jesus are experimenting with headbands and hats. Jesus has a flashback to his Mexican childhood that provides the second most “is this racist?” moment of the night (we’ll get to the first later). Tara’s girlfriend in New Orleans thinks Tara is cheating on her with somebody named Tara, but that is just because she doesn’t know that Toni is really Tara.

Sookie asks Holly if she can sit with the witches at lunch. Holly says “sure!” but passive-aggressively mind-monologues like “whatever.” Jason and Hoyt talk about Jason’s weekend of gangbangery. (I can’t. If you’re going to try making a rape joke, it better be incredibly funny. This is just offensively dumb.) Arlene and Terry attempt to quell the hate inside their daevil baebe by hiring the Reverend Daniels and Tara’s crazy mom Lettie Mae to do some exorcising. This is the other “is this racist?” moment this week, made even more uncomfortable by some meta-questioning about whether or not it was racist.

Sookie and one of her many sundresses (sunshine yellow!) seek out the counsel of Marnie the witch. Marnie does a free reading and gets in a voiceover fight with Sookie’s gran, who tells Sookie to get the heck out of there. Sheriff Frank Sobotoka pulls over Sam and Tommy for matricide but they pull the old gate ‘n switch (putting an alligator in the back of your truck in place of your dead mother you killed).

Tara gets to talk about herself for one second over some ice cream and beer and tells Sookie about how she’s a lesbian now, then lists all the very good reasons she needs to get the hell out of Bon Temps. Tara calls Sookie a hypocrite for chilling with Eric after all he’s done to both of them, and she is not wrong. Eric has his blue sleeveless sweatshirt on, and shrugs. Bill does a videoconference with Marnie on vChat. Bill looks like he is in Wall Street 3000: Vampires Never Sleep Because They Are Vampires.

Alcide’s packmaster from Shreveport shows up to collect his union dues, but Alcide refuses to conform to groupthink and join up. The Merlotte brothers dispose of their mom’s corpse in the swamp on some real Southern gothic madness shit. Terry and Arlene have some sexy committed relationship sex with all of their clothes on (keeping it fresh!). Terry is the best boyfriend/dude in the whole True Bloodiverse.

Jason can’t even enjoy his fantasy about Jessica because he feels too guilty about doing his best friend’s girlfriend. What is wrong with the Stackhouse siblings that they are so moral even in their dreams? Haven’t they learned that crime pays and being ethical means you get screwed by less ethical people? Sookie tries to convince Eric that all his innate capacity for cruelty doesn’t mean he can’t change. Eric says he doesn’t want to be responsible for turning Sookie into a cynical bitch if it turns out he really can’t.

Eric accepts her porch proposition to come back in and gets rewarded with his first non-fantasy Sookie makeout sesh. Bill’s balls ride up in his stupid yuppie suit, because he senses Sookie kissing his best frenemy nearby. The problem with being Vampire King is that then you have to go to all the vampire meetings. Pam in her death-veil, sells out Eric in order to get her fierce face back. Can’t blame her!