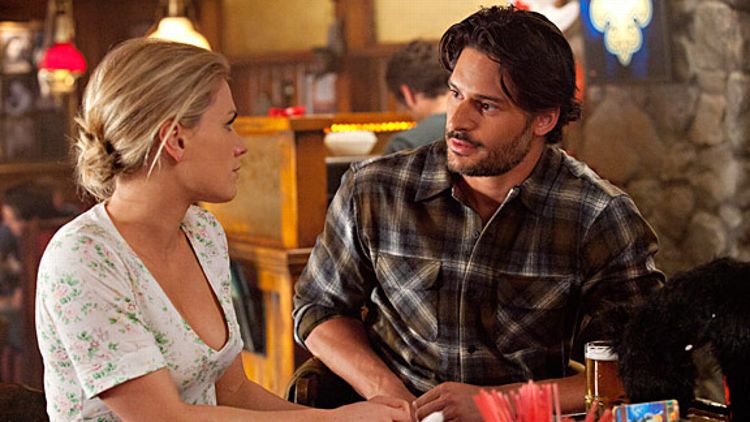 Lafayette and Jesus are having a porch talk about feelings, except Lafayette doesn’t talk too much because if he did Jesus would realize he’s been POSESSED. Jesus kisses his boyfriend goodbye on the mouth and suddenly realizes that Lafayette is no longer Lafayette, just in time to get stabbed in the hand with a fork.

Sookie makes herself some coffee because hey didn’t this bitch used to be a waitress? She leans down and sees the ghost corpse of her sweet Gran. Tara comes downstairs just in time to be a sounding board for Sookie’s fears. Tara is not like, “Hey, remember how my hand is screwed up, and that time I got repeatedly raped by a crazy vampire who was great at texting super fast, and oh yeah I just discovered my bisexuality and learned mixed martial arts.” No, instead they’re still discussing Sookie’s memories of Gran. Sookie Sookie Sookie!

Hoyt’s mom and Sam Merlotte are the sole visitors at Tommy’s funeral. Sam Trammell and Hoyt’s mom enter into a weird pseudo-parental bond, without any trace of sexual intentions from Hoyt’s mom despite the fact that this is True Blood. Who is banging out Hoyt’s mom? Does Hoyt’s mom not deserve to get banged out too, dumb show? Being an old Southern lady isn’t all sweet tea and pecan pie.

Jason gets ready to friend break up with Hoyt, and hey has Hoyt been working out? Jason confesses that he had sex with Jessica, and Hoyt just laughs because that is so ridiculous! What a hilarious LOL! Hoyt realizes Jason is not kidding, and then he punches him in the face. Does Jason have a little Hitler mustache? Hoyt beats the hell out of Jason for being a selfish sex-driven a-hole, and then tells him he will never love anybody. Why is Hoyt killing it ever since he and Jess broke up? He’s making last season’s post divorce Don Draper look like a sad sack of mini bottles.

Nelsan Ellis is acting the hell out of Lafayette’s possession using his pink silk kimono like Madame Brujofly or some shit. Sookie is so out of it that she doesn’t know it’s Halloween. Arlene and Terry are dressed like zombies, because there’s not enough demon stuff in Bon Temps always, gotta throw in some cat scares!

Sookie makes up with Sam Merlotte. Sam didn’t know they were fighting, because Tommy was the one that actually fired her. Lafayette is doing the full Kathy Bates in Misery on his boyfriend. Jesus is really regretting his decision to take their sex life in a less vanilla direction. It seemed like a fun idea but now that he’s locked in the harness being forced to do dangerous invocations he’s having potential regrets. Terry greets a character we’ve never seen before in a way that lets us know these characters have known each other a long time. It turns out, it’s Sergeant Noel From Felicity! You know, Ben was obviously a total Catalano, but I always liked Noel.

Alcide is drinking alone just in time for Sookie to show up in a low-cut top and conveniently vampire boyfriendless. Alcide tells Sookie he’s been fantasizing about her (in a purely romantic way, naturally) all the time because she’s been leading him on in an emotional affair and then playing dumb/helpless whenever Debbie gets mad. I’m sorry they ruined Debbie like that. Can’t characters on this show have long-simmering more complex motivations?

Tara’s motivation should be to GTFOBT. She walks in on Jesus’s dead body in a chair. 1. It’s Halloween, this could be a prank. 2. Why is Tara only ever a plot device? 3. Or made into a victim 4. GTFOBT. Holly the witch is dressed as a fairy and smoking a spliff. Sookie turns down a hit, claiming weed interferes with her mind-reading (yeah duh, that’s the point). Tara figures out that Lafayette is Marnie,

I like this three-chicks-in-a-car thing almost as much as I like the two male lead vampires tied up shirtless to a pole together like the mast of a land-ship in front of vampire HQ. Lafayette shows up in a powerful womyn caftan like Hillary Clinton at Chelsea’s wedding. His face turns into a ridiculous Spencer’s Gifts voodoo mask as he gets ready to burn Bill and Eric alive. A gravestone does not read “Adele” and “Rolling In The Deep” does not come on because True Blood shows restraint for once in its life. Antonia shows up in her raggedy potato sack dress. Antonia morphs into Gran, who pulls Marnie out of Lafayette’s mouth. So Gran is a witch? Chill. Marnie says nobody cares what she wants, and that they mock her as a “creepy pathetic terrified mess.” Did she read my Jennifer Aniston post?

Gran talks her down by saying “whoops no one cares.” They ascend with the other deadies into the spirit realm, where elderly women are revered and paid equal salaries. Arlene is taking the garbage out back at Merlotte’s, and Rene (season 1), her devil baby’s babydaddy appears in the lot. Ex-boyfriends never really go away, they just die and come back and show up at your place of work unannounced.

Why does he still have the fake Cajun accent? We found out it was fake! It must just be real fun to do. A flowing red velvet cape through the windy woods gives momentary Kate Bush vibes. It’s Jessica! Dressed in a sexy red riding hood Halloween costume. Jason lets her in and they screw on the couch, in a total fan-service nod. The Stackhouse siblings have such a vampire fetish.

Speaking of fan service, Pam goes off on Sookie’s “stupid fairy vagina” and terrible name. She rails about how Eric has screwed everything in sight for a billion years and never broken his loyalty to ostensible lifemate Pam, but Sookie’s manipulative mind-reading mothering streak puts the whammy on all powerful vampires. Sookie gets to live her vampire three-way fantasy as she heals them. (Why are Bill and Eric wearing matching bathrobes? Don’t ask stupid questions.) Eric and Bill make Sookie tell them what she likes best about them. She’s being loving but why do I get the feeling she’s taking her stupid fairy vagina straight to werewolftown? Is it the brown leather motorcycle jacket, foreshadower of werewolves?

Poor Lafayette has to live with the ghost of his best boyfriend ever. Jesus says “I’m cool with how things went” which seems like some post-traumatic shit to make Lafayette not feel crushing guilt for the rest of time. Ghost Jesus disappears. Sheriff Sobotka apologizes to Holly for being such a jerk to her when he was addicted to V. Holly brushes him off with a hug. Ladies are uppity this True Blood season finale!

Luna and Sam get cutesy at her front door as he bids her goodnight. The moment she leaves a panther (might be Tommy) shows up. Jessica laces up her sexy Halloween costume after tooting and booting it. Nothing like having to put a whore costume back on. Jason says he’s good at taking direction, and Jessica’s like “OH COOL I MIGHT HAVE A COUPLE OF IDEAS.” Jessica peaces out, leaving Jason to stew in his oxytocin. There’s a knock on the door, and it’s the dead Reverend from the last round of vampire wars, now a vampire himself. He fangs out on Jason.

Nan Flanagan appears in all her leather catsuit finery to yell at Bill and Eric for getting her fired. She says that she refuses to be replaced like “a fat first wife” and calls them puppydogs. Eric reacts by killing some guards, then Bill murks Nan Flanagan. How dare Nan Flanagan try to emasculate them that way. Only Sookie gets to do that!

Debbie shows up with a shotgun. Aiming for Sookie, she shoots Tara instead. Sookie is so fucking pissed that she kills Debbie. Tara appears to be actually dead, and Sookie screams for somebody to please help. I predict somebody shows up in the first five seconds of next season to save Sookie. Cue the fade into Larry David.