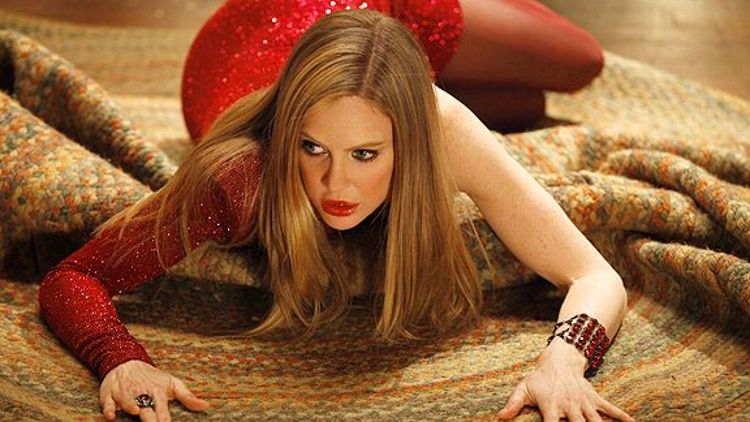 The werepanther children still holding Sookie’s brother, Jason, hostage speak in a hilarious Southern patois that involves a lot of “I reckon.” In the land of the panther people, Jason Stackhouse is the smartest person around, but it doesn’t help any when he’s tied up and can’t reach his cell phone in his jeans.

Stupid ethical Bill Compton is the worst person for Jessica to ask for advice about last week’s bathroom-stall cheating escapade. Despite his own recent adventures in sexual hypocrisy, Bill remains a rock of morality. He tells her to tell Hoyt the truth. Pam is sucking somebody named “Jethro” in her office when Sookie calls to tell her about blank-mind Eric. They keep giving Pam and Sookie reasons to interact, which is awesome because they’re the coolest bitches in Bon Temps.

Turns out a hot guy whose mind has been erased and just tells you how beautiful you are is almost more fun than an a-hole who hangs out at your house and criticizes you all the time while trying to collar you (I said almost). Pam tells Sookie that she absolutely must babysit the brainwashed, hairless Aryan man in her kitchen, and Sookie pretends that she cares about getting compensated for her efforts.

Jessica’s boyfriend, Hoyt, may be dumb but he ain’t stupid. He picks a fight with her and she confesses she bit another dude. Jessica doesn’t sound that convincing apologizing, and Hoyt can tell, so she wipes his mind. She doesn’t seem to even feel that bad about wiping his mind, but she also didn’t seem to feel that bad about being caught in flagrante at Fangtasia.

Sookie continues trip-sitting vampire Eric, who has changed into an awesome blue sleeveless hooded sweatshirt. Nobody rocks casual separates like the Northdog. Lafayette has a point that Tara should ditch Bon Temps and go back to her insanely hot girlfriend in New Orleans. Lafayette and his boyfriend have a pretty perfect relationship, except that Jesus (yup) is too interested in seeing just how far Lafayette’s witch powers extend.

Frank Sobotka is really worried about his common law partner Jason Stackhouse’s whereabouts. Sheriff Andy Bellefleur wandered off the set of every other HBO show. He thinks he is in Boardwalk Empire or How To Make It In America or Entourage and keeps waiting for the hot flappers/hipsters/D-girls to show up. Word to Andy: They are never showing up. You are trapped in this hell of all magical hot guys with nice bodies foreverrrrrrrrrrrrrr.

Andy’s hell is Sookie’s paradise, and her hot werewolf boyfriend dressed like a Brooklyn lumberjack returns to potentially do her a favor. Sookie’s various boyfriends are all handsome and tall with excellent chest hair and very different personalities; Bill is the hyper-loyal romantic, Eric the seductive asshole, and Alcide is a sensitive sad sack. Werewolf dude Alcide is the most genuinely interested in Sookie as a person with her own inner life, not just an object that represents victory in vampire politics. For some reason that sends her running the other way.

The theme of this episode is that women can be just as abusive in relationships as men, given the opportunity and enough rope. Jason’s latest psychotic lady friend, Crystal, tells him he’s basically going to be forced to breed panther puppies. You know that friend you have who always dates blatantly crazy people and then gets really surprised every time when they turn out to be nuts? Jason Stackhouse is that friend.

Tara meets up with Sam to drop the traditional “I’m seeing somebody” new bomb on her ex. Sam waits until Tara reveals she has a new partner to mention that he is also seeing somebody (hot shapeshifter horse Lady Palomino, she of the sun-dappled forest haunches). Tara doesn’t mention that her own new boo has a vagina, because they have to save some plot points for the upcoming episodes.

Bill continues to play American Gigolampire. Now that he’s in the field women are throwing themselves at him. Apparently all the other men in town are gay, racist, and/or terrible at sex. By default Bill has more options than he can realistically even bang out. This makes him feel appropriately annoyingly smug except that he really wants Sookie, the only person he can’t have. Nevertheless, he listens to some other hot lady’s proposition about how the smartest most powerful people in town should be doing each other. She tells him that if it doesn’t work out it won’t impact their friendship (IT’S A TRAP) and he says it’s cool as long as she can accept that he’ll never love her. She says whatever.

Sam Merlotte’s brother Tommy surprises him at work and reminds us again that Sam is kind of a passive-aggressive douchebag . Turns out Sam and Bill, always the “nice guys” of True Blood, were actually just suppressing a lot of fairly well-hidden hatred, contempt, and sexually entitled anger all along. Sexual power corrupts like no other.

Then there is another one of True Blood‘s trademark horror torture basement scenes. Basement scenes are True Blood‘s equivalent of the Aaron Sorkin walk ‘n talk. It’s like we won’t notice people are just standing around doing expositional dialogue as long as somebody is getting whipped or drawn and quartered in the corner. Yup!!! The head witch from Lafayette’s coven does some kind of terrifying incantation and then slits her wrist into a goblet and drinks it. She wants to know why she was “born with one foot in another world” (WHO DOESN’T?). The demon doesn’t come down so she keeps cutting her arm and things get really genuinely creepy.

Sookie is sitting at her kitchen table reading a book in her waitress shoes and work braid, like any sexually magnetic off-hours service worker. One of the fan-unfavorite fairies from last season’s finale shows up to drag Sookie back into one of the show’s least-loved plotlines (Arlene’s devil baby was mercifully absent this week). Brainwashed Eric, all stupidity and abs and vampire machismo, pounces on Sookie’s fairy godmother and drains her. The fairy turns into the melting face from Raiders Of The Lost Ark. Eric does a hilarious “who, me?” face. It looks kind of like this
O _v___v_ O. See you next time, when I may not remember any of this!