Trailers of the Week: Cloudy With a Chance of Meatballs 2, Eden, In the House, and More 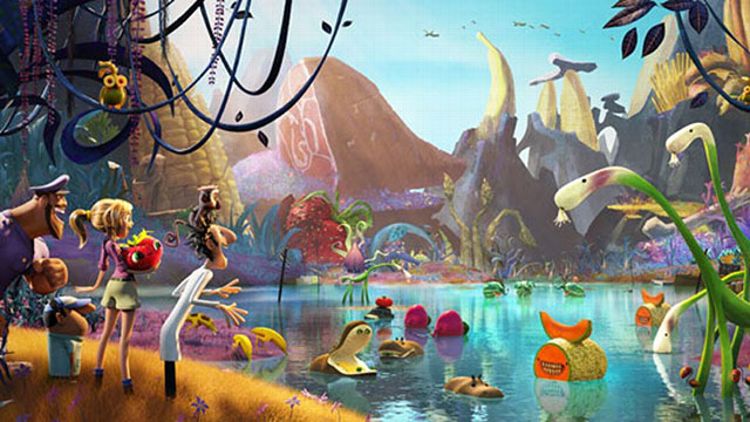 Cloudy With a Chance of Meatballs 2 (September 27)

Silver: I was pleasantly surprised and thoroughly entertained by the first Cloudy With a Chance of Meatballs. I’d initially disregarded it as yet another Hollywood studio’s half-baked attempt to enter the world of animation, but the writer/director team of Phil Lord and Chris Miller put together a film that was legitimately funny and at times cleverly subversive. (These sensibilities carried over into last year’s 21 Jump Street, their most recent film.) Cloudy definitely merited a sequel, but the first trailer for Cloudy 2 leaves me wanting. I don’t see any of the crafty set pieces or humorous situational business that made the first one so unique. Lord and Miller are (currently) nowhere in sight on this film (they’re not even listed as producers), and their influence is clearly missed. This trailer takes a huge swing and ultimately misses by positioning the film as nothing more than an overstuffed sequel with enough cringe-worthy food puns to make one want to consume a bottle of single malt intravenously. As it was with the first Cloudy, I hope I’m wrong and grossly misjudging this film. Subsequent trailers will hopefully pacify my fears.

Browne: Sorry, Silver, but we seem to have differing opinions on the beauty that is the food pun. I can’t get enough of them.

JUST KIDDING, GIVE ME ANOTHER:

I can’t wait. I couldn’t be more serious.

Silver: Truth: We’ve all seen this film before. Larger truth: A great cast and someone with a solid pedigree behind the camera can cancel out a clichéd premise to use familiar narrative tropes as tracks on a roller coaster, simply laying them out to move the action along from one plot point to the next. Peeples appears to be a great example of this larger truth. It’s the rookie directorial effort of Tina Gordon Chism, whose previous credits are as the writer of ATL and Drumline — yeah, that little piece of rhythmic awesomeness we all love but won’t publicly admit loving. And its cast is packed with talent: the hilarious Craig Robinson, David Alan Grier, and Malcolm Barrett (who? This hilarious dude from the criminally canceled Better Off Ted), and my favorite, Kerry Washington. (I love you. Call me.) So I’m going to look past a trailer that could have easily been titled Guess Who, Monster-in-Law, Meet the Parents, Four Christmases, The Family Stone, or Father of the Bride and remain optimistic.

Browne: WHY COULDN’T IT HAVE JUST BEEN TITLED PEEPLES. DOES TYLER NOT UNDERSTAND “TYLER PERRY PRESENTS” MAKES ME WANT TO SKIP THIS FILM?

Someone’s got to talk to T.P. And I think it has to be me.

But seriously, this looks extremely watchable. And you have to be proud of Craig Robinson for making his way from the Office warehouse to a leading role. He is the American Dream.

In the House (TBD)

Silver: Every once in a while it’s nice to cleanse one’s cinematic palate with a briny tale of unrealistic, age-inappropriate lust and debauchery. And no one spins a yarn like this better than our French filmmaking friends — more specifically François Ozon, whose 2003 film Swimming Pool is still bouncing about in the darker corners of my subconscious. I’m going to see this film, (hopefully) enjoy it, and never speak of it again.

Browne: This film looks intriguing and, yes, brings out a certain creeper living inside all of us. But the title reminds me of the ’90s version of In the House starring LL Cool J and Debbie Allen.

It’s all I can think about. Sorry, fans of French film.

Silver: Conceptually, I totally get this. Cars and Cars 2 were huge worldwide successes, so an expansion of this talking-vehicle universe seems like a logical idea. Planes, trains, boats, lawn mowers, roller skates … I get it, the box office and licensing numbers are unfathomable. But I’m confused. Isn’t Monsters University THE Pixar film of 2013? And more specifically, the summer of 2013? Pixar and Disney do not strike me as companies that would cannibalize their audiences. So I did some research (and by that I mean I went on IMDb), and what I found did not help. The bombastic Top Gun vibe of this trailer does not match its quaint summary on IMDb (which by my interpretation read like an amalgamation of story points from Cars and Cars 2). More than this, Planes is listed as a Disney movie, but it is not a Pixar movie. It’s by DisneyToon Studios, a group most known for such hits as the Tinker Bell spinoff films and direct-to-video sequels to The Lion King, Tarzan, Lilo & Stitch, The Little Mermaid, and Bambi. I’m not being facetious, these titles actually were successes, just not theatrically. So is Planes a direct-to-after-market title? All indications point to “no.” Is Pixar running the creative and physical production process on this show? Would it actually let another group handle its IP? The trailer has the look and feel of a Pixar film, so maybe it is involved. My interest is piqued, but I’m not sure it’s in the right way. I’m going to keep an eye on this one as new details, and looks, are released.

UPDATE: For a few hours on Thursday, another trailer for Planes was leaked online (and then quickly taken down). It was a much better representation of the IMDb summary, but it also confirmed my suspicion that Planes might simply be a “best of” the Cars films. Pixar isn’t one to run itself back, but then again, this isn’t Pixar, is it? It also was released that Jon Cryer was the original voice of the lead plane, but has since been replaced by Dane Cook.

There’s so much to say about that, but this Planes post is already far too long. So I’m going to close with a question and an observation: Is a swap of Cryer for Cook really an improvement? And I believe that in both trailers the voice of the lead plane is still Cryer’s. I’m so confused.

Silver: Without knowing it, I already composed my post for this film back in June. Everything I wrote, word-for-word, sans the title, about Sinister applies to The Conjuring. Take a look.

I’ve talked a lot of smack about the hackneyed nature of the modern horror milieu, so it might seem a little odd that I think The Conjuring looks great and I can’t wait to see it. I’ll admit straight up that I’m knowingly disregarding the all-too-typical cookie-cutter construction of this trailer and the seemingly familiar haunting/possession story line (the tropes and beats are all there), but for some reason the moments and images showcased in this trailer actually scare me. With film, many times solid direction and execution are the best antidotes to mediocrity (see Insidious, which just so happens to come from some of the same producers as Sinister). Also, like comedy, horror is totally subjective. I could get all self-analytical, but let’s just accept that I can’t tell you what you think is funny, and there’s no way you can tell me why the birthday scene from Signs still gives me nightmares.

But I do have one fresh thought. Since many of these films are “based on a true story,” when are we going to see the Rosencrantz & Guildenstern Are Dead–esque side film about the sadistic neighbors who pump PCP into these poor suckers’ homes to induce these terrors? Now that’s a film I want to see.

Browne: Horror films have actually started to affect me with regard to wanting to live in a house. It’s just too much space for evil to reside. I think I’m posting up in a studio apartment for the rest of my life.

This film looks terrifying, just like all the others.

Silver: Nothing says “fun night out” like a good sex-trafficking film staring Jeff Bridges’s brother and a former Real World/The Challenge star. (I know Jamie Chung has been in other, better, more respectable productions, but listing any of her other credits would undermine this feeble attempt to be snarky.) Although I’m sure it’s hard to watch, I actually think this film looks interesting. What struck me the most about this trailer was the inclusion of the SXSW Audience Award laurels. I think this film winning an award like that at a respectable film festival like SXSW says less about the film than it does about the festival’s audience. Weirdos. (I’m kidding of course. Well, maybe half kidding.)

Browne: The thing I enjoyed about this trailer is that it didn’t give away too many of the plot twists and turns in the two-minute snippet. Sure, you got some of the main themes, but I don’t fully understand what this film is about. Which is a great thing.

I’m excited for this. Also, shout-out to Jamie and the entire Real World: San Diego cast. Especally you, Jacquese.

Silver: I want to see this film more and more with each new look. And I don’t think it’s a coincidence that a trailer this strong dropped with about six weeks till the film’s release. This 2:29 is a perfect blend of action, adventure, sci-fi, thriller, and Cruise — which creates a solid foundation on which to build both broad and targeted marketing. I’m now all in on Oblivion.

Browne: Yes, the trailers are getting better, but I really hope there’s not a fourth one, because then I’m going to start despising this film. Just let it breathe until the April 19 release. WE’RE ALL GOING TO SEE IT. I PROMISE.

Filed Under: Oblivion, Trailers of the Week