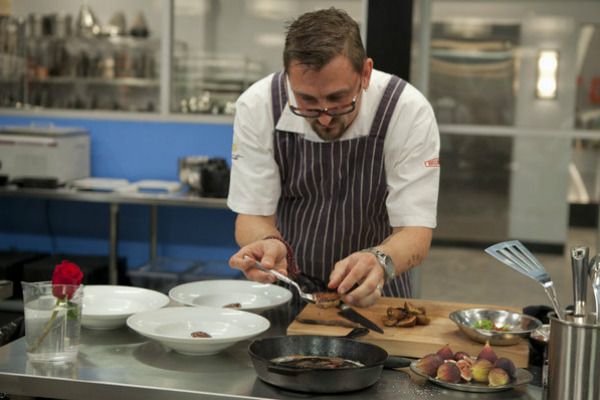 I have nothing to complain about this week: Last night’s Top Chef Masters was a good one. There was arguing, passive-aggression, a couple of great guest judges, and a damn near impossible elimination challenge (throwing together a Thai restaurant in like 10 minutes). Also: Dita von Teese chipping away at ol’ Stonewall with observations regarding how sea creatures just sliiiiiiide right down her throat. Nice.

Last week, as you may recall, Thierry was axed for some charred and gelatinous croque-madames sans oeufs served poolside to Holly Madison and her friends. It was tough, especially for Takashi, but we’ve had a week to get over it. Moving forward, as one must, the chefs are presented with oysters, rose petals, chocolate, and other aphrodisiac ingredients to prepare a sexy dish for sexy dish Dita von Teese, whose face always appears in soft focus because she’s a hologram, stupid. Curtis Stone is visibly uncomfortable describing the “arousing aromas” and “sensual feel in the mouth” of the buffet table laden with uni & co., but really, who wouldn’t be? Really? A “sensual feel in the mouth?” Art covers his own mouth at this, because he doesn’t want to get pregnant (or maybe just because he had a precognitive dream involving chocolate in a Quickfire; cue spaceship noise).

The chefs have 30 minutes, with 5000 charity dollars and immunity on the line. Cosentino, in keeping with the sexy theme, describes his need to win by explaining that he was “at the bottom of the poo pile” last week and needs to save face. Great imagery to keep in mind when, minutes later, you’re staring into Art’s breastlike (chef’s own descriptor there) meringue islands floating in a sea of milk chocolate, which Dita would like to jump into naked &#8212 since she doesn’t love chocolate, I can only assume that she’s just saying this to mess with Curtis, who says, “Nice visual!” and giggles as he chokes on his pillowy white boobie-dessert.

Next is Lorena’s cilantro-heavy tuna telitas, which are not sexy enough for Dita, followed by Takashi’s oyster-and-sea-urchin offering, which is daring and “slippery” and looks like a winner. Patricia’s trio of chawanmushi, caviar, and asparagus doesn’t look thuper thethxy to me (shot glass of off-white porridge?), but gets points for being a ménage à trois and a spicy one at that, and Chris’s foie gras and figs are well-received due to their associations with hanging out nude in a garden, feeding your lovah fruit between bites of roasted goat leg and dips into the hot tub. Last is Kerry’s seared tuna with uni, which gets an explicit response from Dita that I won’t go into here because I can tell I’m already pushing it. She likes uni. Lorena and Art are on the bottom this week, with Kerry and Takashi in the top tier. Takashi wins, though he’s worried that his wife will object to Dita’s praise about how his oyster made its way down her gullet (SEXILY).

This week’s elimination requires the chefs to get familiar with northern Thai cuisine by visiting foodie haunt Lotus of Siam (chef Saipin Chutima tied with Tyson Cole for a James Beard award for Best Chef of the Southwest in 2011; it got kind of ugly, actually) and opening a Thai restaurant of their own in 12 hours. Lorena pulls a face, because if there’s one thing you can’t pair with Thai food, it’s Doritos Locos Tacos. Patricia, on the other hand, has spent two years in Thailand, so she’s got a big advantage. Everyone’s responsible for one dish, and they have to collaborate on service, expediting, and front of the house. En route in the gossip van, Patricia opines that she thinks Lorena and Art are going to prove weak on the line. Cut to Lorena and Art’s van, where they hunch fearfully in their squashed seats and talk about how scared they are. I feel for Art. It’s hard to make larb out of a biscuit.

Dinner at LOS is “an honor,” with pork blood and lots of “wow.” Shopping is a mess of cell phones and searching for kaffir, during which time all six chefs turn into Grocery Dads, calling each other’s phones to say what they’re looking at and that they forgot what they called to ask about and generally wasting precious time. With four hours left before service, it’s tense in the kitchen: Patricia is in a bossy mood and delegates Lorena and Art to front of the house, which in Top Chef speak is a pretty serious neg. She also takes issue with Lorena’s burner-station monopoly, which moves Lorena to put Patricia in her place by hollering at her with hand gestures. Sometimes, you gotta live más! Kerry, who had been puréeing taro root as if that could make it any less taro-y, is saddled with expediting, which he does not do with flying colors. Service lags. Cosentino takes over and handles his business much better, but for some reason tacks a “oui” onto his commands, which makes him seem sort of silly. To me, not to anyone in the kitchen. Kerry, back on the line, screws over Patricia by taking his sweet time diddling with his dish while her precious duck breasts wither on the vine and what is left of her patience over-reduces. Having to start over and pressed for time, Patricia plates her protein with a few quacks left in it, hoping no one will notice (OF COURSE THEY WILL NOTICE, THEY’RE JUDGES). James Oseland sends his back, because that’s what happens when you talk smack about Art Smith in a van.

Lorena and Chris are up first, serving the usual suspects plus Grub Street’s Alan Sytsma (who, unlike Holly Madison, actually knows what he’s talking about) and Saipin Chutima. Lorena’s pisco chicken soup, a play on tom ka kai, is well-received in many respects but marred by a junglelike garnish; Chris presents an aged sirloin tartare, inspired by larb, that draws mixed reviews for being a far cry from authentic Thai but still clever and restrained — the consensus is that its merits outweigh its flaws. After a draggy wait, Art brings out a cashew-crusted chicken that misses the mark, and Takashi’s yellow curry with crispy noodles sits well with the guests, but seems to unnerve Saipin for some reason. She likes it “a little bit?” Way harsh, Thai! You’ve already heard the sad story of Patricia’s undercooked duck, which in addition to being rare is also described as being flabby, but Kerry’s braised pork belly draws raves. Ain’t them the shakes? As a whole, Saipin is impressed but wouldn’t have paid to eat at Fake Thai Restaurant 2012. Why should she? She can eat at her own for free.

To make Patricia seem less chilly, we are served an interstitial of her hugging Kerry to make amends for ruining her life in this challenge, and slipping him the ultimate in passive-aggression: “It is what it is.” I can’t wait until this phrase goes out of vogue because it means literally nothing. It is so empty and depressing. Of course it is what it is. It’s like when everyone in college had away messages with that quotation from the Damien Rice song from Closer (“life goes easy on me most of the time,” and permutations thereof). What are you getting at? What’s the point? Why undercut a hug like that?

For the first time, all of the remaining chefs are called in at once for judgment. Despite the bad pacing and lack of authenticity, most of the diners, apparently, were satisfied. Cosentino and Kerry are the favorites of the evening, and it’s Chris’s aged tartare that takes the prize and gains Parkinson’s Research ten grand. Lorena, Patricia, and Art find themselves in the punishing cellars of loserdom this time: Art’s chicken was bland and boring, Lorena’s soup was garnished with whole chiles like some sad Southwestern wreath, and Patricia’s massaman curry was too ambitious and her duck called for further explanation. Alan and Curtis gently but firmly goad Patricia into pointing the finger at Kerry for her failings, almost as if they’re trying to give her a way to save her skin this time because she’s been a formidable contestant for most of the season. And so it is, the shorter story, no love, and no glory for poor Mr. Biscuits Art Smith. Everyone is bummed that he’s leaving, especially since we’re all left with the assumption that he’s going to have to jog from Vegas back to D.C., and that’s 2,437 miles. Art predicts that he and Lorena will open a restaurant together one day, in another life, when we are all cats.

Next week, Sugar Ray Leonard and sautéing in a boxing ring. Because “fighters are a lot like chefs,” and there’s no frying in baseball.