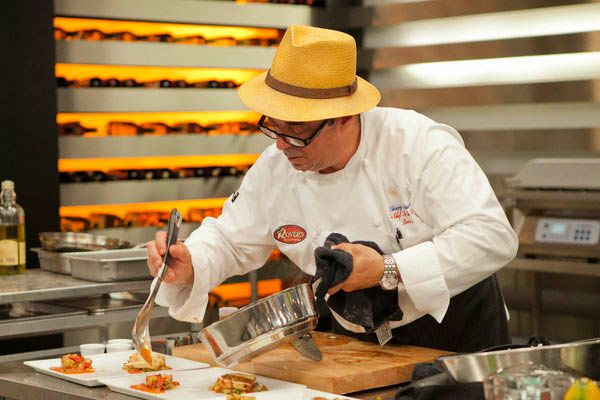 Last week on Top Chef Masters, Clark went away, exiled back to Maine or perhaps to star in a Christopher Guest movie because his hairstyle sends him right to the front of the casting line. We’re now down to seven, which would normally imply that more airtime would be spent on the food, but for some reason this season that doesn’t seem to be the case. Every opportunity to dwell on Chris Cosentino’s bacon tuna or zoom in on Takashi’s sheep-yogurt panna cotta is thrown into the garbage and replaced with too many bizarre interstitials plugging Blue Ribbon sushi or James Oseland performing three push-ups in front of Holly Madison’s friends. Why? I just don’t know. I saw my life swell and collapse in those push-ups; time crept forward at half-speed and invertebrates were born and died in the temporal distance spanned between the flex of Oseland’s elbows. It was sad.

This week’s Quickfire, with guest judges the Indigo Girls, was to make two dishes: one for Indigo Omnivore, one for Indigo “I Will Not Eat a Face.” I don’t know why so many of the guest judges on this season are mere civilians when there are zillions of foodies with burger Instagrams dying to get their paws on Patricia Yeo’s pho; the Indigo Girls didn’t seem to be super-discerning, and neither were last week’s judges, the B-52s. This means that critiques are brief and usually sort of along the lines of, “Hey! It’s food. I’ll take it!” I think that this is my main gripe with this season. There’s a lack of food-talking gravitas and discussions that go on and on dissecting the textural deficiencies of things on skewers and exactly how overpowering the truffle oil is. Maybe I’m just too attached to Colicchio. I have to say that I’m surprised by how much I enjoy new judge Francis Lam’s contributions, considering the fact that he was wearing sunglasses on camera in this episode and I really hate that. He tends to wax poetic and give credit where credit is due (compressed watermelon), whereas Curtis Stone and James Oseland are so brief it seems like they’re paying a tax when they talk for more than 30 seconds. Get some jackass from Yelp who one-stars everything (even someone who five-stars everything and begins every review at the exact minute they walk into the restaurant and ends it, 2,000 words later, after they’ve digested and the ghosts of dinner have left their bodies) and edit down their Quickfire monologues or something.

Anyhoo, Art Smith hooks up some biscuit-topped pot pies, narrowly dodging a bullet when he thinks he may have put chicken broth in the veggie version and throwing together a faceless pie in the last five minutes. Big hit with the Indigo ladies, as was Lorena Garcia’s dish. Chris does a successful duo of portobello mushroom and steak, which strikes me as surprisingly traditional from him but maybe he’s just not too comfortable with vegetarian innovation (he’s Mr. Offal, after all, and mushrooms have no organs). Takashi knocks it out of the park with two Japanese dishes, one with agedashi tofu and the other with pork, and scores another five grand for the Red Cross. He also informs the camera that he grew up without a refrigerator, which is impossible. Everyone has a refrigerator. Refrigerators preceded human life on this planet; when they fell from the sky 245 million years ago they killed the dinosaurs, their doors opened and apples fell out, and then the seeds grew into trees and then Adam and Eve happened and that’s why we’re all alive today. The losers in this Quickfire were Thierry and Patricia, who lost a battle with the clock and couldn’t broth her pho. She offers the Indigo Girls little cups of broth during judgment, a taste of what might have been. “Well, if we’d had that broth, it would have been all over!” exclaims an Indigo. All over — very vague, noncommittal, polite. Nice one, Indigo Girl. Why put Galileo’s head on the block if you don’t have to?

Onto the elimination challenge: Holly Madison, insurer of breasts and hater of garlic and onions (and thus food), is having a pool party and she wants brunch canapés for hungover guests. This is challenging, because canapés are too wee to consist of an entire egg and quail eggs, for some reason, are portrayed as being sparse in the strange desert of Las Vegas. Art goes biscuit-crazy again, sandwiching turkey patties between them and heaping them with garlic chutney because “when you cook onions and garlic, you really can’t taste them.” Oh, is that so? No, it isn’t so. Chris smokes tuna to taste like bacon and coats it with a ton of pepper and spices and sticks it on a skewer with watermelon and a tomato because it’s hot and he figures everyone wants a good ol’ cold savory. Patricia makes pulled pork but chops it in a race against her nemesis the clock, and Thierry tries to pull together croque madame with a béchamel enhanced with egg but burns his bread and sweats under his hat. Kerry makes a crab and corn fritter, which seems like a good call until you take a gander at Lorena’s super-sexxxy ricotta fritter with white chocolate and fruit compote.

At some point in here there’s a segment during which the chefs go to dinner at Blue
Ribbon Sushi and talk about a knife wound Thierry once sustained (with a description of the blood loss/velocity) and the jobs they got before they were masters of chefery (Art worked at KFC). As the giant platter of exorbitant Vegas sushi arrives, I expect there to be a twist — “Oh, you thought it would be that easy? Just creating a brunch dish? No, you’ll have to make a brunch dish for dogs using only your feet and you have to do it on the ground while shaming yourself!” — but no, no, this is just a dinner and a time-eater.

Back to business: At the party, James Oseland gets either mighty toasty on mimosas or — no, I’m pretty sure he’s mighty toasty on mimosas. Here he is, flirting with the shirtless. Here he is, on the ground in a push-up contest. There he stands, giggling until he looks like he’s going to drift away in orange floaties and wind up on Planet Ambrosia being showered in white chocolate. Enough, pal. LET’S FOCUS ON THE CANAPÉS. Art takes a dip in the pool in a Speedo and marks this as one of the highlights of his tenure on the show, revealing his newly svelte body to the world. Luckily he’s submerged when one of the other chefs snarks that he’s The Creature From the Blue Lagoon. He still “feels like Bo Derek.” Let him. Holly bites into his turkey burger and then discovers it contains garlic, airs her worries that she’ll be called DragonBreath, Queen of Mortridstank on stage later that evening, and then decides she likes it anyway. Takashi’s sheep’s milk panna cotta is another surprisingly pleasant experience for the guests, which opens the market for an I Can’t Believe It’s Sheep’s Milk brand of desserts. Patricia’s pulled pork winds up on an overtoasted bun and wearing a cape of bland sauce, so there’s that — some gloomybears reactions, especially when everybody gets excited over the prospect of pulled pork. Also not tantalizing are Thierry’s burned croques and the béchamel, which has congealed somewhere between kitchen and poolside, and Chris’s skewers, which everyone agrees are just bizarre and too spicy (Francis gives props to both, however: Thierry at least attempted to create a full brunch experience on the plate, and who can argue that Chris’s tuna bacon wasn’t innovative, if not necessarily good). Kerry, Takashi, Art, and Lorena are called in first to judge’s table. They are the favorites, but there seems to be less doubt about this among the chefs than there usually is. Lorena is the hands-down winner, getting compliments from the judges that border on metaphysical: Somebody actually claims that these fritters “made me feel loved.”

Her charity, the Alliance for a Healthier Generation, has now netted $15,000 in the fight against obesity (with fried things). Thierry, Patricia, and Chris amble in next, disappointers of culinary authority Holly Madison and this week’s losers, and it’s time for Thierry to say à bientôt. Takashi gets emotional at the loss of his great friend, and I cry because I have nothing better to do and this man thinks he grew up without a refrigerator and now has nobody who understands him. Next week, Dita Von Teese appears to strain the bones of her corset by forcing food into her distractingly voluptuous body, and Lorena and Patricia get into a don’t-boss-me
argument with yelling.

Taylor Swift's Kennedy Cradle Rob ... and Other Horror Stories From This Week's Tabloids