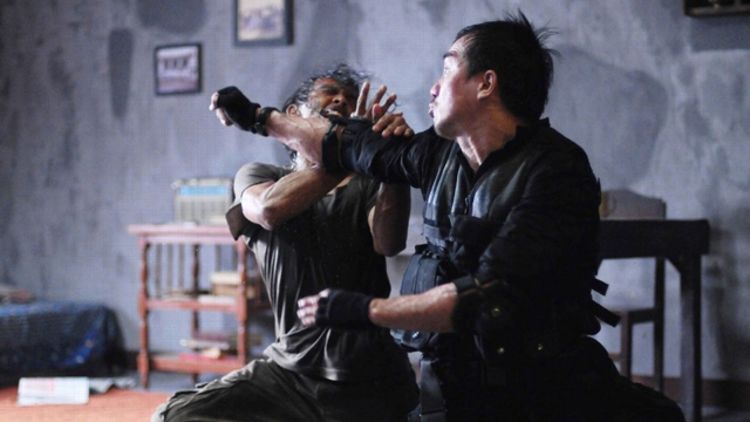 A ticking clock and a handgun are the first things you see in The Raid: Redemption. Before anything, there’s the implication of imminent violence. The promise of that opening shot is paid off pretty well once a grenade, a propane tank, and a fridge are used to level an entire floor’s worth of guys with guns, 31 minutes later.

The Raid, out on DVD now, is the film-nerd action movie of the moment. Those in the cult treat it with the same mix of awed reverence and “holy shit” glee that acolytes afford the Nevaldine-Taylor filmography, or, say, early Tarantino. The plot is “lone SWAT rookie versus a high rise full of criminals,” but that just serves as a simple skeleton for a series of ever-escalating action set-pieces. Gareth Evans’s third film arrives fully formed: jaw-dropping sequences lined up back-to-back; characters given just enough depth to give their actions weight. This is as run-and-gun as filmmaking gets. The people being photographed are actually doing as much of this as is humanly possible. The sets are bare and poorly painted; there’s a gray filter on every shot. It’s not particularly pretty. There is a premium being placed on clarity of movement. Even in the shakiest moments, you can always tell who is doing what to whom, and how they relate to one another in the frame.

It’s pretty cool, is what I’m trying to say.

In the best action movies, there’s a simplicity to the story, because simple stories make for a great spine to lay fight scenes out on. A lot of the time, this means that you have to ignore a pretty stupid plot to get to the part where Jason Statham kicks a dude through a plate-glass window. The classics of the genre strip away everything, but maintain focus on their ass-kicking machines as people. Die Hard is as much about John McClane needing to talk to someone in almost every scene as it is about the explosions and gunfights.

In The Raid, that translates into a SWAT team entering a 30-story building full of criminals and attempting to take it floor-by-floor. Halfway up, it goes wrong, and the bodies start dropping. A single rookie has to fight his way out, while keeping an injured officer and his criminal, lost brother alive.

The martial art on display throughout the film (the one at the forefront anyway, as the athletes and stuntmen here are using a large selection of disciplines) is Pencak Silat. A large part of The Raid’s appeal is seeing Silat for what is essentially the first time on the big screen. It feels like an evolutionary leap forward because the nuts-and-bolts fighting of the film doesn’t look like Muay Thai or kung fu or aikido or karate. Instead, its adaptable and deadly close-quarters approach is something brand-new to the movies. (It’s also worth pointing out that Silat is largely tied with Islam in Indonesia, making The Raid a rare action film to hit American cinemas without portraying the religion in some kind of bad light. Rama’s religion being a non-factor is perfect, because who really cares what any character believes in when he’s impaling dudes on door jambs?)

I’ve seen The Raid described a couple of ways: as a combination of brutal Thai martial arts and the storytelling of the Hong Kong action flicks of the late ’80s, or a John Carpenter version of a martial arts movie. Both are entirely accurate, and if you’re a certain kind of “bought VHS tapes at the dollar store” kind of person, either description will sell you. And sure enough, over 97 minutes, Evans ticks off his influences: There’s the lone hero working his way through a high rise full of criminals like in Die Hard, the lateral-thinking kinetics of the hammer fight from Old Boy, the floor-by-floor assault approach of Hard Boiled, the unpredictability and claustrophobia of [REC], the siege mentality of Assault on Precinct 13, and the in-fight improvisation of prime Jackie Chan movies. It’s all right there for the film nerd and bullet freak alike.

Talking about the plot and storytelling in this kind of movie is kind of perverse, though, because the real reason to watch it is seeing truly amazing athletes and martial artists do superhuman things. There is a transition over the course of the film, from gunplay and explosions to hand-to-hand combat, which brings the actual people involved in these scenes to the forefront. The big set pieces — a blackout stairwell sequence lit only by gunfire, the two-floor firefight with the exploding fridge, the hallway fight with the machete squad, the drug lab battle royale — follow the guns-to-knives-to-hand pattern in a logical progression to more up-close and physical combat with each scene.

And then there’s Mad Dog.

Yayan Ruihan’s Mad Dog is the real star of the show. Ruihan is short, relaxed-looking, thin-framed. As an actor, he has a simple, muted screen presence: When he finally engages with someone beyond one or two sentences, he starts to get scary. His fight with the squad captain Jaka is preceded with Mad Dog’s defining line: “Pulling a trigger … is like ordering takeout.” He stretches both palms out over his head; “This is the thing. This is the pulse. This is what I do.” Then he explodes into a fight that’s so brutal, you could easily call it aggravated homicide. Mad Dog is the kind of guy who just wants a good fight, but his skill has outpaced anyone and everyone he’s ever going to run into. In the climactic moment, he takes on Rama and Andi (who is twice his size), and they barely hold their own against him. The fight, about eight minutes of screen time, is long enough that it has time to have arcs for all three characters. You know a character is going to be iconic forever when he’s still winning with a shard of a fluorescent bulb jammed in his throat.

The thing is: This isn’t the kind of movie where explaining it conveys any of what it is to watch it. What makes this movie special is that Gareth Evans has uncovered the way great action films approach character and story, and has found a way to update it to serve a new, relentless model for the genre. This is where the action movie can go in the 21st century, which is someplace new, not just visually or narratively, but in human ability. The people who made it are the real new leveling-up.

You should watch The Raid. Shit gets wrecked.

Sean Witzke (@switzke) is a writer living in Northeastern PA. His other writing can be found at Supervillain.