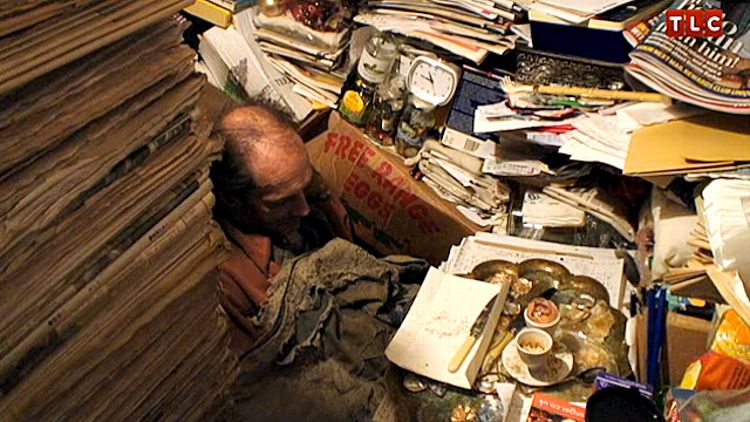 TLC certainly makes plenty of its own programming to highlight the various doings of people who occupy esoteric subcultures. But sometimes, the network reaches outside the borders of this nation and across the pond to Great Britain in order to remind us that we haven’t cornered the market on total degenerates. Hence: Obsessive Compulsive Hoarder. Here’s what you need to know.

Who Is This Now? Mild-mannered Briton Richard Wallace.

Why Are We Watching Him? He’s hoarded in his house to such a degree that he can only get from room to room by slithering over piles of stuff and through the tiny openings that remain at the top of his doorways.

How Did He Get Here? Apparently he lives in the town from Hot Fuzz, because all the villagers are PSYCHED about the upcoming Britain in Bloom competition, and they are PISSED about Richard’s slovenly yard.

What’s the Grossest Thing We See? Richard’s house is so hoarded that anything organic isn’t visible to the camera. But the most alarming thing we see is Richard lighting his gas stove, with a match, surrounded by stacks and stacks of dry paper, some of which is leaning on the edge of his stovetop.

What Does He Think the Problem Is? Richard believes that he’s creating an archive of magazines and newspapers, which he intends to scan … someday. So while he agrees that the house is not really livable, he regards it as a practical problem — in that he just needs more storage space — rather than a medical one.

(But What Does an Expert Think?) (Hoarding expert Steve Kellett visits Richard and says without ambiguity that Richard does have a mental illness: “I think Richard’s a chronic and severe hoarder. I’ve crawled into a house before.”

Why Has It Apparently Taken a TV Documentary to Address This Person’s Problem? I mean, I hate to be indelicate. But when Richard shows the camera crew his bathroom, including an utterly unusable bathtub/shower unit, he admits that he hasn’t bathed or showered in “years.” So between the lawsuit and (I assume) the body odor, Richard is kind of keeping his neighbors at a distance.

What Does This Person’s Capacity for Change Seem to Be? At first, none. In fact, as we’re first introduced to him, we learn that not only has he declined to address his hoarding, he’s gone to court to defend it (and won). But when Andy, a local landscape gardener, volunteers to help Richard clear out some branches in his yard, Richard accepts the offer — and welcomes other neighbors who join in the effort, eventually allowing Andy inside.

What Are the Consequences If He Doesn’t Act? None from outside authorities: Kellett alerts the local fire department, which sends out three firefighters to inspect Richard’s house. However, the only action they take is to put smoke detectors in every room, EVEN THOUGH the most corpulent of the firefighters briefly gets stuck in one of Richard’s rooms. Before they leave, though, one of the firefighters suggests a possible grim ending for Richard: “If he fell over and broke his leg, how’s he going to get out?”

What Have We Learned? If you don’t scan papers immediately, you probably won’t do it; just get rid of them. There might be a very nice, troubled person in your town who would be very grateful for your help in clearing out a path into and out of his house. And finally, if you plan to hoard a bunch of worthless junk, try to live somewhere other than the most tight-assed town in Britain.

Tara Ariano‘s apartment is impeccable, except for the suffocating stacks of Hoarders DVDs.

The Avengers Trailer: Let the Apparently Well-Earned Next Wave of Hype Begin!

Andre 3000, Damon Albarn, and James Murphy Get Subbed Out by Cartoons